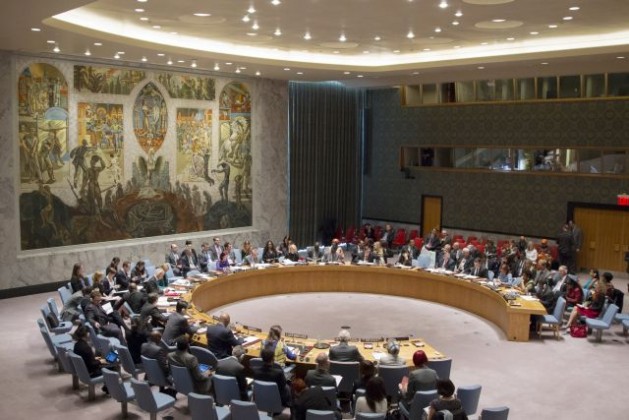 Yet despite the Beijing Platform for Action and the Security Council Resolution 1325 both committing to increasing women’s participation in peace building 20 and 15 years ago, respectively, there has been very little progress to report.

The latest available statistics show that women made up only 9 per cent of negotiators at peace tables between 1992 and 2011. That the most recent data is from 2011 shows that more work is needed even in basic areas such as data collection and reporting of women’s participation in peace building.

IPS summarises here four reasons we should value women’s participation at the peace table more, based on discussions at the 59th Commission on the Status of Women (CSW) over the past week.

Strategic objective E.1. Increase the participation of women in conflict resolution at decision-making levels and protect women living in situations of armed and other conflicts or under foreign occupation. Actions to be taken.

Strategic objective E.4. Promote women's contribution to fostering a culture of peace. Actions to be taken

Strategic objective E.6. Provide assistance to the women of the colonies and non-self-governing territories. Actions to be taken.

Often the first people invited to participate in formal peace negotiations are the people holding the guns and the last are women who have expertise in building lasting peace.

Zainab Bangura, Special Representative of the Secretary-General on Sexual Violence in Conflict, told a CSW side event on Tuesday last week, “In the Central African Republic, the only community where they were not killing each other was a community where the Christian women said, ‘These Muslim women are our sisters.’

“Why? Because the women in the community said, ‘We have lived together for the last 100 years’,” Bangura said.

In the Phillipines, Irene Santiago was a member of the government panel that negotiated peace with the Moro Islamic Liberation Front. Santiago came to the table with years of experience working with Christian, Muslim and Indigenous women leaders for peace.

Speaking at a CSW side event at the International Peace Institute (IPI) on Thursday, Santiago said that she knew that her years of experience working with civil society for peace stood her in good stead to make a significant contribution to formal peace negotiations, which she did.

Speaking with IPS, Santiago said women’s voices not only have to be heard, but that they also have to be acted on.

In Africa, women have fought to be included in peacemaking, even when their contributions have not been recognised.

Bineta Diop, Special Envoy on Women Peace and Security to the African Union, says that mediators need to be held accountable when they only invite the people who hold guns to the peace table and ignore women’s contributions.

“I have been involved in many crises where women were knocking at the door and saying we want to be at the table,” Diop said.

Ambassador Anwarul Chowdhury, known as the father of Security Council Resolution 1325, said that the determination of African women to be involved in peace negotiations should be seen as an inspiration by other countries.

Also speaking at the IPI, Valerie Hudson, co-author of ‘Sex and World Peace’, said that her research has shown that the way women are treated within a country is one of the most accurate indicators of the quality of relations that country will have with other countries.

Diop agreed with Hudson, saying that countries that are likely to fall into conflict have higher levels of discrimination and inequality.

“Discrimination against women, especially the non-participation and non-inclusion of women in democracy is … one of the root causes of the conflict,” Diop said.

“I think that if we women are violated, if women’s equality of participation is not there we cannot say that we are at peace, we are in conflict with ourselves. This is a conflict which is happening within ourselves and within the countries. We don’t have to go into the traditional description of conflict, civil conflict or fighting with another country,” Chowdhury added.

Dr. Youssef Mahmoud, Senior Adviser at the International Peace Institute also speaking at the IPI event said, “A world where 51 per cent are ignored is a dangerous world for everyone. I can’t imagine why any men would be indifferent to this.”

Several discussions at the CSW questioned why militaries were the primary actors in peace building, while non-governmental organisations (NGOs) and civil society’s expertise was not called on.

Santiago told IPS that civil society, especially women, have a lot to contribute to humanise, to concretise, and to make peace negotiations relevant to people’s lives.

Winnie Kodi from the Nuba mountains in Sudan told reporters on Monday that civil society was vital to helping indigenous communities like her own that have been affected by conflict. She said that the main way her people were able to have their voices heard was by working together with NGOs and civil society.

Chowdhury told IPS he is advocating for the U.N. and governments to hold more consultations with civil society, saying that the involvement of women and of civil society is very important.

Santiago also called for renewed focus on the important role of NGOs in the area of women, peace and security,

“Again I see that why are we focusing on the UN as the locus of change,” she said. “To me it is not, it is the means, it is an important audience, but it is not the locus of social change.

“Let us form the global civic networks that we need to bring about the local global and civil change that we need” Santiago said.

Challenging militarism and militarisation was another theme discussed during the first week of the CSW, particularly by civil society groups at the parallel NGO forum.

RT if you agree that women’s participation in peace negotiations is not an optional extra #CSW59 #WPS pic.twitter.com/VLOYPpQso6