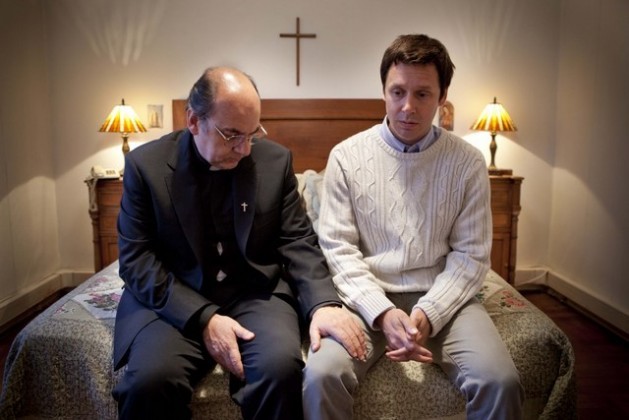 Actors Luis Gnecco (left) and Benjamín Vicuña in a scene from “Karadima’s Forest”, a film that portrays pedophile Chilean priest Fernando Karadima, seen here with one of his victims, James Hamilton, his “favourite”, who finally dared to speak out. Credit: Courtesy of Constanza Valderrama

SANTIAGO, Mar 20 2015 (IPS) - Victims of sexual abuse by Catholic priests in Latin America are taking the first steps towards grouping together in order to bolster their search for justice – a struggle where they have found a new ally: filmmaking.

“Besides entertaining us, movies urge people not to forget, to memorise what is happening to us as a society,” Chilean filmmaker Matías Lira told IPS.

He added that, with respect to the sexual abuse committed within the Catholic Church, “the media has a pending task, and society has a duty.”

“When they named Pope Francis, we felt that in the Vatican we had someone from home, someone who spoke our own language, who understood our culture; it was an enormous source of pride. But the first victims he met with were from the United State, Germany and Great Britain; he never met with us.” -- Juan Carlos Cruz

Based on this premise, Lira directed “Karadima’s Forest”, based on real events. The film, which comes out in Chile in April, tells the story of a priest who sexually and psychologically abused dozens of boys and young men, and who was one of the country’s most influential priests thanks to his enormous charisma and his reputation as a “saint” – which was even his nickname.

There is great expectation surrounding Lira’s film in Chile, a country with a highly conservative society where 67 percent of the population of 16.7 million identifies as Catholic.

The film comes after “The Club”, by Pablo Larraín, winner of the Silver Bear at the Berlin Film Festival in February, which also tackles the question of pedophile priests in Chile.

The case of Fernando Karadima is emblematic. As the parish priest of El Bosque (“the forest”), in the wealthy Santiago neighbourhood of Providencia, the priest forged an empire with the backing of high-level church authorities from the early 1980s until his retirement from his post in 2006.

An ecclesiastical court sentenced him in 2011 to “a life of prayer and penitence” for pedophilia and ephebophilia (a sexual attraction to post-pubescent adolescents), after he spent decades abusing boys and young men who trusted him, while amassing a fortune from donations to the church, according to an investigation by the Centro de Investigación Periodística (Centre for Investigative Reporting).

Journalist Juan Carlos Cruz was one of those youngsters. He met Karadima when he was 15 years old, right after his father died, when he was grieving and vulnerable.

“They recommended that I go and talk to this priest, who was considered a saint, a man of enormous kindness. He was a very influential man and it was incredible when he paid attention to me,” he told IPS.

“He told me that from then on he would be my father, that I had to make my confession only to him, and that he would be my spiritual director,” he added.

Cruz said that at the age of 15 he was dazzled by the priest’s powerful friends: ranging from then dictator Augusto Pinochet (1973-1990) to Angelo Sodano, who during the military regime in Chile was apostolic nuncio (1978-1988) and later became the Vatican’s secretary of state (1991-2006), and including businessmen, senior military officials and high-level politicians.

To confront the church’s policy of covering up the sexual abuse by priests, victims in Argentina, Chile, the Dominican Republic, Mexico and Peru created a network called Unidos (United).

In the Feb. 16 meeting held to found the network, in Mexico City, they called on Pope Francis to take effective actions and hold to account in civilian court both the perpetrators and those responsible for covering up the crimes.

In a letter to the pope, they said that only with a profound overhaul of the church and civilian trials of those responsible “will there be a beginning of the end to this huge holocaust of thousands of girls and boys sacrificed to avoid scandal and to safeguard the image and the prestige of the representatives of the Catholic Church in the world.”

One especially illustrative case, according to the new network, is that of Józef Wesołowski, a former apostolic nuncio in Santo Domingo (2008-2013) who was accused of pedophilia and is under house arrest in the Vatican, where he fled from the Dominican justice system.

“Although the Dominican courts are seeking his extradition, they’re holding him there, where he is protected,” said Cruz.

“In Latin America they step on us a little because our legal systems aren’t like those of the United States or Europe. In Philadelphia, where I live, there are 34 priests in prison, and they sentenced the vicar general to 21 years for the cover-up,” he added.

In February 2014, the United Nations accused the Vatican of violating the Convention of the Rights of the Child, because of the sexual abuse committed by its priests.

Shortly after Cruz met Karadima – who is now 84 – the priest began to sexually and psychologically abuse him.

“Psychological abuse sometimes is the most complicated: living under constant threat, under his yoke, living in fear and not being able to forgive yourself for it even once you’re grown up,” said Cruz from the United States, where he now lives.

“I consider myself an intelligent guy who has gone far. I’m vice president of a multinational corporation responsible for 130 countries. Nevertheless, I can’t forgive myself for how I let that man torture me for eight years,” he lamented.

Karadima’s horrific abuse came to light in May 2010, when Cruz and other victims recounted what they had suffered on the weekly programme Informe Semanal of the public TV station Televisión Nacional (TVN).

James Hamilton, the priest’s “favourite”, had contacted TVN after seeing a report on that channel about the aberrations committed for years by Mexican priest Marcial Maciel, the founder of the ultraconservative Legionaries of Christ congregation. Maciel had a great deal of influence in the Vatican during the papacy of John Paul II (1978-2005).

Maciel, the most famous pedophile priest in the region, who even had children despite his vows of celibacy, died in 2008, two years after Pope Benedict XVI (2005-2013) removed him from active ministry for creating a “system of power” that enabled him to lead an “immoral” double life “devoid of scruples and authentic religious sentiment.”

Advocates of the victims unsuccessfully sought to bring to a halt the beatification of Pope John Paul II, arguing that he systematically covered up the sexual abuse committed by the powerful Mexican priest.

In Chile, Karadima’s victims are now fighting the appointment of Juan Barros as bishop of the city of Osorno. According to Cruz and other victims, Barros witnessed and participated in the abuse by Karadima.

But far from listening to the victims, the Apostolic Nunciature or Vatican embassy confirmed its support for Barros, who became bishop on Mar. 21.

“That support is arrogant and stupid,” Cruz said.

Karadima’s victims also accuse Cardinal Francisco Javier Errázuriz, who was named adviser to Pope Francis, Benedict’s successor, of taking part in the cover-up. Several investigations concluded that Errázuriz turned a deaf ear for years to the victims’ complaints, when he was archbishop of Santiago.

His successor, Ricardo Ezzatti, is also accused by Karadima’s victims of helping cover up the powerful priest’s crimes.

This is one of the reasons that prompted the victims of abuses by different priests in various countries of Latin America to meet in mid February in Mexico City to join forces and try to draw attention – mainly the attention of the first Latin American pope, Francis, from Argentina – to the problem.

“When they named Pope Francis, we felt that in the Vatican we had someone from home, someone who spoke our own language, who understood our culture; it was an enormous source of pride. But the first victims he met with were from the United State, Germany and Great Britain; he never met with us,” said Cruz.

“I just want to sit down with him and tell him what we have gone through,” he said.

And that is because, even though he believes the Catholic Church in Latin America covered up the abuse by its priests, Cruz is still a fervent Catholic.

“I go to mass every Sunday,” he said. “I’m not going to let them also steal something so precious as my faith.”

Lira, the filmmaker, is also Catholic, although he said the priesthood “has a great debt to society” in Chile and the rest of the region.

“They should understand that apologising is not enough; what matters is that actions are taken,” he said.