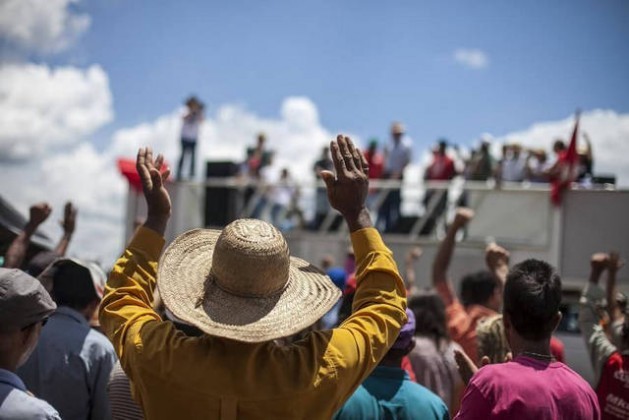 UNITED NATIONS, Mar 19 2015 (IPS) - The growing economic inequalities between rich and poor – and the lopsided concentration of wealth and power in the hands of the world’s one percent – are undermining international efforts to fight global poverty, environmental degradation and social injustice, according to a civil society alliance.

Comprising ActionAid, Greenpeace, Oxfam and Civicus, the group of widely-known non-governmental organisations (NGO) and global charities warn about the widening gap and imbalance of power between the world’s richest and the rest of the population, which they say, is “warping the rules and policies that affect society, creating a vicious circle of ever growing and harmful undue influence.”

"Inequality is about more than economics and growth – it is now at such high levels that we risk a return to the oligarchy of the gilded age. " -- Ben Phillips of ActionAid

The group identifies a list of key concerns – including tax avoidance, wealth inequality and lack of access to healthcare – as being unduly influenced by the world’s wealthiest one percent.

In a statement released Thursday, on the eve of the World Social Forum (WSF) scheduled to take place in Tunis Mar. 24-28, the group argues the concentration of wealth and power is now a critical and binding factor that must be challenged “if we are to create lasting solutions to poverty and climate change.”

“Securing a just and sustainable world means challenging the power of the one percent,” the group says.

The signatories include Adriano Campolina of ActionAid, Dhananjayan Sriskandarajah of Civicus, Kumi Naidoo of Greenpeace and Winnie Byanyima of Oxfam.

Asked about the impact of economic inequalities on the implementation of the U.N.’s highly touted Millennium Development Goals (MDGs), Ben Phillips, campaigns and policy director at ActionAid International, told IPS economic inequalities have meant that in many countries progress on poverty reduction has been much slower than it would have been if growth had been more equal.

For example, he said, Zambia has moved from being a poor country (officially) to being (officially) middle income. Yet during that time the absolute number of poor people has increased.

Papua New Guinea has the highest growth in the world this year and won’t meet any MDG, because the proceeds of growth are so unequally shared, he pointed out.

Speaking on behalf of the civil society alliance, Phillips said inequality has also been the great blind spot of the MDGs – even when countries have met the MDGs they have often done so in a way that has left behind the poorest people – so goals like reducing maternal and infant mortality have been met in several countries in ways that have left those at the bottom of the pile with little or no improvement.

The four signatories say: “We will work together with others to tackle the root causes of inequality. We will press governments to tackle tax dodging, ensure progressive taxes, provide universal free public health and education services, support workers’ bargaining power, and narrow the gap between rich and poor. We will together champion international cooperation to avoid a race to the bottom.”

The statement also says that global efforts to end poverty and marginalisation, advance women’s rights, defend the environment, protect human rights, and promote fair and dignified employment are all being undermined as a consequence of the concentration of wealth and power in the hands of a few.

“Decisions are being shaped in the narrow interests of the richest, at the expense of the people as a whole,” it says.

“The economic, ecological and human rights crises we face are intertwined and reinforcing. The influence of the one percent has increased, is increasing, and ought to be diminished,” the group warns.

People’s mobilisation and active citizenship are crucial to change the power inequalities that are leading to worsening rights violations and inequality, the group says.

However, in all regions of the world, the more people mobilise to defend their rights, the more the civic and political space is being curtailed by repressive action defending the privileged.

“We therefore pledge to work together locally, nationally and internationally, alongside others, to uphold and defend universal human rights and protect civil society space. A more equal society that values everyone depends on citizens holding the powerful to account.”

Phillips told IPS even the U.N.’s proposed Sustainable Development Goals (SDGs), to be approved at a summit meeting of world leaders in September, will not be achievable if economic inequalities continue.

As leading economist Andy Sumner of King’s College, London has demonstrated, “we find in our number-crunching that poverty can only be ended if inequality falls.” Additionally, healthy, liveable societies depend on government action to limit inequality.

It is also a question of voice, and power. In the words of Harry Belafonte, a Hollywood celebrity and political activist: “The concentration of money in the hands of a small group is the most dangerous thing that happened to civilization.”

Or as Jeff Sachs, a widely respected development expert and professor at Columbia University, has noted: “Corporations write the rules, pay the politicians, sometimes illegally and sometimes, via what is called legal, which is financing their campaigns or massive lobbying. This has got completely out of control and is leading to the breakdown of modern democracy.”

Phillips said tackling inequality is core to progress on tackling poverty – both because extreme and growing economic inequality will undermine poverty reduction and because the warping of power towards the one percent is shifting the focus of governments away from their citizens and towards corporations.

“Inequality is about more than economics and growth – it is now at such high levels that we risk a return to the oligarchy of the gilded age. We need to shift power away from the one percent and towards the rest of society, to prevent all decisions being made in the narrow interests of a privileged few,” he declared.