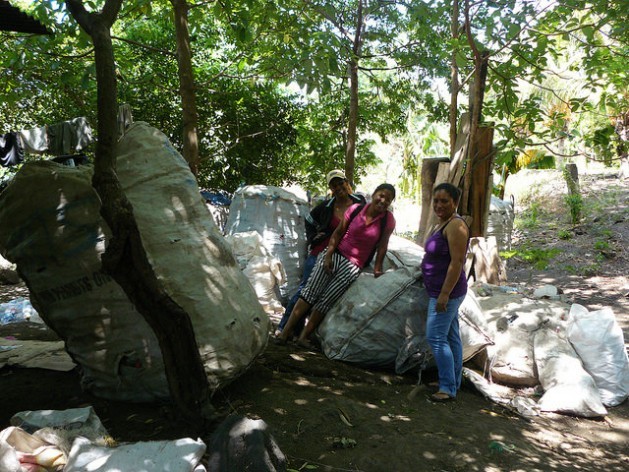 Women from the community of Balgüe working with waste materials donated to the Association of Women Recyclers of Altagracia on the island of Ometepe in Nicaragua. Credit: Karin Paladino/IPS

ALTAGRACIA, Nicaragua, Sep 7 2015 (IPS) - A group of poor women from Ometepe, a beautiful tropical island in the centre of Lake Nicaragua, decided to dedicate themselves to recycling garbage as part of an initiative that did not bring the hoped-for economic results but inspired the entire community to keep this biosphere reserve clean.

It all began in 2007. María del Rosario Gutiérrez remembers her initial interest was piqued when she saw people who scavenged for waste in Managua’s garbage dumps fighting over the contents of bags full of plastic bottles, glass and metal.

How much could garbage be worth for people to actually hurt each other over it? she wondered. She was living in extreme poverty, raising her two children on her own with what she grew on a small piece of communal land in the municipality of Altagracia, and the little she earned doing casual work.

Gutiérrez talked to a neighbour, who told her that in Moyogalpa, the other town on the island, there was an office that bought scrap metal, glass and plastic bottles.

The two women checked around and found in their community a person who bought waste material from local hotels, washed it and sold it to Managua for recycling.

So Gutiérrez, who is now 30 years old, got involved in her new activity: every day she walked long distances with a bag over her shoulder, picking up recyclable waste around the island.

Her neighbour and other poor, unemployed women started to go with her. Then they began to go out on bicycles to pick up garbage along the roads tossed out by tourists, selling the materials to a middleman.

“It wasn’t a lot of money, but it was enough to put food on our tables. And since we didn’t have jobs, it didn’t matter to us how much time it took, although the work was really exhausting at first,” Gutiérrez told IPS. 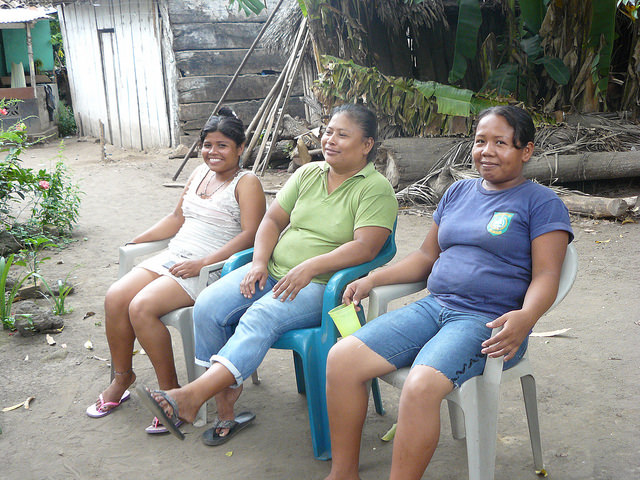 María del Rosario Gutiérrez (centre), with her daughter María and another member of the Association of Women Recyclers of Altagracia, Francis Socorro Hernández, rest after a day collecting and processing garbage on the island of Ometepe, in Nicaragua. Credit: José Adán Silva/IPS

Women filling enormous bags with scraps of trash have now become a common sight along the streets on the island.

Miriam Potoy, with the Fundación entre Volcanes, said her non-governmental organisation decided to support women who were scavenging for a living, starting with a group in Moyogalpa.

“We initially helped them with safety and hygiene equipment, then with training on waste handling and treatment and the diversified use of garbage, so they could sell it as well as learn how to make crafts using the materials collected, to sell them to tourists and earn an extra income,” she told IPS.

Impressed by the women’s efforts, other institutions decided to support them as well.

The Altagracia city government gave them a place to collect, classify and sort the waste, tourism businesses that previously separated their garbage to sell recyclable materials decided to donate them to the women, and food and services companies provided equipment and assistance.

Solidarity and cooperation with the group grew to the point that the city government obtained funds to pay the women nearly two dollars a day for a time, and provide them with free transportation to take their materials to the wharf, where they were shipped to the city of Rivas. From there, the shipments go by road to Managua, 120 km away.

“The community appreciates the women’s work not only because they help keep the island clean, which has clearly improved its image for tourists, but also because they have showed a strong desire to improve their own lives and their families’ incomes,” said Potoy.

And they have done this “by means of a non-traditional activity, which broke down the stereotype of the role women have traditionally played in these remote rural communities,” she said.

Francis Socorro Hernández, another woman from the first batch of recyclers, told IPS that at the start “it was embarrassing for people to see us picking up garbage.”

But she said that after taking workshops on gender issues, administration of micro-businesses, and the environment, “I realised I was doing something important, and that it was worse to live in a polluted environment, resigned to my poverty – and I stopped feeling ashamed.” 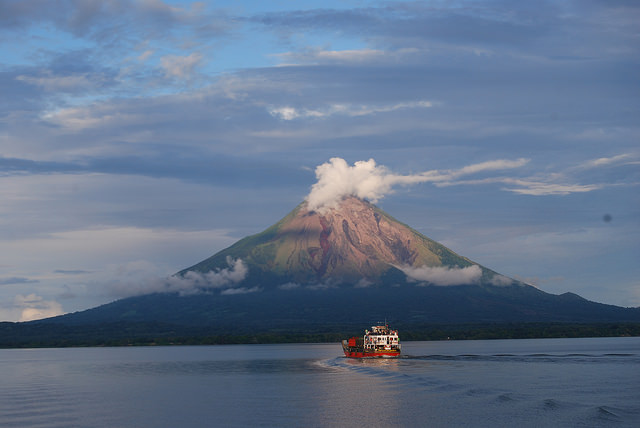 The Concepción volcano, one of the two that are found on the island of Ometepe in the middle of Lake Nicaragua, seen from the port of San Jorge in the western department or province of Rivas. Credit: Karin Paladino/IPS

Their work also inspired other initiatives. For example, Karen Paladino, originally from Germany but now a Nicaraguan national, is the director of the community organisation Environmental Education Ometepe, which works with children and young people on the island in environmental awareness-raising campaigns.

When Paladino learned about the work of the recyclers, she got students and teachers in local schools to support their cause, organising clean-up days to collect waste which is donated to the women’s garbage collection and classification centre.

Ometepe is a 276-sq-km natural island paradise in the middle of the 8,624-km Lake Nicaragua or Cocibolca, in the west of this Central American nation of 6.1 million people.

Not everything is peaches and cream

Of the 10 women who started the collective – now the Association of Women Recyclers of Altagracia – six are left.

They continue to scavenge for recyclable waste material, removing it from the island and shipping it to Managua, where it is sold. They make enough for their families to scrape by.

Gutiérrez said the mission has been difficult because of the high cost of transport, the job insecurity, and the scant financing they have found.

“We have always had support, thank God; the city government supported us, some hotels have too, people from the European Union gave us funds for improving the conditions of the landfill,” she said.

“But we need more funds, to be able to collect and transport the material, process it, and remove it from the island,” she added. 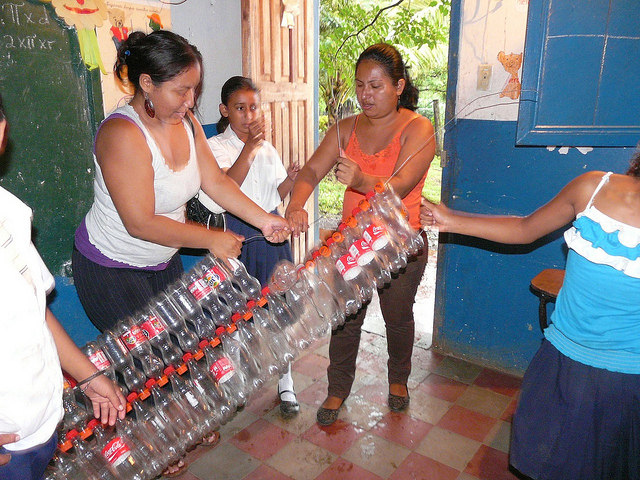 Students and mothers from a school in the city of Altagracia make wastepaper bins using disposable bottles. It is one of the numerous recycling initiatives that have emerged on the island of Ometepe in Nicaragua, inspired by a group of women who organised to collect and process garbage. Credit: Karin Paladino/IPS

With backing from the EU, the city government of Moyogalpa was able to improve the garbage dumps of the island’s two municipalities. Now there are large sheds in both dumps, where organic material is treated, as well as containers for producing organic compost using worms, and rainwater collection tanks.

The two municipalities also gave the recyclers plots of land for growing their own vegetables and grains for their families.

But the efforts and the solidarity were not sufficient to keep some of the women from dropping out.

As global oil prices plunged, the value of waste products also dropped, and profits did the same, which discouraged some of the women who went back to what they used to do: combining farm work with domestic service.

“I was really committed to the work of collecting garbage, but all of a sudden I felt that the project wasn’t doing well and I needed to feed my family, so I went with my husband to plant beans and vegetables to earn a better income,” María, one of the former members, told IPS.

“But I still collect waste products anyway, and although I’m not participating anymore, I donate them to my former mates in the collective,” said María, who did not give her last name.

But while some of the women dropped out, others joined. “The waste keeps pouring in, and support for our work is going to grow. Our families back us and we are enthusiastic,” one of the new women, Eveling Urtecho, told IPS.

With Gutiérrez’s leadership, backing from the city government, and renewed assistance from the EU, the women are confident that their incomes and working conditions will soon improve.

Ometepe – which means ‘two mountains’ in the Nahuatl tongue – is visited by an average of 50,000 tourists a year, and at least 10 million tons of plastic enter the island annually, according to figures from local environmental groups.

The association of Altagracia gathers between 1,000 and 1,200 kg of plastic a month, and their counterparts in Moyogalpa collect a similar amount.

Until the women launched their revolution, most of the waste in Ometepe ended up strewn about on the streets, in rivers and in backyards, or was burnt in huge piles. When it rained, the water would wash the refuse into the lake.