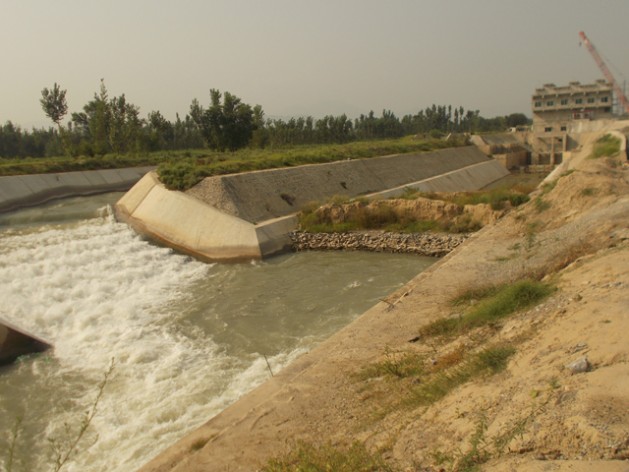 Small dams are being contructed in Mardan, one of the 26 districts of Khyber Pakhtunkhwa province in an effort to provide some electricity to people. Pakistani people remain without electrcity for almost 12 hours on an average. Credit: Ashfaq Yusufzai/IPS

PESHAWAR, Pakistan, Oct 22 2015 (IPS) - “We are lucky a local dam will give us cheap and uninterrupted power supply. Currently, we remain without electricity for 14-16 hours every day,” Muhammad Shafique, a schoolteacher in Upper Dir, told IPS.

Celebrated cricketer Imran Khan, whose Pakistan Tehreek Insaf party rules the Khyber Pakhtunkhwa (KP) province, recently laid the foundation stone for a hydropower project in Lower Dir, one of the province’s 26 districts, to cope with shortage of electricity.

“People are jubilant over the construction of the dam as it will end power outages and consumers will get smooth supply of power. Children, who currently miss schools due to lack of electricity will have enough power for their needs. Electricity will help patients and hospitals and please 65 per cent of the population associated with farming,” Shafique said.

Lack of electricity has brought lives to a standstill, not only in KP but also in other parts of the country and the people experienced load shedding, or rolling blackouts, in rural areas for 20 hours a day and in urban areas for 16 hours.

KP has planned construction of 365 small dams. “The first dam in Lower Dir will be completed in four years and will produce 40 megawatts electricity,” KP chief Minister Pervez Khattak told IPS in an exclusive interview.

It will cost 117 million US dollars but will resolve the problem of electricity not only in Lower Dir but would also supply it to the adjacent districts, he said.

Not only unhampered supply but the consumers will pay $ 0.0393 per unit, contrary to $ 0.1965 Rs20 they are currently paying to the federal government.

Construction of four other small dams is also in progress, he explained.

In Pakistan, the federal government was responsible for power-related projects until 2010, when a constitutional amendment was passed authorizing four provinces to start their own energy projects.

KP is the first province to launch a project. Pakistan produced 40 per cent electricity from imported furnace oil due to which the people paid more. The militancy-stricken province located near the Federally Administered Tribal Area is immensely rich in water resources.

“We are focusing on construction of small power houses across the province to develop industries as well as provide relief to people in daily lives from endless spells of power outages,” KP information minister Mushtaq Ahmed Ghani told IPS.

National Transmission and Dispatch Company (NTDC), which manages the power generation says the country produced 7,500 megawatts of electricity against demand of 12,000 megawatts. The hydel generation has been affected due to reduction in water outflow from major water reserves due to closure of canals.

Meanwhile, the utility said 800 megawatts of electricity production has been halted by suspension of gas supply to Uch-I and Uch-II power plants following pipeline explosion in violence-riddled province of Balochistan.

Senator Muhsin Aziz, chairman of the KP Investment Board, told IPS that excessive power cuts had brought industrial activities in the province to a standstill.

“About 300 industrial units have been closed because of lack of electricity due to which 20,000 laborers have become jobless,” he said. Affluent people are switching over to diesel and gas-run electricity generators in urban areas while the poverty-stricken people in rural settings have to bear power cuts in scorching heat, he added.

We are prevailing upon the federal government to ensure power supply to the province which has undergone huge losses in battle against militancy but all requests had fallen on deaf ears.

Farmers, for their part, are converting their tube-wells to solar energy.

“We have installed solar system to operate our tube-wells. The system is more expensive and therefore, small farmers couldn’t afford it,” Musafir Khan, a farmer in Mardan district, said.

Speaking to IPS via telephone, Khan said that lack of electricity had caused poverty among those who owned agricultural land because solar system cost about $5,000, an amount not affordable for the farmers.

“We have pinned on Machi hydropower project launched by the provincial government for our electricity needs,” he said. One of the projects is being constructed in Mardan, one of KP’s districts that will be completed within two years. The powerhouse will produce 2.6 megawatts of electricity that will be supplied to the local population.

Protests against power outages have become common features not only in KP but in the rest of the country, as well.

On August 8, stick-wielding protestors came out on roads against load shedding and attacked a grid station and damaged machines and burned records. “For the past three months, we remain without electricity for 16 hours, which is height of injustice. We don’t have water for daily use and people were becoming ill for want of water,” said Jamal Shah, one of the protestors.

A former chairman of Water and Power Development Authority (WAPDA) told IPS the government must construct new dams to cater to the growing demand. “The government has been dragging its feet on the construction of Kala Bagh Dam for the last 20 years. The reservoir once constructed would provide surplus electricity to WAPDA that can be exported,” he said.

The issue of Kala Bagh Dam has been politicized as three of the four provinces had rejected its construction due to farmer concerns that the dam will render their land uncultivable due to salt.

“There is no harm in the dame and we need to solve it politically,” he said. “Without building Kala Bagh dam, we cannot end electricity problems.”