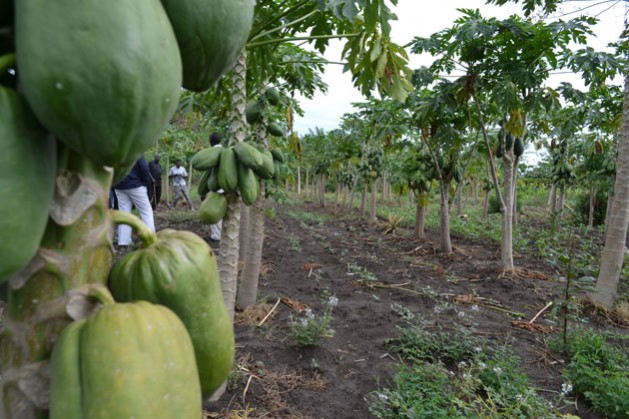 A Climate Smart Village in Western Kenya. Many African countries have pledged to invest in Climate Smart Agriculture as a way of mitigating climate change. Credit: Isaiah Esipisu/IPS

“If you study carefully what has been submitted by the developed countries like, Russia, USA and EU compared to that from poor countries, you will clearly see that goalposts have been shifted to have Africa bare mitigation and adaptation costs, which goes against the principle of Common But Differentiated Responsibility and Respective Capacity (CBDR+C) of the Convention” said Sam Ogallah, the Programme Manager at the Pan African Climate Justice Alliance (PACJA) – the umbrella organisation that brings together over 1000 African civil society organisations.

At the previous UNFCCC negotiations, countries agreed to publicly outline climate actions they intend to take, geared towards mitigation and adaptation to the changing climatic conditions, in a pact that came to be known as Intended Nationally Determined Commitments.

But just weeks after the submission deadline, African civil society organisations feel that rich countries, which are responsible for global warming, are taking advantage of poor countries who are already suffering the effects of climate change.

According to a recent report titled Fair Shares: Civil Society Equity Review of INDCs, spearheaded by Oxfam International, PACJA and partners, there is a big gap between what it will take to avoid catastrophic climate change, and what countries have proposed so far.

The report points out that the ambitions of all major developed countries (in regard to their INDCs submitted to the UNFCCC) fall well short of their fair share, which include not only domestic action but also international financial contribution.

The assessment of fair shares used an ‘equity range’ taking into account historical responsibilities and considering countries’ contribution to climate change in terms of cumulative emissions since an agreed date. Also it took into account countries’ capacity to take climate actions using national income over what is needed to provide basic living standards, as the principal indicator.

“This is not a fair trend, it negates equity and justice but let us not also forget that we are all in this one climate change boat, whether developed or developing countries and when the boat sinks, we sink together,” said Ogallah.

These countries include Kenya, the Marshall Islands, China, Indonesia and India. Brazil’s INDC represents slightly more than two thirds of its fair share.

Kenya for example, has pledged to expand its geothermal, solar and wind energy production among other renewable and clean energy options as a way of its mitigation to climate change.

In less than one year, after President Uhuru Kenyatta commissioned the two major geothermal power plants with a total capacity of 280 megawatts, Kenya has become the world’s eighth largest supplier of geothermal energy with a total installed capacity of 585 megawatts. This represents five percent of the total global geothermal production, as rated by the World Geothermal Council.

The country also seeks to expand tree cover to at least ten percent, and to embrace climate smart agriculture in as outlined in the country’s National Climate Smart Agriculture Framework.

India and Indonesia also exceeded their fair share by pledging to mitigate climate change through production of clean energy, conservation of nature, and efficient waste disposal.

According to Ed Pomfret, Oxfam’s Global Head of the GROW Campaign (aimed at fixing the global food system), the Paris Agreement will be judged on three main criteria.

First, there must be aggregation of INDCs and the willingness of governments to recognise the inadequacy and unfairness of collective and individual efforts.

There is also need for commitment to mechanisms in the new agreement to ensure that governments increase ambition in accordance with clear equity principles in the coming years. Pomfret said there needs to be the provision of significantly scaled-up finance, technology and capacity-building support for developing countries to mitigate and adapt to climate change, and address loss and damage.

As African civil societies drum up ambitions, some governments have rejected notions of ‘fair shares,’ citing the uniqueness of their particular ‘national circumstances’ and their ‘right’ to determine their own level of climate ambitions.

But according to PACJA, “justice, fairness and equity at the forthcoming round of negotiations in Paris are not negotiable,” said Ogallah. “The current and the future generations’ survival highly depend on the outcome of these negotiations, they will never forgive us if at all we do not get it right,” he told IPS.

The civil society plan to mount pressure on developed countries during the Paris negotiations to ensure they take responsibility for their actions and account for historical injustices.

“We have no choice but to work towards saving the planet,” said Ogallah.