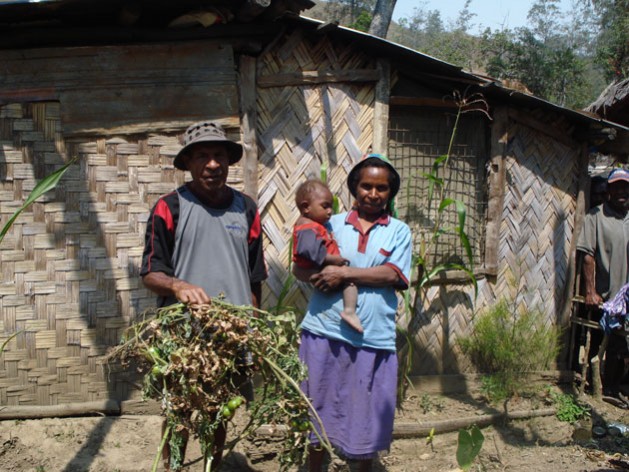 GOROKA, Eastern Highlands Province, Papua New Guinea, Nov 13 2015 (IPS) - An estimated one-third of the population of Papua New Guinea, the most populous Pacific Island state, is now suffering in from the country’s worst drought this century and experts predict El Nino’s influence will carry on through March 2016.

Dickson Guina, Chairman of the National Disaster Committee, told IPS that 2.4 million people across most of the nation’s 22 provinces are confronting a critical lack of food and water. There are also reports of many schools and hospitals forced to close as water shortages disrupt their operations.

“Our most urgent issue is water. We don’t have a river close by which we can use, so we depend on rain for drinking. But there is only one water tank for every 10 households, which is not enough,” Mangab Selau, a local resident said.

“We are now drinking well water, which is not safe for our children,” another villager, Hilda Jerome, added.

More than 80 per cent of the nation’s 7.3 million people live in rural areas and rely on subsistence agriculture for their food needs. But since the dry season began in May, rivers and rain water catchments have dried up, while staple crops, such as sweet potato and taro, have perished in the arid conditions. The central mountainous highlands region where 40 percent of people live, is the worst affected with further devastation of village food gardens by frost in areas of higher altitude such as Enga Province.

The last extreme drought occurred in the country in 1997-98, when approximately 1 million people, or 20 per cent of the population were severely affected.

“Many small rivers are dried up and when passing by a larger river it is always very crowded with people. There is now more contamination of these water sources and, as many people do not boil or treat their water, this has led to more gastro-intestinal illnesses,” he said. Forty per cent of Papua New Guineans have access to safe drinking water, while diarrhoea is the cause of 13 percent of under-five child deaths, according to the World Health Organisation.

Many other health facilities in the area have had to close for periods due to lack of water, including the only two hospitals in neighbouring Simbu Province, Dooley added.

Papua New Guinea, located south of the equator and northwest of Fiji in the southwest Pacific Ocean, experiences tropical monsoons from November to March or April and is one of the wettest countries in the world, with an average annual rainfall of 3,142 millimetres.

However, the dry season, which extends from May to October, can be severe under the influence of the El Nino Southern Oscillation (ENSO) climate phenomenon. This occurs when an increase in sea surface temperatures and rainfall in the eastern Pacific Ocean generates greater drought conditions in the region’s west, typically every 3-7 years. Other island states across the region, including Fiji, Tonga and the Solomon Islands, are also bearing the brunt of extreme weather under this year’s El Nino.

Meanwhile the people of Avaninofi village in the Eastern Highlands, which has a population of 6,700, have experienced crop failure and face a grave lack of food until early next year. Women, who are primarily responsible for growing and harvesting crops, are struggling to find alternative sources of sustenance.

“The soil is very hard and we have tried irrigating it with river water, but it has not helped….we are surviving on bananas. I take two or three to cook for the children to eat before going to school. Then in the afternoon I look for other means to cook for the family,” Lisa Ovifa, a farmer in Avaninofi, told IPS.

The next rains are expected in November. “But when the rain comes, the gardens will take some time to recover….I don’t know how we will survive,” Ovifa said. After planting, it will take three months for cassava and sweet potatoes to grow, five months for taro and nine months for African Yams.

Climate change will further increase the devastating consequences of extreme weather on food production in the future, Luanne Losi, Adaptation Policy Analyst at the National Office of Climate Change and Development, commented.

Annual air temperatures in Papua New Guinea are predicted to increase over the next 80 years by up to 2.9 degrees Celsius in the worst case scenario, reports the Pacific Climate Change Science Program. The trend will place greater heat stress on crops and hasten their deterioration after harvesting.

“I have noticed that the day and night temperatures are much hotter than they were many years ago…..climate change has made our lives as food growers much harder, especially because of the hotter days. It is much harder to work in the more extreme heat and the heat causes our food crops to wither and dry up,” Selau, in Siar, said. Women food growers in the village are trying to improve productivity by keeping seedlings in moist swampy areas during the arid months, then retrieving them for planting when the monsoons arrive.

Jenifa Kena of the Eastern Highlands Women in Agriculture development organisation, who is involved in implementing the national climate change awareness and food security program, is trying to prepare rural highland communities for the impacts of natural disasters by encouraging farmers to cultivate more drought tolerant African Yams and preserve them as yam powder for cooking during the dry season.

Between now and the first quarter of 2016, the United Nations Office for the Coordination of Humanitarian Affairs (UNOCHA) warns that repercussions of the current drought are likely to intensify, placing 4.7 million people at risk in 11 South Pacific countries.

In Papua New Guinea, traditional coping mechanisms will be vital to averting the escalation of hunger during the next five months. Mutual social and cultural obligations between members of Melanesian clans and extended families which have, for generations, provided a supportive safety net for those enduring hardship and deprivation, will be no less important now, particularly in rural and remote areas.