NEW DELHI, Jan 14 2016 (IPS) - The agreement reached in December, 2015 at the 21st Conference of the Parties under the United Nations Framework Convention on Climate Change (UNFCCC) is a major step forward in dealing with the challenge of climate change. The very fact that almost every country in the world signed off on this agreement is a major achievement, credit for which must go in substantial measure to the Government of France and its leadership. However, in scientific terms, while this agreement certainly brings all the Parties together in moving ahead, in itself the commitments that have been made under the Intended Nationally Determined Contributions (INDCs) are quite inadequate for limiting temperature increase to 2 degrees Celsius by the end of this century relative to pre-industrial levels. 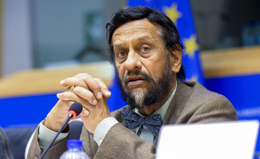 Any agreement on climate change has to take into account the scientific assessment of the impacts that the world may face and the risks that it would have to bear if adequate efforts are not made to mitigate the emissions of greenhouse gases (GHGs). Scientific assessment is also necessary on the level of mitigation that would limit risks from consequential impacts to acceptable levels. The Fifth Assessment Report (AR5) of the Intergovernmental Panel on Climate Change (IPCC) has come up with a clear assessment of where the world is going if it moves along business as usual. The AR5 clearly states that without additional mitigation efforts beyond those in place today, and even with adaptation, warming by the end of the 21st Century will lead to high to very high risk of severe, widespread and irreversible impacts globally. Adaptation and mitigation are complementary strategies for reducing and managing the risks of climate change. Correspondingly, substantial emissions reductions over the next few decades can reduce climate risks in the 21st Century and beyond, increase prospects for effective adaptation, reduce the costs and challenges of mitigation in the longer term and contribute to climate-resilient pathways for sustainable development.

In the AR5, five Reasons For Concern (RFCs) aggregate climate change risks and illustrate the implications of warming and of adaptation limits for people, economies and ecosystems across sectors and regions. The five RFCs are associated with: (1) Unique and threatened systems, (2) Extreme weather events, (3) Distribution of impacts, (4) Global aggregate impacts, and (5) Large scale singular events. These RFCs grow directly in proportion to the extent of warming projected for different scenarios.

Substantial cuts in GHG emissions over the next few decades can substantially reduce risks of climate change by limiting warming in the second half of the 21st century and beyond. Cumulative emissions of CO2 largely determine global mean surface warming by the late 21st century and beyond. Limiting risks across RFCs would imply a limit for cumulative emissions of CO2. Such a limit would require that global net emissions of CO2 eventually decrease to zero and would constrain annual emissions over the next few decades. But some risks from climate damages are unavoidable, even with mitigation and adaptation. This results from the fact that there is inertia in the system whereby the increased concentration of GHGs in the earth’s atmosphere will create impacts which are now inevitable.

The Paris agreement is an extremely significant step taken by the global community, but to deal effectively with the challenge ahead, a much higher level of ambition would be required by all the countries of the world than is currently embodied in the INDCs. A review of the INDCs is due to take place only in 2018 and 2023. This may be too late, because a higher level of ambition will need to be demonstrated urgently, if the world is to reduce emissions significantly before 2030. Delaying additional mitigation to 2030 will substantially increase the challenges associated with limited warming over the 21st century to below 2 degrees Celsius relative to pre-industrial levels. And, if the global community is serious about evaluating the impacts of climate change within a limit of 1.5 degrees Celsius above pre-industrial levels, then stringent mitigation actions will have to be taken much earlier than 2030. If early action is not taken, then a much more rapid scale up of low carbon energy over the period 2030 to 2050 would become necessary with a larger reliance on carbon dioxide removal in the long term and higher transitional and long term economic impacts.

In essence, Paris has to be seen as the beginning of a journey. If the world is to minimize the risks from the impacts of climate change adequately, then the public in each country must demand a far more ambitious set of mitigation measures than embedded in the Paris agreement. That clearly is the challenge that the world is facing, and the global community must take in hand urgently the task of informing the public on the scientific facts related to climate change as a follow up to Paris. Then only would we get adequate action for risks being limited to acceptable levels.