Opinion: Increasing Productivity Key to Revive Growth and Support Sustainable Development in Asia and the Pacific

The author is an Under-Secretary-General of the United Nations and Executive Secretary of ESCAP. She has been the UN’s Sherpa for the G20 and previously served as Governor of the Central Bank of Pakistan and Vice President of the MENA Region of the World Bank. The full Economic and Social Survey of Asia and the Pacific 2016 may be downloaded free of charge at http://www.unescap.org/publications/economic-and-social-survey-asia-pacific. 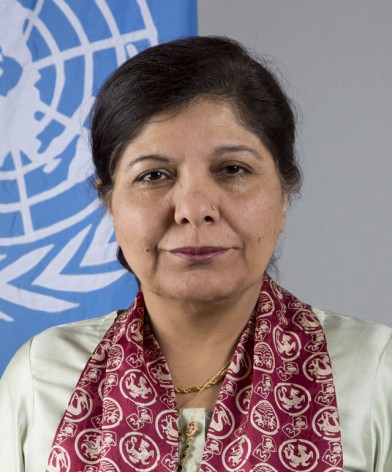 BANGKOK, Thailand , Apr 28 2016 (IPS) - The Asia-Pacific region’s successful achievement of the 2030 Agenda for Sustainable Development needs to be driven by broad-based productivity gains and rebalancing of economies towards domestic and regional demand. This is the main message of the Economic and Social Survey of Asia and the Pacific 2016, published today by the Economic and Social Commission for Asia and the Pacific. Such a strategy will not only underpin the revival of robust and resilient economic growth, but also improve the quality of growth by making it more inclusive and sustainable.

How should Asia-Pacific policymakers go about implementing such a strategy? Approaches by developing Asia-Pacific economies that are tilted more towards reliance on export-led economic recovery will be ineffective under the current circumstances. Despite extraordinary measures, global aggregate demand remains weak and China’s economic expansion is moderating. The impact of further loosening of monetary policy is also likely to remain muted, and is not advisable. The key reason is a confluence of macroeconomic risks that are clouding the economic outlook, such as low commodity prices affecting resource-dependent economies, volatility in exchange rates, as well as growing private household and corporate debt, the impact of which is likely to be complicated by the ambiguous path of interest rate increases to be pursued by the United States.

The contribution of export-led economic growth to overall development of economies, supported by low interest rates and rising private debt, seems to have plateaued, with economic growth in developing Asia-Pacific economies in 2016 and 2017 forecast to marginally increase to 4.8% and 5% respectively from an estimated 4.6% in 2015. This is considerably below the average of 9.4% in the pre-crisis period of 2005-2007.

Along with the economic slowdown, progress in poverty reduction is slowing, inequalities are rising and prospects of decent employment are weakening. At the same time, rapid urbanization and a rising middle class are posing complex economic, social, and environmental and governance challenges. Such conditions can undermine the significant development successes of the region in recent decades, making it more difficult to deal with the unfinished development agenda, such as lifting 639 million people out of poverty. Had inequality not increased, approximately 200 million more people could have been lifted out of poverty in the three most populous countries of the region alone.

To overcome these challenges, revive the region’s economic dynamism and effectively pursue the 2030 Agenda, policymakers are advised to use all available policy levers, including countercyclical fiscal policy and supportive social protection measures, which critically calls for raising domestic resources. Such interventions would not only support domestic demand but also strengthen the foundations for future productivity-led growth by targeting areas such as: labour quality, including knowledge, skills, and health of the workforce; innovation through trade, investment and R&D adequate infrastructure in transport, energy and ICT; and access to finance, especially by SMEs.

Fiscal measures, underpinning such initiatives, should be accompanied by sustained reforms towards efficient and fair tax systems which deliver the necessary revenues for the required investment in sustainable development

Sustained increases in domestic demand will also require steady growth in real wages. This requires linking labour productivity more closely to wage levels. Strengthening the enabling environment for collective bargaining is one necessary component in the policy arsenal of governments, with the enforcement of minimum wages as another important policy tool.

The recently-adopted Sustainable Development Goals provide an entry point to strengthen productivity. For instance, raising agricultural productivity and thus lifting rural households income must be the center of the focus to end poverty (Goal 1), to end hunger and achieve food security (Goal 2). This is because agriculture accounts for one in four workers in the region and more than half of the region’s people live in rural areas. Efforts to eradicate poverty and increase agricultural productivity would also foster development of the rural sector and encourage industrialization (Goal 9).

Higher levels of productivity in agriculture will also free-up labour, which would be available to work in the non-agricultural sector. It is therefore imperative to consider a broader development strategy that moves towards full and productive employment (Goal 8) to accommodate the “agricultural push” of labour. This will require mechanisms to provide, particularly those with low skills, access to quality education and lifelong learning (Goal 4).The need to provide quality education cannot be overemphasized in view of the skills bias of modern technology, which reduces the pace of absorption of unskilled labour released from the agricultural sector.