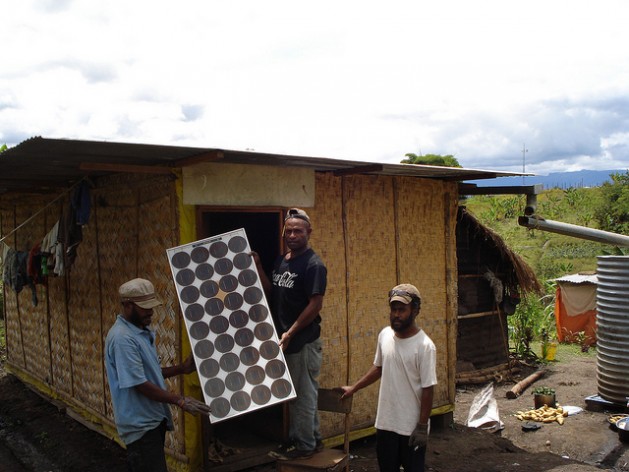 WASHINGTON DC, Apr 1 2016 (IPS) - On March 29, Papua New Guinea became the first country to formally submit the final version of its national climate action plan (called a “Nationally Determined Contribution,” or NDC) under the Paris Agreement. The small Pacific nation’s plan to transition to 100 percent renewable energy by 2030 is no longer just an “intended” nationally determined contribution (INDC) – it is now the country’s official climate plan.

Papua New Guinea’s NDC marks a step forward in the process of implementing the landmark international climate agreement adopted at COP21 in Paris last year. In the lead up to COP21, countries submitted INDCs, setting out what climate actions they proposed to take to contribute to the global community’s collective effect to limit global warming. To date, 161 INDCs have been submitted representing the national climate plans of 188 countries and covering 98.7 percent of global greenhouse gas emissions. The Paris Agreement provides a legal framework for these climate plans.

How Does an INDC become an NDC?

Under the Agreement, one of the essential next steps is for countries to finalize their national climate plans and formally submit them to the UN Framework Convention on Climate Change (UNFCCC) as NDCs, just as Papua New Guinea has done.

It is expected that for many countries, including Papua New Guinea, their NDCs will be the same as their INDCs. But countries could also increase the transparency and ambition of their climate plans before officially submitting them—a move that would get the world closer to preventing the worst impacts of climate change.

Once finalized by countries, these NDCs will be publicly available in the NDC Registry created by the UNFCCC Secretariat.

Why Are NDCs a Big Deal?

NDCs are at the core of the process established under the Paris Agreement to continually ramp up international climate action every five years. All countries are required to prepare, communicate and maintain successive NDCs, and pursue domestic mitigation measures to achieve their objectives. Countries will be required to regularly submit national emissions inventories and report on their progress. Every five years, collective progress towards achieving the long-term goals of the Paris Agreement will be assessed, and countries will submit their new NDCs representing greater action than their previous plans. In short, the NDCs underpin the world’s ability to achieve the goals of the Paris Agreement—including limiting temperature rise to 1.5-2 degrees C—and prevent the worst impacts of climate change.

NDCs are also important for communicating information on adaptation, as Papua New Guinea has done. Adaptation components outline goals, activities and needs for countries to cope with increased drought, stronger storms, sea level rise and other consequences of a warming planet.

The Paris Agreement recognizes the submission and regular updating of these adaptation communications, either through NDCs or other means.

Papua New Guinea’s leadership in taking this important next step towards implementing the Paris Agreement should be widely noted and applauded.

We can now to look forward to many other countries formalizing their national climate action plans and further building the momentum for a low-carbon, climate-resilient world.