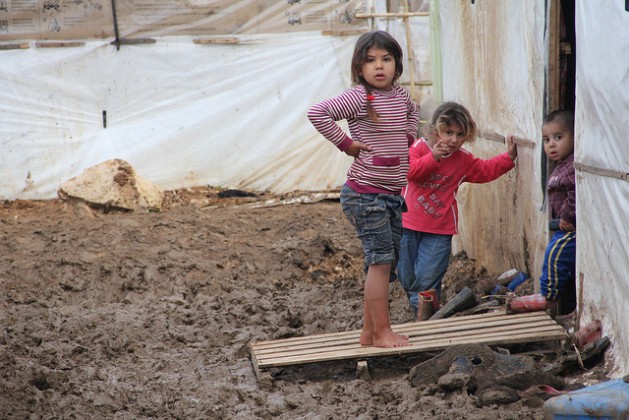 That’s what a group of Palestinian refugees who fled the war in Syria and found safety in Gaza told IPS last November.

Today, their sentiment continues to be echoed in Syria and in camps and urban centres hosting refugees across the region.

As the greatest refugee crisis since the Second World War gives no sign of relenting, the upcoming World Humanitarian Summit will offer a much needed space to discuss what a long-term solution for people fleeing protracted conflict might look like and how actors and stakeholders might go about achieving it.

Since the beginning of the Syrian conflict in 2011, the Middle East has slowly overtaken Sub-Saharan Africa to become the epicentre of this crisis and of the migratory movements of millions of people in search of a safe haven.

"We in America spend more money buying Coca-Cola than all the money going into Syria." -- Thomas Staal, Acting Assistant Administrator at USAID

The United Nations Refugee Agency (UNHCR) estimates that today some 60 million people are displaced worldwide, that is 1 person in every 122. What experts in the field agree upon, is that traditional responses to refugees’ needs are falling far short of the mark.

At a conference on this issue that was held last June at the Middle East Institute (MEI) in Washington DC, humanitarian and political actors agreed that it is no longer enough for the UN to set up a camp at the nearest border, send in the aid professionals and assume that rich countries will foot the bill.

“That model has been shattered in recent years,” wrote scholar Greg Myre. And new patterns are emerging that demand new approaches.

Protracted conflict; the ability and willingness of refugees to reach far away places; and lack of funding for the aid industry, have been widely identified as the new elements causing a need to re-think traditional humanitarian approaches that are failing.

If in the recent past economic opportunities played a major role in people’s movements, today by far the major pushing factor is war.

In the Middle East alone, in 2015 some 15 million people had been displaced by conflict. As of May 16, 2016, the numbers have continued to rise.

Close to five million people have escaped Syria alone, while 6.6 million are IDPs (Internally Displaced Persons). According to OCHA, the UN Office for the Coordination of Humanitarian Affairs, in Yemen, IDPs number 2.76 Million, while in Iraq it is 3.4 million.

These numbers, of course, add to the existing five million Palestinians registered with the UN Relief and Works Agency for Palestine Refugees in the Near East (UNRWA) since 1948 and 1967; to the Lebanese who had fled civil war in the 1980s; and to the Iraqi refugees who had fled the 1991 and 2003 wars. Many of them were living in Syria when the war broke out, making them refugees for a second or third time.

Refugees in the region compete for limited resources, place tremendous stress on the often wavering infrastructure recovering from prolonged conflict, and are perceived as a potential security threat by countries striving to maintain a precarious peace, such as Lebanon, Jordan and Turkey.

Willingness to travel to faraway countries

As the region’s capacity to absorb refugees is stretched, the ability and willingness of refugees to reach faraway corners of the world is another important new element that sets this crisis apart from previous ones.

Especially in the case of Syria, the length of the conflict and the vacuum left by the lack of political solution in the foreseeable future push refugees to take the risk of settling somewhere else for the long term.

Poor living conditions in camps and limited or no educational and economic opportunities in hosting urban centres in the region are decisive factors in the move.

The people with the means to undertake a trip to Europe, the USA or Australia are often professionals whose expertise will be necessary, but unavailable, once the rebuilding kicks off. Statistics show that the further a refugee travels, the more unlikely he or she is to return. UNHCR estimates that the average length of displacement has now reached 17 years.

Last, but certainly not least, this crisis is characterised by an endemic lack of funds that leaves the aid industry and UN agencies unable to provide for the basic needs of millions. As of May 2016, UNHCR is 3.5 billion dollars short on its 4.5 billion appeal for the Syria Regional Refugee Response alone.

It is often reported that it costs 10 times less to care for a refugee in the region of origin than it does in the West, and yet donor countries are slow to raise the necessary funds to improve the lives of millions escaping wars.

The funding crisis and the inability to successfully meet, let alone end, the needs of refugees has pushed the aid community to some soul searching that in the past decade has led to calls for reform, especially at the UN level, to streamline work, decrease overheads, coordinate more efficiently with local humanitarian organizations and seek alternative donors to governments.

On the subject of alternative funding sources, Thomas Staal, Acting Assistant Administrator at USAID, tellingly explained to the audience at the MEI conference last June that “we in America spend more money buying Coca-Cola than all the money going into Syria.”

Aside from highlighting that the private sector should play its part in times of crisis, the statement can be read as a comment of the need to reassess our priorities and values as a society.

The crisis is in the Middle East, not in the West

Despite clear statistics and readily available numbers on the Middle East refugee crisis, this emergency is still too often talked about in Western-centric terms and inevitably looked at as a ‘problem’, never an opportunity.

Deaths in the Mediterranean do not happen in a vacuum, they are the direct result of the shortcomings of the international community to meet the needs of refugees worldwide, to deflate conflicts and to create lasting opportunities for improvement.

The immense strain placed on the Turkish, Lebanese and Jordanian hosting populations, which have taken in 2.7, 1.05 and 0.70 million Syrians respectively, further highlights the West’s inability to add a sensible perspective to the small numbers of refugees reaching its shores.

As the healthcare and education systems of countries ravaged by war head down the path of de-development, it is imperative that lasting solutions are implemented before the situation spirals further into chaos, experts say.

The humanitarian summit could be the forum where the first steps on this road are taken.