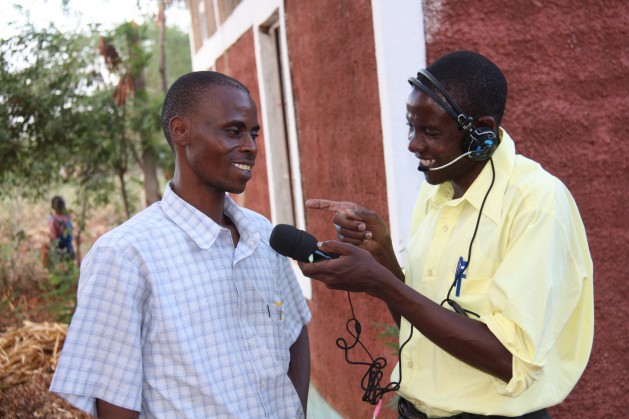 A journalist conducts an interview in Kenya. Credit: Isaiah Esipisu/IPS

HELSINKI, May 5 2016 (IPS) - The freedom of the press is a universally cherished democratic right, but what may have been overlooked as the World Day Freedom of Information was celebrated on Wednesday is that the ability of journalists to protect their source is increasingly coming under attack by authorities.

To Julie Posetti, there should be global standard adopted by all countries to protect the source of journalists, a fundamental principle to the capacity to do journalism that supports democracy.

“Journalists can draw on the universal right to freedom of expression and also right to privacy,” says Julie Posetti, editor at the Australia-based Fairfax Media, “what is lacking however, is that there is no international law that specifically enshrines the right to protect journalistic sources as part of this other international human rights framework,” Posetti told IPS.

Speaking at a UNESCO conference to mark the World Press Freedom Day in Helsinki, on Wednesday, Posetti said in some jurisdictions, for instance in Europe, there are regional laws and court judgments that uphold traditional rights to protect sources, but these protections are rather done in an “analogue way” – by which she means the laws need to be updated to take into account the digital reality of today’s world.

“The traditional rights of journalistic source might protect your right in court not to identify your source, or your notebook from proceedings, or to hand them over to the police, but not the digital information on one’s laptop or hard drive, all of which can reveal not just one source but many, many sources” -- Julie Posetti.

This year’s celebration marks the 250th anniversary of world’s first freedom of information act, due to campaign of Anders Chydenius, a member of parliament and priest, passed in modern day Sweden and Finland. Finland was part of Sweden until 1809, when it was handed over to Czarist Russia as a gift of war.

“The traditional rights of journalistic source might protect your right in court not to identify your source, or your notebook from proceedings, or to hand them over to the police, but not the digital information on one’s laptop or hard drive, all of which can reveal not just one source but many, many sources”, she said.

“It would be wonderful to have an international standard that declared that the protection of journalists sources was fundamental to the right of freedom expression”, she says, “instead what exists are piecemeal references to those right around the world, some very good laws, most are not up to date”.

The protection of a journalist’s source is an ethical principle in journalism recognised globally. People who often approach journalists with sensitive information usually do that at considerable risk, including the risk of losing their lives. Such people would wish to have their identity protected but if journalists cannot guarantee that, then it will have a chilling effect on the public right to information in general.

Some countries have legislation that provides protection to journalistic sources but such legislation is now being undermined by the use of data retention and national security and anti-terrorism policies globally.

According to findings for a book authored by Posetti and published by UNESCO last year, out of 121 countries surveyed for evidence of source protection legislation, 69 percent or 84 countries had inadequate legislation to protect journalistic sources – these laws were undermined by mass and targeted surveillance, anti-terrorism and national security policies and data retention policies.

Patrick Penninckx, Head of Information Society Department in the Council of Europe also expressed similar concerns over the violation of media freedoms in the 47-member Council of Europe, whose main objectives is upholding democracy, the rule of law and human rights.

Members of the Council of Europe include Russia and Azerbaijan but excludes Belorus. Some members are also members of the European Union.

“We are on the wrong path when it comes to freedom of the media”, Penninckx, told IPS. According to him, national legislations in 27 of the 47 members in the Council of Europe are going towards the wrong direction. These individual member countries seem to be saying, ‘why should we have any kind of European body dictate to us or oversee what we are doing if we can decide on that on by ourselves’, Pennickx, said

Therefore these countries are resorting to “legislative nationalism”, rather than accepting international best practice recommended by international institutions, even including the Council of Europe.

And this does not just apply to the “usual suspects”, he said, namely, Turkey, Russia and Azerbaijan, that are more often talked about in terms of suppressing press freedoms. Rather, it is a general tendency among member countries to use terrorism legislation, state of emergency and mass surveillance to diminish rights of individuals and through that put pressure on journalists and other media actors.

Europe is in the midst of multiple crisis – financial, refugee, migration – even some of these countries are in a conflict situation such as Ukraine, but in spite of that Pennickx insists that countries must still uphold human rights and press freedom in times of crisis.

In situations of targeted and mass surveillance there should be a higher threshold, for instance, the need to have a warrant in order to demand a journalist’s metadata. There must also be transparency and accountability in judicial measures, says Posetti.  In certain jurisdiction where judicial hearings take place in a closed court without the awareness of journalists, it is difficult for them to protect their sources.

While in favour of adopting an international standard to protect the sources of journalists, Guy Berger, Director of the Division of Freedom Expression and Media Development in UNESCO points out the difficulties faced by his organisation to bring that about.

UNESCO, being an intergovernmental organisation, he says, can only operate through diplomatic pressure. According to him, it would be considerably difficult to reach a consensus among 195 members of UNESCO to adopt a common legislation to provide journalistic sources. “In this era of concern over terrorism, governments have no appetite for a binding legislation.

“We try to influence with the power of reason and the NGOs and the media have the power of embarrassment; so you bring those together”, Berger told IPS.

“Freedom of information is not a Christmas tree, a gift to be used from time to time. It is an everyday gym exercise,” says Mabel Rehnfeldt, investigative journalist and Editor of ABC-Digital in Paraguay. To her, legislation per se, may not be enough to achieve the goal, rather it should followed advocacy and awareness raising for everyone, including journalists to fully grasp the significance of protecting journalistic sources.

“We need to be activists for the protection of our sources, because that principle is fundamental to our capacity to do journalism that supports democracy, without it we certainly are going to be unable to continue doing the kind of investigative journalism that has the capacity to effect change”, says Posetti.