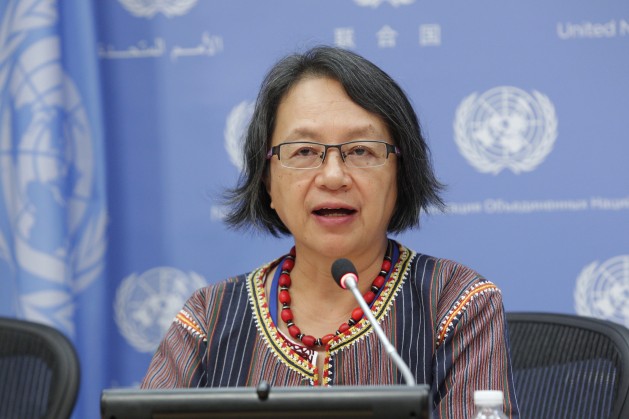 UN Special Rapporteur on the Rights of Indigenous People Victoria Tauli-Corpuz, an Igorot from the Cordillera region in the Philippines. UN Photo/JC McIlwaine

UNITED NATIONS, May 13 2016 (IPS) - The murder of Honduran Indigenous woman Berta Caceres is only too familiar to Victoria Tauli-Corpuz, the UN’s Special Rapporteur on the Rights of Indigenous Peoples.

All around the world, indigenous peoples are murdered, raped and kidnapped when their lands fall in the path of deforestation, mining and construction. According to the group Global Witness, one indigenous person was killed almost every week in 2015 because of their environmental activism, 40 percent of the total 116 people killed for environmental activism that year.

“We shouldn’t forget that the death of Berta is because of the protest that she had against the destruction of the territory of her people,” Tauli-Corpuz told IPS in a recent interview.

Caceres, who was murdered at the beginning of March, had long known her life was in danger. She experienced violence and intimidation as a leader of the Lenca people of Rio Blanco who protested the construction of the Agua Zarca dam on their traditional lands.

“A very crucial part of the problems that indigenous peoples face is that many of the things happening in their communities are happening because of the investments that are coming in from these richer countries." -- Victoria Tauli-Corpuz.

Caceres’ activism received international recognition, including through the prestigious 2015 Goldman Prize, however the was not enough to protect her.

“She knew she was going to die, she had even written her own obituary”, said Tauli-Corpuz who met with Caceres during a visit to Honduras in 2015.

Four men were arrested in relation to Caceres death earlier this week.

While Tauli-Corpuz welcomed the arrests she said that justice would not be clear until after the trial, and that real justice was about more than the criminal proceedings for Caceres’ murder.

“We cannot rest on our laurels to say the whole thing is finished because that’s not the point,” she said. “The point is this whole issue about the dam still being there.”

Tauli-Corpuz has witnessed accounts of violence against many other indigenous activists around the world, in her role as a rapporteur appointed by but independent from the United Nations.

Their experiences have startling similarity, too often indigenous peoples are subjected to rape, murder and kidnap, when they stand in the way of access to lands or natural resources.

“You cannot delink the fight of indigenous people for their lands, territories and resources from the violence that’s committed against indigenous women (and men), especially if this is a violence that is perpetrated by state authorities or by corporate security,” said Tauli-Corpuz.

Tauli-Corpuz also said that a look at the bigger picture reveals the increasingly international nature of the problems experienced by indigenous peoples worldwide.

“A very crucial part of the problems that indigenous peoples face is that many of the things happening in their communities are happening because of the investments that are coming in from these richer countries,” she said.

“You see a situation where the state is meant to be the main duty bearer for protecting the rights of indigenous peoples, but at the same time you see investors having strong rights being protected and that is really where a lot of conflicts come up,” she said.

In Guatemala, Tauli-Corpuz says that 50 indigenous women are still waiting for justice after their husbands were murdered and their lands taken in 1982.

“(Their) husbands were killed by the military because they were demanding the rights to their lands then (the military) took the women (to) the military camps and raped them and made them sexual slaves.”

Tauli-Corpuz also noted that for indigenous peoples justice is incomplete if their lands are protected but they are denied access to them.

“(The land) is the source of their identities, their cultures and their livelihoods,” she said. If the forest is preserved but people are kicked off their lands, “than that’s a another problem that has to be prevented at all costs.”

In other cases, indigenous peoples are forced off their lands when their food sources are destroyed.

For example said Tauli-Corpuz a major dam being built in the Amazon is not only destroying the forest but also means that there are no longer any fish in the rivers for the indigenous people who rely on them.

Tauli-Corpuz said that it is important to remember that indigenous peoples are contributing to climate change solutions by continuing their traditional ways of forest and ecosystem management.

Tauli-Corpuz has first-hand experience as an indigenous activist and environmental defender. As a leader of the Kankanaey Igorot people of the Cordillera Region in the Philippines she helped successfully protest the construction of the Chico River Hydroelectric dam in the 1970s.

She notes that these hydropower projects shouldn’t necessarily be seen as a climate change solution because they destroy forests and produce methane, which is more damaging to the atmosphere than carbon.