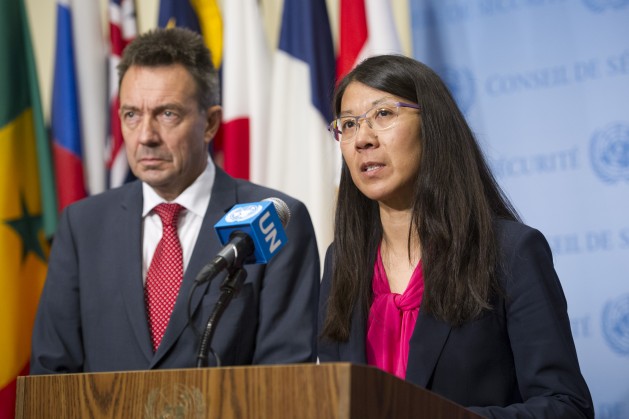 Dr. Joanne Liu, President of Medecins Sans Frontires, and Mr. Peter Maurer, President of the International Committee of the Red Cross, speak following the adoption by the Security Council of a resolution on healthcare in armed conflict. Credit: UN Photo/Rick Bajornas.

UNITED NATIONS, May 9 2016 (IPS) - Aid organisations have differing views about the upcoming World Humanitarian Summit, after Médecins Sans Frontières (MSF) pulled out last week some still hope the Summit will help bring about much needed change.

There is little doubt that the world’s humanitarian system is over-burdened as a result of the worst humanitarian crisis since World War II.

The ongoing crisis prompted UN Secretary-General Ban Ki-moon to convene the first-ever World Humanitarian Summit (WHS), which will take place in Istanbul on May 23-24.

MSF, which was significantly involved in preparations for the summit, announced last week that they “no longer have any hope” that the meeting will improve emergency response and reinforce the role of impartial humanitarian aid.

“Right now what you’re seeing is people using emergency funding for decades of aid which isn’t the right way to go about it." -- Christina Bennett, ODI.

The summit’s focus on doing “aid differently” and “end(ing) need” threaten to “dissolve humanitarian assistance into wider development, peace-building and political agendas,” the organisation said in a statement.

MSF also stated that the WHS has become a “fig-leaf of good intentions” which does not make states accountable or responsible.

“By putting states on the same level as nongovernmental organisations and UN agencies, which have no such powers or obligations, the Summit will minimize the responsibility of states,” MSF said.

UN Secretary-General Spokesperson Stephane Dujarric expressed his disappointment in the move, noting that MSF is a “strong and influential voice” in the field.

MSF’s decision to withdraw announced last Thursday has contributed to an ongoing international debate over what is required to create “better aid.”

Care International’s Senior Humanitarian Policy and Advocacy Coordinator Gareth Price-Jones told IPS the WHS needs to ensure faster and more “principled” aid that is still based on the humanitarian doctrine of impartiality and neutrality.

Where Care International differs from MSF is the importance of addressing why there are such needs in the first place, he said.

“[MSF] feels that humanitarian aid should be strictly reactive…although having that reactive response is critical, what we also need is to address the demand side,” said Price-Jones.

He noted that a nexus between humanitarian and development aid would help to implement much needed measures for prevention and mitigation especially in cases of conflict, natural disasters and climate change.

“When the fire service was set up, the logic was to charge in and protect fires,” he said. “But if you look at what modern fire services do nowadays is mostly fire prevention because everyone knows it is obviously far better to prevent a fire than to put it out after it has happened.”

However focusing on prevention does not necessarily mean that humanitarian aid will become politicized, he added.

Similarly, Senior Research Fellow of the Overseas Development Institute’s (ODI) Humanitarian Policy Group  wrote in a report that the collaboration of humanitarian and development actors can contribute to making communities more resilient to future crises.

“Right now what you’re seeing is people using emergency funding for decades of aid which isn’t the right way to go about it,” she said.

Though Bennett acknowledges the important role of neutral and independent humanitarian assistance and stressed the need for caution, she said aid should not operate in such separate “silos” in some cases.

“Just call it need and combine forces to understand how we can address that need,” she told IPS. With a “larger pot of funding,” actors can address both short and long-term needs, she added.

She cited the refugee crisis in the Middle East as a case that requires a more long-term, comprehensive aid approach.

“The problem is not going to go away…its not that they are going to leave their home for nine months and then go back and rebuild their house and live there again, that’s not really what happens anymore,” she stated.

According to the UN Office for the Coordination of Humanitarian Affairs (OCHA), the average length of displacement is now 17 years. Already, refugee-hosting countries such as Jordan have found their economic resources exhausted.

Norwegian Refugee Council’s (NRC) Country Director for Jordan Petr Kostohryz told IPS that the focus on immediate needs in the refugee crisis’ early stages created a degree of “aid dependency” instead of contributing to long-term solutions. This is partly due to the nature of humanitarian assistance, he added.

According to a UN and World Bank study, 90 percent of Syrian refugees in Jordan and Lebanon live under the national poverty line. Many families are unable to legally earn income and many children still lack access to education.

“We are at risk (of) losing a whole generation of Syrian refugee children,” he said.

Approximately 40 percent of all Syrian children in Jordan are out of school.

Bennett echoed similar sentiments to IPS, stating that a long-term view that combines short-term and long-term assistance is necessary to help provide education resources, create jobs, and give refugee families a more permanent living situation where “they feel they can actually start a life.”

When asked if he believes that the WHS will result in such tangible outcomes, Kostohryz told IPS that “we have no choice.”

“Although we may live in a time where agreeing on a common outcome or vision is the most difficult in decades, we need changes and new strategies that all key actors gather around and support,” he continued.

Kostohryz said that the solutions are ultimately political and that he hopes the WHS will lead to a confirmed commitment to the protection of civilians including education for all and a reaffirmation of principled humanitarian action.

Price-Jones also expressed similar optimistic hopes for the WHS, underscoring the need for states to make and strengthen such commitments to minimize humanitarian consequences.

“There are no humanitarian solutions to humanitarian problems. They are an outcome of a political failure either to plan for a natural disaster or to prevent and mitigate a conflict,” he told IPS.

Humanitarian reform is therefore in the hands of the world’s governments, a view that MSF shares.

Bennett added that along with governments, institutions such as the UN and large international non-governmental organisations (INGOs) must also address systemic issues in order to improve the humanitarian system including aid delivery and its outcomes.

More skeptical about the potential success of WHS, Bennett hopes that the meeting will at least provide a roadmap to “start” this conversation.

The WHS will bring together approximately 6,000 representatives from governments, businesses, aid organisations and affected communities. This includes 80 member states of the UN’s 193 members.

With the diversity in perspectives of what “humanitarian” means and should look like, it is still unclear what outcomes or actions the summit intends to produce, observers note.