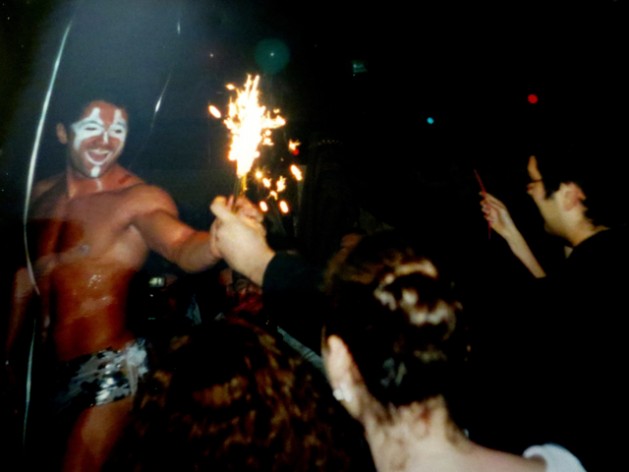 From violence in refugee camps to the rise of Islamophobia, the gay Syrian community faces a multitude of challenges. Credit: IPS

ROME, Jul 15 2016 (IPS) - Omar’s striking blue eyes and well-built physique are accentuated by his fashionable, tight-fitting apparel. At first glance, one would regard him as a carefree young man, blessed with the gifts of intellect and beauty. However, appearances can be deceptive. The traumas of war, displacement and isolation hang over Omar like an ominous shadow.

In 2013, triggered by the death of his best friend in the midst of bloody conflict, Omar fled Syria eventually landing in Germany. Desperately in search of a safe haven, he paid over 15 000 euro for a false Nordic passport which was later seized at the Hannover airport in Germany on his arrival. As one of the thousands of refugees, predominantly from Syria and Iraq, to flood into Germany in the past few years, Omar’s journey as a displaced youth has been far from easy.

According to the United Nations High Commissioner for Refugees (UNHCR) refugees as young as Omar are “Persons of Concern” and for the most part, their strife remains undocumented and underrepresented. In this case, the plight of a young displaced person was especially challenging for Omar who identifies himself as part of the gay community.

Although Omar arrived in Germany over three years ago, he claims every day of his life is spent reliving the bloodshed and warfare he bore witness to in Syria. “Every time I see a plane pass by, a jolt of pure fear passes through my body”. A lot of his anxiety is also rooted in his time spent at a refugee camp when he first arrived.

He described his feelings of social exclusion and frustration. “In the camp, I felt as if I had been captured and caged like a defeated lion. I remember trying to jump over the wall to get out…they locked up all the doors at 9 pm every night”.

The need to put on a “straight mask” to conceal his sexual orientation also acted as a form of incarceration for him. “I was less than a person, denied the right to express my true identity among my own people”. Men who openly identified themselves as gay in the camp or who were considered to be “feminine” by the other refugees were subjected to violence, torment, and humiliation.

Omar expressed happiness over the fact that in recent months many camps have been established solely concentrated on providing refuge to those who identify themselves as LGBT. He does not wish the grief gay refugees experienced in his camp on anyone.

The transition from his camp to government-funded accommodation in Berlin forced Omar to overcome many hurdles. The reality of his situation turned out to be a far cry from the “European dream” he had fantasized about in Syria. Then free to lead his own life, he quickly gave into vices and fell into the precarious world of drugs.

“During my first year, in order to send money home to my family, I began to sell drugs. I was one of many Syrians pushed into this underground business. Feelings of depression and desperation make young men like me fall into this trap”.

Omar explained that the “white” market could never give him enough to lead a sustainable life whilst funding his sister’s university education and maintaining the upkeep of his parents. Once well-to-do and affluent, his family had lost their prosperous business during the war in Syria.

“No one could ever understand how hard life is here for Syrians like me, my main priority is getting my sisters through education. At this point, I can only think of them, my family has been left with nothing.”

According to a study issued by the UNHCR on displaced youth, the majority of young refugees are obliged to take on the role of breadwinner for their families. They are seen as “the backbone of the community” left at home. This, in turn, has pushed displaced men like Omar to become involved in illegal trade and crime to provide for the bare necessities of their loved ones.

Unable to cope with the risks he exposed himself to, Omar abandoned the drug trade and went on to work in the local sex industry as a male escort. Although his family would have never accepted this choice, he emphasised the fact that “in times like these, you cannot think about love or respect.”

Ashamed about what he considered a “seedy” occupation, he began to tell friends and family that he was taking on modelling work to get by. Omar stated that within the gay community, the majority of Syrian refugees opt for the easy money that comes with the sex trade.

Omar explained that even finding love can be difficult due to the recent rise of Islamophobia across Germany. On Grindr, a popular dating app used by the gay community, Omar and many of his friends have experienced discrimination and verbal abuse from other men using the service.

Omar receives messages such as “Go back home, we don’t want ISIS in our country” and “You’re a Muslim terrorist” on a daily basis. Whereas he once felt the need to hide his sexuality, he now feels it is more important to conceal his religion and nationality.

“When I first arrived, the German people were accommodating and kind-hearted, now they are taking to the streets in protest. They want us out, they believe we are all extremists.”

Now, Omar has left the dark underworld of sex and drugs that he feels in many ways dehumanized him. He’s hopeful for the future as he is now fluent in German and is working towards his goal of becoming a personal trainer.

When asked if he thought the conflict in Syria would end anytime soon he replied “A peaceful Syria is not possible in the near future. It’s in the same situation as Iraq. Religious intolerance leads to conflict, even though it’s a secular state. No one forgives and forgets, it’s a vicious circle.”

In spite of this, Omar still dreams about the day he can return to his homeland. “If the war stopped, I would go back to Syria in a heartbeat. However, speaking for the majority of the gay Syrian community, they are in no hurry to go back to a society that never accepted them in the first place”.

In this sense, although Europe has presented young gay refugees like Omar with a multitude of challenges, it has also provided them with refuge, stability and the first chance to be themselves and embrace their sexuality.