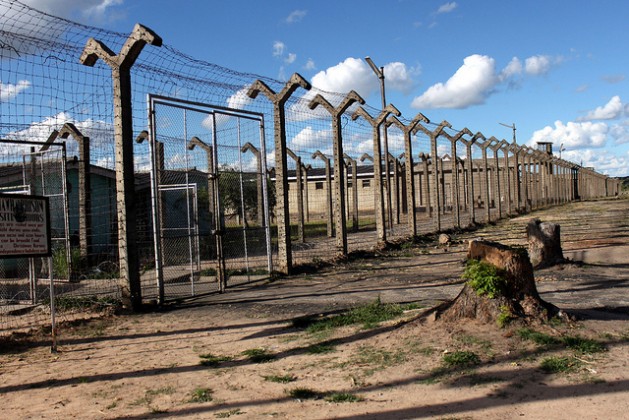 At least 160 youths under the age of 18 currently await execuion in Iran. Credit: IPS

ROME, Aug 12 2016 (IPS) - As Iran currently executes the highest number of juvenile offenders in the world, hundreds of Iranian minors helplessly watch their childhoods pass them by as they await their fatal ends behind bars.

Shockingly, rights groups have reported that Iran has executed at least 230 people since the beginning of 2016.

Whilst the majority of countries worldwide are fighting for the eradication of capital punishment against adults, Iran continues to sentence girls as young as 9 and boys aged 15 to death.

According to a recent report issued by Amnesty International, at least 160 young Iranians currently await execution.

Whilst Iran is a major perpetrator in this human rights violation against minors, a host of countries including Pakistan, Saudi Arabia, and Yemen uphold Iran’s belief that the death penalty is an acceptable form of punishment for “devious” minors.

The death penalty for minors in Iran is invoked by what are considered to be “Hodud crimes”. “Hodud” refers to offenses which have fixed definitions and punishments under Islamic law.

For example, those engaged in the practices of alcohol consumption, adultery, and same-sex fornication will, in most cases, face the grave consequence of death.

Iran’s brutal stance on the death penalty was brought to the fore this August as Human Rights Watch reported on the mass execution of 20 felons in Iran’s Rajai Shahr prison on August 2nd.

Whilst a score of “criminals” were put to death this month , Alireza Tajiki , managed to narrowly escape his final execution date of August 3rd.

Alireza, now 19, was sentenced to death at the tender age of 15, following a trial that did not meet international standards of justice by any means.

Thankfully, the young Iranian evaded execution due to the support of a lawyer. However, the postponement is only temporary.

Alireza, who has been convicted of rape and murder, is one of the hundreds of young Iranians to be sent to the gallows for what Iran considers to be “the most serious” of crimes.

Hassan Afshar, arrested at 17 and convicted of “forced male to male intercourse” did not share the same luck as Alireza.

On July 18, Amnesty International reported the hanging of Hassan by Iranian authorities. He had no access to a lawyer.

Drug-related crimes are also amongst the host of “atrocities” to be deemed punishable by death.

Janat Mir, a young Afghani residing in Iran was arrested for drug offenses after his friend’s house was raided by local police.

Similar to the vast majority of young people in his grave situation, he could not avail of legal protection or consular services.

Unfortunately, many convicted youths in Iran find themselves trapped in similarly hopeless situations to those described above.

The most alarming issue is that Iranian minors are, for the most part, blindly unaware of their rights to a fair trial.

Although a progressive path was paved when the Iran Supreme Court announced that youths sentenced to death could apply for a retrial, this reform did not leave the impact it should have.

While the official policy has been amended and undertaken, an underlying problem persists; the vast majority of incarcerated children are kept in the dark on their right to a retrial.

Even though a revised Islamic Penal Code was introduced in 2013 wherein children who “did not comprehend the nature of their crime” or who lacked “mental growth and maturity” during the criminal act could be given an alternative punishment to the death penalty, the code does not meet Iran’s international obligations.

No judge or courts, under any circumstances, should have the authority to sentence juvenile offenders to death.

In this way, Iran has consistently failed to abide by the United Nations Convention on the Rights of the Child, by neither protecting nor informing minors of their rights and also refusing to put an end to the death penalty for minors.

In April 2014, the Head of the Judiciary, Ayatollah Sadeq Amoli Larijani, stated: “In the Islamic Republic of Iran, we have no execution of people under the age of 18.”

In this sense, it remains evident that the Iranian judicial system demonstrates a blatant disregard of its human rights obligations to children.

James Lynch, Deputy Middle East and North Africa Director at Amnesty International, emphasised his belief that “Iran’s bloodstained record of sending juvenile offenders to the gallows, routinely after grossly unfair trials, makes an absolute mockery of juvenile justice and shamelessly betrays the commitments Iran has made to children’s rights.”

In many ways, the amendment of the 2013 Islamic Penal Code is the fundamental key to achieving child development and juvenile justice in the Islamic Republic of Iran.

The Penal code must be altered in order to explicitly prohibit the use of the death penalty for all crimes committed by people under 18 years of age, increase the minimum age of criminal responsibility for girls to that for boys, which is currently set at 15, and ensure that no individual under 18 years of age is held culpable as an adult, in line with Article 1 of the Convention on the Rights of the Child.

Now, it is time for the world to call for a reform of the Islamic Penal Code.

The justice, freedom, and fundamental human rights Iran’s children behind bars have been so mercilessly denied of must be put to an almighty halt.