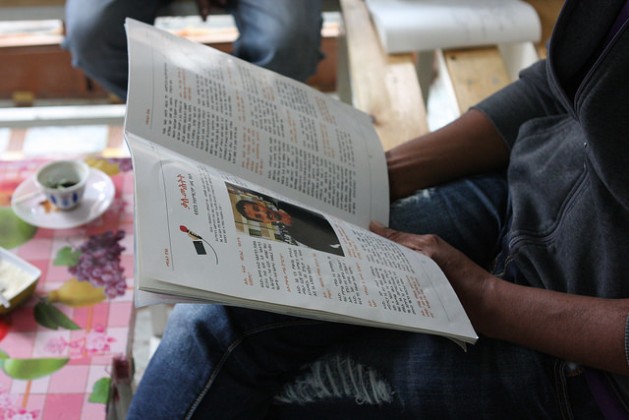 Eritrean journalist Estifo displaying Tsilal, the magazine he edits, which deals with the risks of migration and difficult reality of being in Europe. Credit: James Jeffrey/IPS

ADDIS ABABA, Oct 6 2016 (IPS) - It took Eritrean journalist Estifo* seven years to save up enough money to pay a fixer to get him and his family from the capital, Asmara, to the shared border with Ethiopia. After they crossed the border by foot, they turned themselves in to the Ethiopian authorities and claimed asylum as refugees.

Now Estifo is one of thousands of Eritreans living in Addis Ababa, where he edits a magazine that aims to dissuade other Eritreans in the Ethiopian capital and dotted around the country in refugee camps from attempting to make the risky journey north through Libya and across the Mediterranean toward Europe.

“You had no rights as a journalist and it was risky even if you were working for the State TV. If you did something they didn’t like, they would call the police.” -- Beyene, an Eritrean journalist

“The magazine deals with the risks of migration and difficult reality of being in Europe,” says Estifo, the magazine’s editor. “Also once you are in Europe you can’t come back—things change too much. Whereas in Addis there’s more in common, and it’s easier to one day go back to Eritrea.”

Ever since Ethiopia’s late long-term ruler Meles Zenawi established an open-door policy toward refugees, the country’s refugee population has grown to about 700,000, the largest in Africa.

And that open door policy even extends to accepting refugees from a country viewed by Ethiopia as its arch nemesis since a catastrophic two-year war between the two that ended in 2000 but left matters unresolved and mutual antipathy only stronger.

It’s hardly surprising that among those going south over the shared border are journalists. A list compiled in 2015 by the Committee to Protect Journalists of the 10 countries where the press is most restricted ranks Eritrea as the most censored country in the world and Africa’s worst jailer of journalists.

The crackdown on media in Eritrea began in earnest in 2001, reportedly taking advantage of when the world was distracted by the aftermath of the 9/11 attacks.

“In September they shut down private news channels and most of my colleagues were arrested,” says Estifo, who as a sports writer avoided arrest (a friend had previously advised him to take the position to avoid undue attention).

Still fearing for his safety, however, he joined the military media operating at Sawa, the desert base where Eritrean Defence Forces recruits and national service conscripts are sent for basic military training.

Living conditions were bad, Estifo says, and he was paid only 600 Eritrean nakfa (38 dollars) a month, leaving little after his 500 nakfa rent.

Then in 2007 he managed to get paternity leave with his wife pregnant, and afterwards rather than him returning to Sawa, they went into hiding. For two years Estifo never left his home, he says.

Once he deemed it safe enough, he started to venture out and began selling shoes with the help of his wife, slowly saving money for the escape to the border. Eventually it was time.

“We didn’t sell any of our possessions before we left in case people got suspicious,” he says. “We reached the border around 2 a.m. but we waited until dawn to cross otherwise we might have been shot by patrols.” 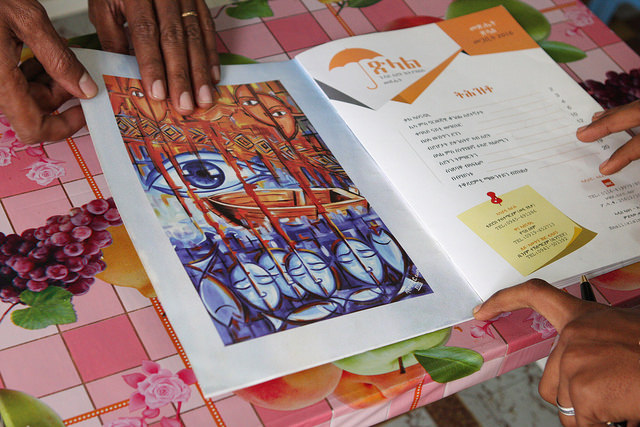 Eritrean journalists Estifo and Beyene discussing the contents of their magazine Tsilal, the Tigrayan word for umbrella. Credit: James Jeffrey/IPS

Beyene is another refugee journalist working with Estifo on the magazine who recalls the arrest of 40 journalists in 2009, accused of leaking news about Eritrea to foreign media.

“You had no rights as a journalist and it was risky even if you were working for the State TV,” Beyene says. “If you did something they didn’t like, they would call the police.”

Arrests sometimes happened as journalists were relaxing in the communal tea room.

“They wanted you to see it so you became afraid,” Estifo says.

Repression of media and its means is all-consuming in Eritrean society. Fearing the spread of an Arab Spring-type uprising, Eritrea scrapped plans in 2011 to provide mobile Internet for its citizens, making it even harder to access independent information.

“For the young there’s no chance to do your own thing, you can’t do anything for your family, everything pushes you to leave,” says Yonathon, 31, who left Eritrea in 2011 and spent a year in an Ethiopia-based refugee camp before relocation to Addis Ababa. “No one can stand for justice there—before you start they will capture you; such efforts are good for nothing.”

Eritrea’s authoritarian government employs a vast spying and detention network. Yonathon, while clearly not sympathetic to those involved, appreciates the realities: “It’s a matter of survival, to feed their families—the situation forces them to spy.”

Yonathon and 29-year-old Teklu sitting next to him have Eritrean friends who attempted the Mediterranean crossing from Libya. Fortunately, no one they know died. But thousands have.

And a 20-year-old niece of Yonathon died in Libya waiting to make the crossing; he doesn’t know the cause. Teklu has relatives who were kidnapped during their northward overland travels and released after ransoms were paid.

“Of course it has come to my mind,” Yonathon says of trying to make the crossing. “I’ve been here four years: what is my future going to be if I stay here?”

Such frustrations are addressed in the magazine, called Tsilal, the Tigrayan word for umbrella, and chosen because refugees are under the umbrella of another country’s protection, Estifo says.

Its production is funded by the Norwegian Refugee Council, and it comes out once every two months with a circulation of about 3,000 free copies, of which about 600 go to refugee camps. Each of the seven journalists working on the magazine is paid 750 birr (31 dollars) per month.

“The money’s not enough but we have to do it or we won’t be heard,” Estifo says, adding it’s important to illustrate how the reality of living in Europe is often a far cry from the more glamourous version seen on social media by young Eritreans.

The magazine also features more encouraging articles about Eritrean artists and entrepreneurial activities, while it avoids contentious issues such as politics and religion so as not to put itself and the Norwegian Refugee Council in an awkward position. Ethiopia also has its own struggles with press freedom—the same CJR survey of restricted press placed Ethiopia at number four.

“Currently we just cover soft issues but we want to go beyond to those issues we feel are more important,” Estifo says. “But we’re restrained by our funding. If we got other funding we could write independently about more topics.”

Another problem is not having enough resources to enable reporters to visit camps and talk to Eritreans there. The three largest camps—May Aini, Adi Harush and Hitsats refugee camps—are all the way in the northwest of Ethiopia’s Tigray region, close to the borders with Eritrea and Sudan, hundreds of kilometers away from Addis Ababa.

And the magazine has no office, rather it is put together on laptops in cafes with notably Italian-sounding names that have been opened by Eritreans—Eritrea used to be an Italian colony.

“Sometimes I spend the whole day in a café working on the laptop, drinking tea and eating some shiro at lunch,” Yonathon says.

But despite the Tigrayan voices amid cafes with Italian names, Addis Ababa can never replace being back in Eritrea.

Hence the importance of never forgetting about Eritrea’s ongoing troubles and those left behind. Estifo harbours ambitions of one day starting a radio station that could be picked up by those in Eritrea.

“Getting out of Eritrea is one way of demonstrating against the government,” Estifo says. “But while in places like Ethiopia, Eritreans must ask themselves how they can bring about freedom with our own resources.”

*Only first names are used in this article due to the sensitive nature of the subject matter.