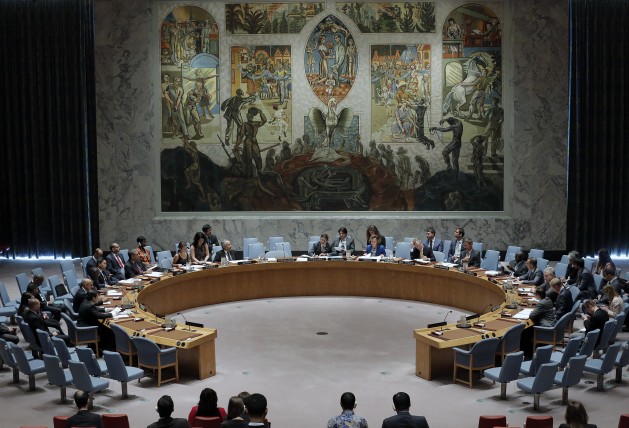 The nine include four rotating members — Spain, Ukraine, Italy and the Netherlands — from Europe, as well as the council’s five permanent members — China, France, Russia, the United Kingdom and the United States.

According to 2015 data from the Stockholm International Peace Research Institute (SIPRI), these nine countries make up the world’s top ten exporters of arms. Germany ranked at number 5, is the only top 10 exporter which is not a recent, current or prospective member of the 15-member council.

However, Pieter Wezeman, Senior Researcher in the Arms and Military Expenditure Programme at SIPRI told IPS that he was not “surprised at all” to see so many arms exporters on the council.

“In reality it is business as usual: the five permanent members of the Security Council are of course in many ways the strongest military powers,” said Wezeman.

Just two permanent members, the United States with 33 percent and Russia with 25 percent, accounted for 58 percent of total global arms exports in 2015, according to SIPRI data. China and France take up third and fourth place with much smaller shares of 5.9 percent and 5.6 percent respectively. 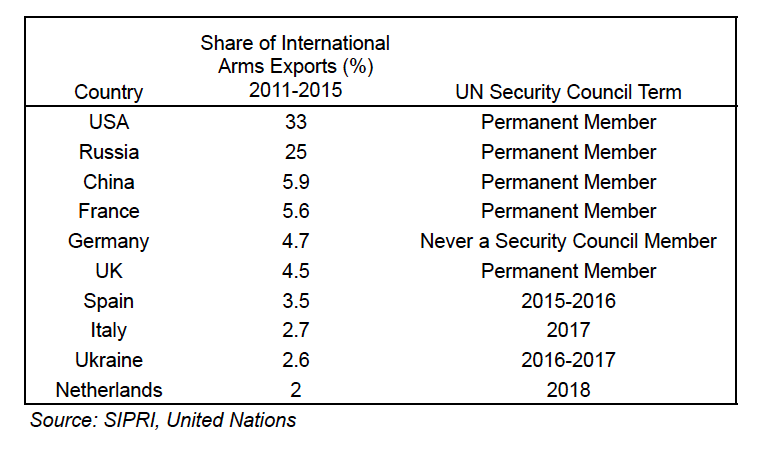 The status of several rotating Security Council members as arms exporters while “interesting”, may be mostly “coincidence,” added Wezeman.

Current conflicts in Yemen and Syria pose contrasting examples of the relative influence that Security Council members have as arms exporters.

“Some of the major crises that the Security Council is now grappling with, particularly Yemen for example, have in large part been brought about the actions of its own members in selling arms to conflict parties,” Anna Macdonald, Director of Control Arms told IPS.

Macdonald says that the transfer of arms to Saudi Arabia for use in Yemen violates both humanitarian law and the Arms Trade Treaty.

“Some of the major crises that the Security Council is now grappling with, particularly Yemen for example, have in large part been brought about the actions of its own members in selling arms to conflict parties,” Anna Macdonald.

Domestic pressure from civil society organisations, however, have caused some European countries, including Sweden which will join the Security Council in January 2017, to restrict arms sales to Saudi Arabia, said Wezeman. Sweden, which will hold a seat on the council from January 2017 to December 2018, comes in as the world’s number 12 arms exporter.

However arms exports from Security Council members are not necessarily a significant source of weapons in conflicts under consideration by the council.

For example, council members have been hinting at the prospect of an arms embargo against South Sudan for much of 2016, however the weapons used in South Sudan are not closely related to exports from Security Council members.

“South Sudan is a country which acquires primarily cheap, simple weapons. It doesn’t need the latest model tank, it can do with a tank which is 30 or 40 years old,” said Wezeman.

According to Wezeman, it is more likely that political rather than economic considerations impact Security Council members’ decisions regarding arms embargoes, since profits from arms sales are “limited compared to their total economy.”

“Most of the states that are under a UN arms embargo are generally poor countries where the markets for anything, including arms, are not particularly big,” he added.

Overall, however Macdonald says that Security Council members have special responsibilities in the maintenance of international peace and security, and this extends also to their particular responsibilities as arms exporters.

“We would obviously cite the UN Article 5: promote maintenance of peace with the least diversion for armament,” she said.

“We would argue that the 1.3 trillion that’s currently allocated to military expenditure is not in keeping with the spirit or letter of the UN charter,” she added, noting that this is significantly more than it would cost to eradicate extreme poverty.