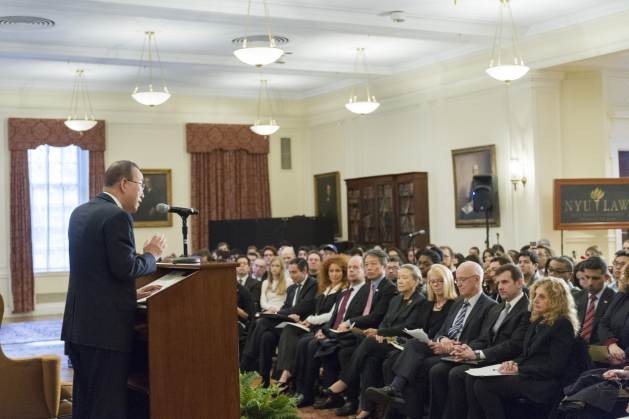 Secretary-General Ban Ki-moon delivers a keynote address on “The Future of Multilateral Disarmament” at an event hosted by the Centre for Global Affairs (CGA) of New York University (NYU). Credit: UN Photo/Rick Bajornas

UNITED NATIONS, Dec 22 2016 (IPS) - As he packs his bags to head home to South Korea, the outgoing UN Secretary-General Ban Ki-moon has been sharply critical of the decision-making process in the world body – specifically the veto powers in the Security Council and the increasing “consensus” rule in voting – where a single country can defy the rest of the 192 members, particularly on politically and financially sensitive issues.

Pointing out that member states had failed to agree on a formula for reforming the Security Council, he said he had initiated a major reform proposal to improve fairness and effectiveness in the United Nations.

But these proposals have been blocked in the name of “consensus”, sometimes by a single country, he told delegates in his farewell address during the opening session of the General Assembly in September.

Ban, who steps down on December 31 after a 10-year long tenure, regretted that “essential action and good ideas had been blocked” not only in the Security Council but also in the General Assembly and in the budget process (in the Administrative and Budgetary Committee) and elsewhere.

Is it fair, he asked, “for any one country to wield such disproportionate power and hold the world hostage over so many important issues?”

But he refused to identify any countries by name, although he has singled out Russia and China for using their veto powers to block resolutions on Syria.

Is it fair, asked UN Secretary-General Ban Ki-moon, “for any one country to wield such disproportionate power and hold the world hostage over so many important issues?”
“Consensus should not be confused with unanimity,” he said, urging the General Assembly President to explore the creation of a high-level panel to search for solutions.

Ambassador Anwarul Chowdhury, a former Under-Secretary-General and High Representative of the UN, told IPS: “I can empathize with the frustrations of S-G Ban as he leaves office later this month.”

But the convoluted process of decision-making has been a matter of major concern for a long time at the UN, he added.

“It does not take two terms for an S-G to comprehend that—and that too in the last months (of his second five year term). Also, he should have mentioned how the Secretary-General of the UN is chosen by a few every five years”.

“I have found that when it suits its purpose the leadership of the UN Secretariat does not have any qualms about the convoluted decision-making process.”

The Secretariat leadership should have taken up the issue long ago and repeatedly directly with the countries concerned on both sides.

The tyranny and irrationality of the majority has been a point of contention as the contentious decisions were taken by majority votes marginalizing the “big players”, he argued.

“The tyranny and unilateralism of a few big financial contributors to UN in the consensus process is also a major concern”, declared Chowdhury, a former Chairman of the UN’s Administrative and Budgetary Committee in 1997-1998 which approved (former Secretary-General) Kofi Annan’s first reform budget.

Meanwhile, there has been longstanding speculation that the consensus rule was introduced in the 1970s when Western powers realized they were being outvoted by developing nations—even as the Group of 77 developing nations increased its membership to 132, ranking as the largest single coalition in the world body.

The United Nations was founded largely on the principle of one-country, one-vote – and where majority rules.

In his address to the Centre for Global Affairs at New York University (NYU) last month,  the outgoing Secretary-General also lambasted the Geneva-based Conference on Disarmament (CD) for its inability to adopt a programme of work or even an agenda for nearly two decades.

“Twenty years this has existed, and I have been warning them:  If you behave this way, we will have to bring the discussions in the Conference on Disarmament to some other venue, but they don’t listen… because of the consensus system, just one country can block the whole 193 Member States.  This is a totally unacceptable situation,” he declared.

Ambassador Hardeep Singh Puri, former Permanent Representative of India to the United Nations, told IPS the two comments attributed to the SG understandably represent and reflect an element of anguished introspection by the outgoing SG on the vexed and stalemated decision-making processes of, and in, the UN.

“With the exception of the Security Council, which has a peculiar and sui generis negotiating history, other instruments are invariably based on the one country one vote formula,” said Puri, whose recently- released book titled “Perilous Interventions” focuses on the flawed role of the Security Council in crisis situations such as Libya and Syria.

In the case of the Security Council, he pointed out, delegations in San Francisco in 1945 were confronted with a ‘take it or leave it ‘choice.

Since the major preoccupation of delegations was to prevent the scourge of another World War, they chose to accept, perhaps for valid reasons, a system based on vetoes by the five Permanent Members, he noted.

“This system worked for several years but fell apart after Resolution 1973, in the case of Libya, was misused to effect regime change, which was not part of the negotiating history of the resolution and was, in fact, specifically sought to be precluded”, he argued.

Having armed themselves with authority for the ‘use of force’, three of the five Permanent Members proceeded to disregard the other provisions of the Resolution, said Puri.

“The mess in Libya and the unfolding tragedy in Syria,” he said, required Council unanimity for vetoes not to be employed where mass atrocities were likely. This was not to be the case. Syria constitutes the severest indictment of the Council’s ineffectiveness in mass atrocity prevention, after Rwanda and Sberenica in 1994 and 1995.

The functioning of the Security Council represents a naked display of power politics. The rest of the UN system has not been immune from this either, he added.

Puri said the consensus rule was never intended to be anything more than an attempt to take everyone along. It degenerated into a requirement of unanimity.

The weak invariably acquiesced to the wishes of the powerful States and went along with outcomes in the interests of consensus. The strong and dominant States invoked consensus when they feared being outvoted by the arithmetic of numbers, Puri declared.

Stephen Zunes, Professor of Politics and International Studies at the University of San Francisco who has written extensively on the politics of the Security Council, told IPS the Secretary General is certainly correct in his criticism and Russia and China for abusing their veto power to prevent effective action by the United Nations in trying to end the ongoing slaughter in Syria.

“However, it is important to remember that the United States has similarly abused its veto power (and threats thereof) to prevent effective UN action regarding Israel /Palestine, as has France in regard to Morocco’s occupation of Western Sahara.”

Indeed, on a strictly legal basis, he pointed out, the case for UN action is even stronger in the latter cases, since they involve territories under foreign belligerent occupation, whereas the Syrian civil war—as tragic as it may be on a humanitarian level—is primarily an internal conflict, said Zunes, author of the highly-acclaimed “Tinderbox: US Middle East Policy and the Roots of Terrorism”.

Chowdhury told IPS a balanced decision-making process should be discussed and agreed upon in the best interest of the United Nations.

This needs the immediate attention and pro-active leadership of incoming S-G Antonio Guterres, as he takes over the helms of UN in January.

One wonders: “Would be have the moral courage to do that because he, like his recent predecessors, is the beneficiary of the unilateral decision-making by the few?”

In his NYU address, Ban was talking about the decision-making in the Conference on Disarmament. That is altogether a different scenario compared to how the decisions are made by the UN GA (General Assembly). His GA statement has more relevance in the context of the reform of decision-making.

But to ask for “a high level panel to search for solutions” is naïve and an attempt to clean up his desk before departure.

“The new S-G should take the “bull,” as they say, by the horns and thereby prove that his choice as the new UN boss was a worthwhile decision,” said Chowdhury, Initiator of Security Council resolution 1325 underscoring women’s equality of participation and former Permanent Representative of Bangladesh to UN (1996-2001).

Puri told IPS each agency or instrument has a different context and history.

In the World Trade Organization (WTO) and the erstwhile General Agreement on Tariffs and Trade (GATT), whenever the dominant players feared losing the numerical vote, they would go outside the system and negotiate plurilateral arrangements, constituting “a coalition of the willing.”

In the Fifth Committee and the Advisory Committee on Administrative and Budgetary Questions (ACABQ), the lament of the outgoing SG must be seen in terms of the reluctance of developing countries willing to countenance priorities, which in their views often reflected the views of the developed countries.

The Conference on Disarmament is an altogether different story. The stalemate on major negotiating processes is anchored in serious policy differences. The fact that it continues to exist without any serious outcomes is more a reflection of the deep differences rather than the venue. It could be argued that the same negotiations conducted elsewhere might not fare any better, he added.

Puri said it might be a good idea for the outgoing SG to leave a handing over note for his successor so that some of these vexed and complicated issues could be flagged for attention by the incoming SG to the member states for priority attention.

“It is unlikely, however, that the reality could be altered in the foreseeable future,” Puri predicted.