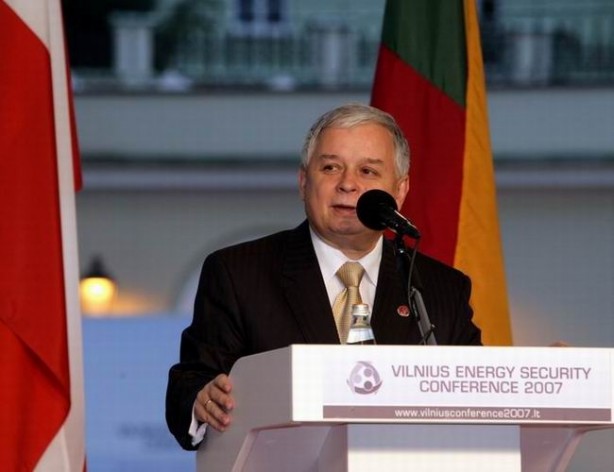 Former President Lech Kaczyński at an energy conference three years before his death. Credit: Archive of the Chancellery of the President of the Republic of Poland/GNU license

WARSAW, Dec 23 2016 (IPS) - Despite the pain to victims’ families, critics say the Polish government is turning the Smolensk plane crash into a macabre reality show for political gain.

The remains of former president Lech Kaczyński and his wife Maria were exhumed Nov. 14 from Wawel Castle in Krakow as part of a state-sponsored investigation into whether the plane crash that killed them in Apr. 10, 2010 was an accident or foul play.

"This catastrophe ...initially united us in mourning [and] later became a tool in the political fight between Law and Justice and Civic Platform.” --Barbara Nowacka, whose mother Izabela Jaruga-Nowacka, a former deputy prime minister, died at Smolensk.

A state-owned Tupolev plane went down while taking Lech Kaczyński and top Polish military and political figures to Russia to commemorate the 70th anniversary of the Katyn massacre in which more than 20,000 Polish soldiers and intellectuals were killed by the Stalinist secret police. Ninety-six people died in the crash.

An investigation conducted under the previous government — the center-right Civic Platform — concluded that the crash was an accident caused by adverse weather conditions and pilot error.

But Jaroslaw Kaczyński, leader of ruling party Law and Justice and twin brother of Lech, has an alternative reading. “The one interpretation that clarifies everything is an assassination,” Kaczynski said, as quoted by the web portal natemat.pl. “If that’s not 100 percent sure, then it’s 99 percent.”

Since the Kaczynski twins founded the party in 2001, Law and Justice has represented a counterbalance to the pro-European, liberal direction of the Polish post-communist transition. Law and Justice are Euro-skeptic and nationalist, Catholic and socially conservative, and advocate for a statist economy.  They speak to those left behind by the transition.

To build up political support, Law and Justice relied on a vision of a Poland under persecution by foreign enemies (especially Russia and Germany) and of Poles as victims of political elites at home, an alleged alliance of communists and liberals.

The Smolensk plane crash happened right at the start of the campaign for the 2010 presidential elections in which incumbent Lech Kaczynski faced Civic Platform’s Bronislaw Komorowski. During the previous three years, Lech’s presidency had been marked by conflicts with Donald Tusk, the head of Civic Platform and prime minister since 2007.

The shock of the tragedy was absorbed into the Law and Justice grand narrative, answering the needs of the campaign: Lech Kaczyński, claimed Law and Justice, was a national hero who fell victim to a lurid alliance between his foreign and domestic enemies, as had happened to Poles many times before.

While Jaroslaw Kaczyński did not win the 2010 presidential election (he ran instead of his brother) nor did his party win the parliamentary election in 2011, Law and Justice spent the next four years in opposition building up a cult of Smolensk which contributed to it winning last year’s election.

The party organised monthly commemoration events and its message was echoed by the Polish Catholic Church and the influential media empire centered around Radio Maryja.

Civic Platform’s strategy of waiting it out and letting Law and Justice politicians make fools of themselves by endorsing a conspiracy theory was a mistake.

According to an October poll by Ipsos, 27 percent of Poles believe Smolensk was not an accident, at least twice as many as five years ago.

Ireneusz Krzeminski, from Warsaw University’s Institute of Sociology, who has looked into responses to Smolensk in Polish society, said the Law and Justice version of the air crash resonated with Poles who “felt unhappy in their lives for different reasons.”

The feeling of perceived injustice was fertile ground for Law and Justice’s rhetoric about a Poland martyred by its enemies, said Krzeminski. The result was hatred towards the alleged enemies, especially Russia and Civic Platform.

Since it got to power in 2015, Law and Justice intensified the instrumentalisation of Polish history. Sociologist Krzeminski notes that commemorations of historical events where Poles have suffered (like the 1944 anti-Nazi Warsaw uprising) are a bigger deal now. School curricula have changed to include more on the traumatic episodes. Krzeminski argues that Law and Justice keeps Poles “in a state of permanent mourning” – it brings support for the party.

This year, Poland announced that it would not back Donald Tusk for a second mandate as President of the European Council. Law and Justice members have mentioned the possibility of putting Tusk on trial for treason over Smolensk, once his Brussels term finishes. With Law and Justice moving to control the justice system in Poland, Tusk’s prospects if prosecuted could be bleak.

The focus on Smolensk is a useful distraction from socio-economic woes. Law and Justice remains popular among its voters because of measures such as subsidies for families with children or lowering the retirement age, but the economy has been slowing down this year and foreign investments are dropping.

In a country with a strong cult of the dead, unearthing bodies and examining them breaks the biggest taboo.

“The (planned) exhumation of my wife represents for me a big trauma and pain, it destroys the peace of my family, it affects our privacy, and it encroaches on our personal wellbeing, which is based on the cult of the memory of our dead,” said Pawel Deresz, whose wife Jolanta Szymanek-Deresz, a lawyer and politician, died in the crash.

Before answering a single question, Deresz pulled out a large photo of his wife and a copy of the Polish Constitution, before reading out Article 47 about “the right to the legal protection of private and family life.”

Deresz had written to Poland’s prosecutor general Zbigniew Ziobro asking him not to exhume his wife. He said he was prepared to sue the Polish government if needed.

He’s not the only relative angered by the decision.

Last month, Izabella Sariusz-Skąpska, the daughter of Smolensk victim Andrzej Sariusz-Skąpski, published an open letter to President Andrzej Duda, asking for the exhumations to be halted.

“We stand alone and helpless against this ruthless and cruel act: our beloved are to be dragged out of their graves despite the sacred taboo of not disturbing the dead,” Sariusz-Skąpska wrote in the letter, which was signed by 238 family members of 17 victims.

Other families, however, want their loved ones dug up and given a proper burial. In six of the nine exhumations carried out under the previous government, there was evidence that Russian authorities had mixed up body parts or coffins in the chaos after the crash.  Others share the government’s suspicions that the crash was no accident.

“This catastrophe …initially united us in mourning [and] later became a tool in the political fight between Law and Justice and Civic Platform,” said Barbara Nowacka, whose mother Izabela Jaruga-Nowacka, a former deputy prime minister, died at Smolensk.

“What is most difficult for me is that now Smolensk has become a kind of religion for some core Law and Justice supporters and they would do anything to prove it was more than a plane crash,” said Nowacka. “And on the other hand the majority of society is either getting tired or trying to get rid of the topic by turning it into a joke, which is painful.”

The Ipsos poll in October showed that only 10 percent of Poles are in favour of the exhumations.

The government is treading carefully and has sought the official backing of the powerful Polish Catholic Church. The unearthing of Lech and Maria Kaczyński was accompanied by a religious mass.

However, the Catholic Church warned that Smolensk should not be exploited for political purposes. Some individual priests have publicly objected.

The government wants to unearth all the bodies by the end of next year, but the investigation could last years.

Unearthing the remains of those whose families think the dead should rest in peace will be hard to justify to the public, especially if nothing suspicious is found upon inspecting the first coffins.