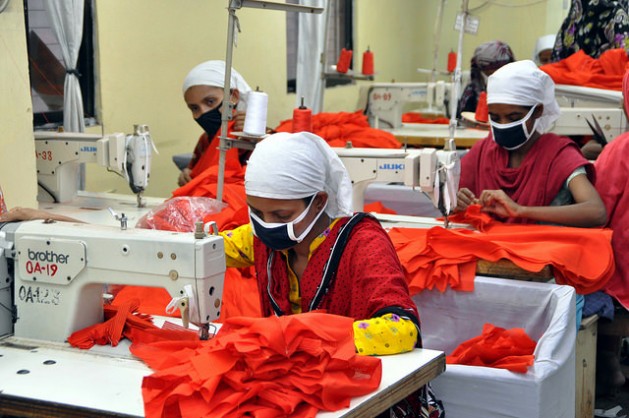 Garment workers in Bangladesh. Should Bangladeshis, Malaysians and others worry about their countries’ downward slide in the ‘Doing Business’ ranking? Credit: IPS

SYDNEY and KUALA LUMPUR, Dec 22 2016 (IPS) - Without any hint of irony, the World Bank’s most recent Doing Business Report 2017 promises ‘Equal Opportunity for All’. Bangladesh ranked 176th among 190 economies, below civil war-ravaged Iraq and Syria! Bangladesh even slipped two places from 174 in the 2016 ranking and is three places below its 2015 ranking.

Malaysia, too, slipped five places. The Doing Business Report (DBR) 2017 ranked Malaysia at 23, down from 18 in the previous two reports for 2015 and 2016. Incredibly, this had nothing to do with news of the biggest scandal ever in the country’s history.

Malaysia seems to have slipped because, it had “made starting a business more difficult by requiring that companies with an annual revenue of more than MYR 500,000 register as a GST payer,” and made tax payments more complex “by replacing sales tax with GST”.

Previously, Malaysia was recognized in DBR 2016 for reducing the property tax rate from 12% to 10% of the annual rental value for commercial properties in 2014, even though this contributed negatively to overall government revenue or public finance.

Thus, ‘be damned if you do, and be damned if you don’t’. Countries are asked to raise domestic revenue, but stand to slip in their rankings if they act to raise tax revenues. Taxation may reduce the incentive to invest, but low tax revenue would also hurt the business environment if it reduces government revenue needed to finance public infrastructure, education, healthcare and business services.

Should Bangladeshis, Malaysians and others worry about their countries’ downward slide in the ‘Doing Business’ ranking? Should those doing better be elated about their elevation in the rankings? The simple answer is ‘no’, but it really depends.

What do the rankings imply? How does the World Bank compare countries with very different economic structures at different stages of development and with varied capabilities address very diverse problems? By ranking countries, the DBR ignores their heterogeneity and essentially treats them as comparable on a single scale.

This serious methodological problem was pointed out by an independent panel in 2013, headed by South Africa’s Vice President and former finance minister Trevor Manuel. It concluded that “The Doing Business report has the potential to be misinterpreted…. It should not be viewed as providing a one-size-fits-all template for development…. The evidence in favour of specific country reforms is contingent on many auxiliary factors not captured by Doing Business report topics.”

By ranking countries, the DBR ignores their heterogeneity and essentially treats them as comparable on a single scale. This serious methodological problem was pointed out by an independent panel in 2013, headed by South Africa’s Vice President and former finance minister Trevor Manuel.
The panel also noted that “the act of ranking countries may appear devoid of value judgement, but it is, in reality, an arbitrary method of summarising vast amounts of complex information as a single number.” It recommended dropping the overall aggregate ranking from the report.

In response to criticisms of overall country ranking, the Bank added a ‘distance to frontier’ measure. Thus, instead of the ordinal measures used for ranking, the ostensible (cardinal) ‘distance’ from the best performance measure for each indicator became the new basis for ranking.

Yet, it does not address the main concern – heterogeneous countries cannot be ranked mechanically. Thus, not surprisingly, the best performers are rich, developed countries.

Besides the external panel, the World Bank also ignored much of its own internal review. For example, its legal unit has been uneasy about the DBR process and findings.

The unit’s September 2012 internal review of the 2013 DBR questioned the ranking’s ‘manipulation’ and noted the ‘embedded policy preferences’ underlying some indicators. It went so far as to accuse the DBR of bias as it ‘tends to ignore the positive effects of regulation’.

For example, the ‘starting a business’ indicator uses the limited liability corporate form as the only ‘proxy’ for business creation. The legal unit considered this approach ‘deceptive’ as there is no evidence that easing “company formation rules leads to increases in business creation”.

The Bank’s legal unit also argued that the DBR methodology is seriously flawed, highlighting ‘black box’ data gaps, ‘cherry picking’ background papers, and ‘double counting’. The legal team even asked, “are high income the Organisation for Economic Co-operation and Development (OECD) countries placed higher in the Doing Business rankings because they have implemented the (types of) reforms advocated by the report?” In its 26 September 2015 issue, The Economist, usually a cheerleader for pro-business reforms, argued that the DBR ranking did not provide a reliable guide to investors.

The DBR survey is generally biased against regulations and taxes. Following earlier criticisms, ease of hiring and firing workers and flexibility of working hours are no longer used in the overall ranking, but nonetheless remain in the report, highlighting the authors’ appreciation of such regulations. Conversely, the DBR continues to look unfavourably on a country which seeks to enhance workplace regulations by improving wages, working conditions or occupational safety, or by allowing workers in export processing zones to unionize.

Surprisingly, the DBR does not cover security, corruption, market size, financial stability, infrastructure, skills and other important elements often deemed important for attracting business investments. Moreover, many DBR indicators are considered to be quite superficial. For example, the survey’s credit market indicator does not reflect how well credit is allocated. Similarly, the DBR survey focuses on how difficult it is to get electricity connected without taking into account the state of electricity generation or distribution, which often depends on a country’s level of development.

The DBR approach is very ‘legalistic’ as it mainly looks at formal regulations without considering how such regulations affect SMEs or other investors besides the stereotypical foreign investor. It also ignores, norms and other institutions including extra-legal processes. For example, Mary Hallward-Driemeier of the World Bank and Lant Pritchett of Harvard compared the DBR with the Bank’s firm surveys. They found large gaps between the DBR report and reality.

They also found ‘almost zero correlation’ between DB findings and other Bank surveys of business enterprises. For instance, the average amount of time that companies report spending on three tasks — obtaining construction permits, getting operating licenses and importing goods — is ‘much, much less’ than those cited in the DBR. [http://pubs.aeaweb.org/doi/pdfplus/10.1257/jep.29.3.121]

Pritchett, who once worked for the Bank, has argued that developing country policy makers focusing on improving their DBR rankings could divert scarce resources away from more important and urgent reforms, e.g., to help the government better administer, implement and enforce business regulations.

“The pretense that Doing Business measures the real rules, and that if we just modestly improve these Doing Business indicators, they would somehow become the reality of what the rules are and how business is really done — I think that’s a very dangerous fiction.” [http://blogs.wsj.com/economics/2015/08/04/is-the-world-banks-doing-business-report-at-odds-with-how-business-is-done-in-the-developing-world/].

In sum, the DBR assumes that there are universally ‘good’ and ‘bad’ policies regardless of context. This approach clearly misses the need for concrete analysis in specific contexts. Not surprisingly, the DBR continues to promote deregulation as the best strategy for promoting economic growth. To be fair, the Bank acknowledges that the DBR should not be seen as advocating a one-size-fits-all model, but the Bank’s own promotion and coverage of the report suggests otherwise.