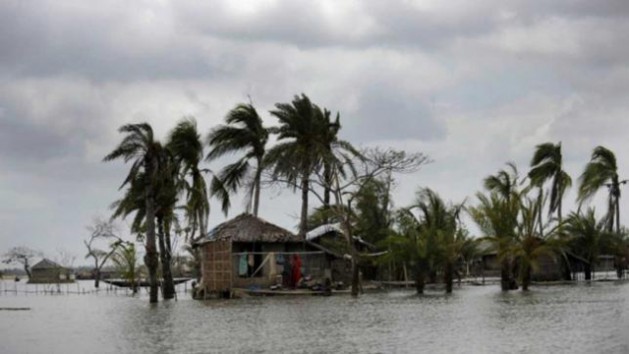 Bangladesh has been one of the worst victims of global warming, with thousands of people being killed by cyclones in recent years that have become more frequent and deadlier. PHOTO: AFP

Jan 27 2017 - Under the United Nations Framework Convention on Climate Change (UNFCCC), developed countries have agreed to provide developing countries with USD 100 billion per year, starting from 2020 onwards, to help tackle climate change through both mitigation and adaptation.

They also created a new funding body called the Green Climate Fund (GCF) to channel the money through. The GCF is an independent entity with its headquarters in Songdo, Korea, and its own board with half of its members belonging to developed countries and the other half to developing countries. Bangladesh has been a member of the board for a number of years on behalf of the Least Developed Countries (LDC) group but will be stepping down soon to be replaced by Malawi.

The fund is already up and running, and has received about USD 10 billion already, which it has started allocating to developing countries.

The GCF Board has decided to allocate half their funds to support mitigation actions to reduce emissions of greenhouse gases and half for adaptation, which will in turn be prioritised towards the LDCs, the small island developing states (SIDS) and Africa.

The GCF has also introduced two modalities for receiving applications for funding, one is through Multilateral Implementing Entities (MIEs), such as UNDP, FAO, UNEP etc, and the other is through National Implementing Entities (NIEs), which are selected entities from each developing country. Both MIEs and NIES have to apply for and receive accreditation by the GCF Board before they can then apply for project funding. The accreditation process is quite time-consuming and cumbersome, and requires the applicant organisation to demonstrate that it has good fiduciary, governance, gender, and monitoring rules and procedures. Each developing country government also has to appoint a National Designated Authority (NDA) who will approve candidate organisations for applying for NIE accreditation. Such entities can be from the public or private sector, or also from NGOs.

The government of Bangladesh appointed the Economic Resources Division (ERD) of the Ministry of Finance (MOF) as its National Designated Authority over a year ago, and since then, the division has been engaging with a number of public and private sector entities and NGOs to encourage them to consider applying to the GCF for accreditation to become National Implementing Entities. So far six public sector entities have started the process of applying for NIE status, but this is taking a long time as the GCF requires a lot of documentation, and there is a lot of back and forth with queries. It is to be hoped that at least a couple of entities should be able to get the NIE status soon.

In the meantime, some ministries and agencies of the Bangladesh government have also applied for projects through MIEs, which had already been accredited by the GCF. The first such project was for enhancing the resilience of small-scale infrastructure projects by the Local Government Engineering Department (LGED), which was submitted through the German Development Bank, KFW, while the GCF Board has approved approximately USD 40 million as grant with some matching funds from the government.

The second project has been submitted by the Ministry of Women’s And Children’s Affairs (MOWCA) through UNDP for nearly USD 80 million for providing safe drinking water to women and girls in coastal areas suffering from saline intrusion in their drinking water. This project was sent back by the GCF Board from its last meeting with advice to revise and resubmit it later with better justification as to why it is a climate change project and not just a development one.

Even though the experience of the GCF is itself new and evolving, and Bangladesh has been engaging with them for a relatively short while, it is still possible to draw some early lessons.

The first lesson is that we need to build the capacity of our own NDA, NIEs and public and private sector about what climate change is, and how a climate change project or activity differs from a normal development project. Thus, simply trying to sell old wine in a new bottle will not work. The second lesson is that having transparent and robust systems to both track where climate finance is flowing and also monitor whether it is being used effectively is extremely important. As Bangladesh will have to compete with other vulnerable countries to get climate funding, merely asserting our high vulnerability to climate impacts will only get us sympathy but no money. In order to get funds over a period of time, we will have to demonstrate absorption capacity with transparent and robust monitoring systems as well.

Given that it is still early days for global climate finance to start flowing, there is still time for Bangladesh to learn how to access the funds and build good transparent systems to track the funds and robust systems to monitor their use. In the longer run, our ability to get a reasonably fair share of these global climate funds lies in whether we can rise to the challenge of building our own capacity and systems.

The writer is Director of the International Centre for Climate Change and Development at Independent University, Bangladesh Email: Saleemul.huq@iied.org