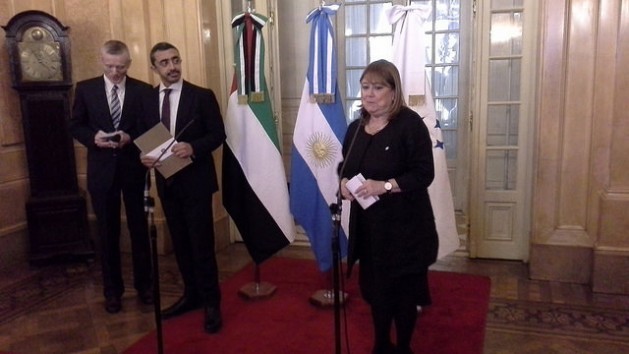 Argentine Foreign Minister Susana Malcorra and her counterpart from the UAE, Sheikh Abdullah bin Zayed Al Nahyan, give a press conference after their working meeting in the foreign ministry in Buenos Aires. Credit: Daniel Gutman/IPS

BUENOS AIRES, Mar 17 2017 (IPS) - Argentina and the United Arab Emirates (UAE) agreed Friday Mar. 17 to explore the possibility of this South American country receiving investment from the Gulf nation, particularly tourism and health, while they pledged to strengthen bilateral relations and increase trade.

This was reported by Argentine Foreign Minister Susana Malcorra and her counterpart from the UAE, Sheikh Abdullah bin Zayed Al Nahyan, during the latter’s official visit to Buenos Aires.

The two ministers held a working meeting at the San Martin Palace, the headquarters of Argentina’s foreign ministry, then gave a brief press conference before having lunch with Argentine Vice President Gabriela Michetti.

“This week started and ended for us with the United Arab Emirates, which shows the importance that both countries put on this relationship and the shared interest in reinforcing our friendship,” Malcorra said.

She was referring to the visit to Argentina early this week by a high-level delegation from the Abu Dhabi Investment Authority (ADIA), considered the second-largest sovereign wealth fund in the world, headed by Sheikh Hamed bin Zayed al Nahyan, that came to learn about the present economic situation and business climate in the country.

The delegation was received in the Casa Rosada, the seat of the central government, by President Mauricio Macri. The members of the delegation also met with Malcorra, Michetti, the president of the Central Bank, Federico Sturzenegger, and the ministers of the treasury, finance and energy and mines.

In addition, they held meetings with business representatives from different sectors of the economy: oil, steel, agriculture, food, real estate, energy and finance, among others.

Malcorra wore black at Friday’s meeting to commemorate the 25th anniversary of the Mar. 17, 1992 terrorist attack on the Israeli Embassy in Buenos Aires, which left 22 dead and dozens injured.

During the news briefing, Minister Al Nayhan expressed his solidarity referring to the incident and said he hoped nations “will work more effectively to put a stop to terrorism.”

He had a message of political support for President Macri, congratulating the government on its determination “to take the very brave steps it has been taking to ensure that Argentina becomes the country it deserves to be, generating openness, not only for tourists but also for investors and for its different partners and allies.”

Since Macri, of the centre-right Cambiemos alliance, took office in December 2015, one of his priorities has been to generate the conditions for drawing foreign investors to Argentina and improving the country’s access to global credit markets.

The measures he has taken to that end include an agreement to pay 4.65 billion dollars to holdout hedge funds, creditors that have been in conflict with Argentina since the late 2001 default declared in the midst of the severe economic crisis that led to the resignation of then president Fernando de la Rúa.

This is the second time that the UAE foreign minister has visited Buenos Aires since Macri became president. The first visit was in early February 2016, when the main aim was to meet the new authorities here.

In November 2016, an Argentine delegation headed by Vice President Michetti visited the UAE and held several meetings, with the aim of “attracting investment and generating jobs for our countries,” as the vice president stated at the time.

In the trade balance between the two countries Argentina – which mainly sells food to the Gulf nation – has a surplus of 133.6 million dollars.

“Although it is true that trade between our countries has not yet reached the levels that we would like, our presence will help it grow and will bring about a greater presence of the United Arab Emirates in terms of investment in Argentina. We have also been exploring opportunities to reach cooperation accords involving third parties, and we are optimistic,” said the Emirati foreign minister.

For her part, Malcorra referred to the sectors in which Argentina could receive investment from the UAE.

She especially mentioned “tourism, not only to draw a significant number of visitors from the Emirates, but also as an opportunity for investment in the hotel industry,” and “health, since the Emirates has become a model health centre, which draws people from the entire region; we are looking at the possibility of exchange and complementarity in this area.”

The Argentine minister also reported that a memorandum of understanding was signed regarding visas, “to facilitate the exchange between the two countries.”

During the visit, Malcorra gave Minister Al Nahyan a letter from Macri in which the president promised that Argentina would take part in the Expo 2020, the world fair to be held in Dubai between October 2020 and April 2021, which is expected to be visited by 25 million people, 70 percent of them from abroad.

The Emirati minister came to Argentina from Brazil, the other leg of his current South America tour, where he signed three agreements on Thursday Mar. 16 with his Brazilian host and counterpart, Aloysio Nunes. Al Nahyan will return from Buenos Aires to Brazil, where he will inaugurate the UAE consulate-general in São Paulo on Tuesday Mar. 21.