UNITED NATIONS, Mar 22 2017 (IPS) - “Water is life”—a slogan that arose from the anti-Dakota Access Pipeline movement is one that resonates not only in the U.S., but around the world as millions still lack access to clean, safe water.

At the UN, representatives across sectors gathered to discuss and raise awareness of such issues for World Water Day.

“Water is the foundation of our life…if we don’t have clean water, we will not be healthy,” said Founder of Water for South Sudan Salva Dut to IPS.

According to the UN, approximately 1.8 billion people do not have access to safe drinking water and instead use contaminated water sources. Unsafe water, poor sanitation and hygiene cause around 842,000 deaths each year.

Dut created his organisation after his father became ill from unclean drinking water. Upon drilling the first well in his father’s village, Dut found a trickle down effect.

“I put a well down—now we have a school, a clinic, a market,” he said.

Dut particularly noted its impact on women and girls who are often tasked with collecting and carrying water over long distances.

“Seeing these young girls whose jobs are to go long distances to collect water, now they have the opportunity to go to school,” he told IPS. 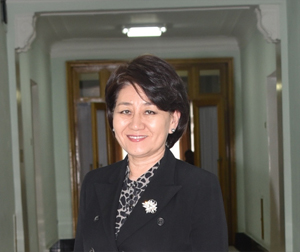 “With population growth, people will need more food. With needing more food, one will need more agricultural products, and 70 percent of all the freshwater used is used for making food,” she told IPS.

Sanjaasuren and Dut both highlighted the need to recycle and save water.

“There is probably enough water resources in the world, but only if it is managed well,” Sanjaasuren said.

She pointed to the need to not only develop innovative, modern technologies to address the issue, but also to identify “simple” places to implement small interventions that can lead to change including food loss and waste.

According to the Food and Agriculture Organisation (FAO), approximately one-third of all food produced in the world is lost or wasted. If food loss and waste were a country, it would be the third largest greenhouse gas emitter after the U.S. and China. Due to the significant amount of water used in food production, food loss also leads to a loss of one-fourth of all water used to produce food.

Sanjaasuren said the loss of such precious resources must be addressed, and reducing food loss and waste is one path to good water governance and sustainable development.

“The most important thing is to not take water for granted as an unreplenishable resource,” she continued.

Through the Sustainable Development Goals (SDGs), adopted in 2015, governments committed to achieving goals on various water issues including universal and equitable access to safe water; access to adequate sanitation and hygiene; and expanding international cooperation and capacity-building support to developing countries.

Dut stressed the need for the international community to continue supporting South Sudan despite its ongoing conflict.

“South Sudan today is the youngest nation in the world—it is a baby. And when you see your baby walk into the fire, you always run and stop it so it doesn’t get hurt. Whatever is going on in South Sudan today, we still need to support them,” he told IPS.

Half of the population in South Sudan does not have access to safe drinking water while more than 70 percent lack access to sanitary latrines. In displacement camps, hygiene and sanitation are inadequate. Mercy Corps found that flooding has collapsed latrines in some camps, forcing people to walk through knee-high, contaminated water.

Dut said that the international community must continue to provide aid not only for relief, but for development as well.

“If we support these people, they will be able to stand up by themselves,” Dut continued.

Sanjaasuren and Dut particularly pointed to the need to stop water contamination and to reduce or reuse waterwaste, the theme for this year’s World Water Day.

Globally, over 80% of generated wastewater flows back into the ecosystem without being treated or reused. Polluted environments, including unsafe water, cause one-fourth of the global burden of disease, particularly affecting children under the age of five.

Most recently, Bangalore’s Bellandur Lake caught on fire due to illegal waste dumping and mass untreated sewage. The pollution has threatened residents’ health and caused a chronic shortage of clean water. Experts have predicted that the health and water crisis may make Bangalore uninhabitable by 2025.

“It is a very crucial time to change the way we deal with things and how we solve problems,” Sanjaasuren told IPS. The use of treated wastewater in agriculture is one such solution, contributing to water, food, health and environmental security.

In order to achieve this, Sanjaasuren called for an integrated water resource management in which actors at all levels gather at the discussion table. Dut highlighted the role that World Water Day plays in bringing such discussions.

“Thanks to the UN for this World Water Day to really pay attention and let the world to be aware that water is very important in our lives,” Dut told IPS.

World Water Day, which is held on 22 March every year, aims to raise awareness and take action on water issues.