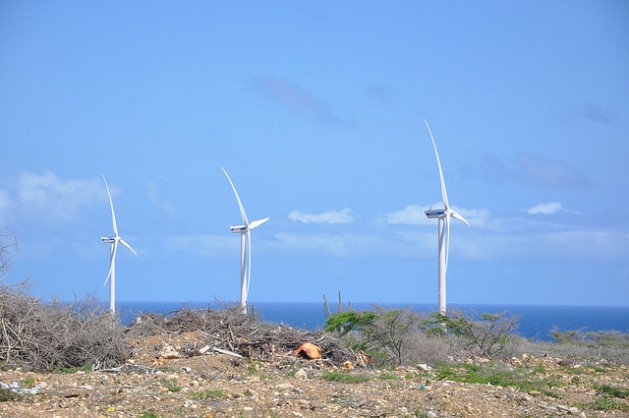 BRIDGETOWN, Barbados, Apr 14 2017 (IPS) - Barbados and its Caribbean neighbours are continuing to press ahead with their climate change agenda and push the concept of renewable energy despite the new position taken by the United States.

This was made clear by the Minister of the Environment and Drainage in Barbados, Dr. Denis Lowe, against the background of the position taken by U.S. President Donald Trump that climate change is a “hoax”, and his subsequent push for the revitalisation of the coal industry, and the issuance of an Executive Order to restart the Dakota Access Pipeline.

“We stand ready to do what needs to be done." --Dr. Denis Lowe

“The moment has come. The President of the United States of America has determined that climate change is really a hoax, and that any notion about climate change science is based on false belief, and that there is no clear justification that this phenomenon called climate change exists,” Lowe said.

However, the Environment Minister pointed out that while Trump was “decrying” the legitimacy of climate change, 2016 was already being labelled as the warmest ocean temperature year.

“The impact of that accelerated warmth of the earth, according to American environmentalists, is the Michigan coastline, Lake Michigan. Evidence has been produced to show that the impact of climate change has affected that whole seaboard area, including the erosion of beaches along the Illinois Coast. This is a fact as reported,” he said.

Dr. Lowe cautioned that the new US position spelled “bad news” for the Caribbean.

He warned that the new position could see a significant reduction in funding from the United States to the United Nations system, which was the primary driver of the climate change fight.

But Lowe stressed that the region could not allow itself to be “hemmed in” by what might or might not occur relating to international funding.

He gave the assurance that his Ministry and Government would continue “to plough” ahead and look for unique ways to fund the island’s coastal rehabilitation and green energy programmes.

“We stand ready to do what needs to be done. Our Ministry continues to work with our stakeholders to look for ways to continue to press ahead with our climate change agenda,” Lowe said.

“We ask Barbadians from all walks of life to assist us in adopting and practising habits that would reduce the impacts of climate change on us as it relates to our water supply, our conservation effort, and our preservation efforts in terms of our spaces around the island that would be of importance,” he added.

Meanwhile, New York-based syndicated columnist Rebecca Theodore, who has written extensively on climate change and renewable energy in the Caribbean, said while President Trump seeks for a revitalisation of the coal industry in the United States, this will need more than government policy in Washington to be implemented.

“First, renewable energy sources like wind and solar are much more price-viable than coal. The demand for jobs in renewable energy is going up while for coal it’s rapidly going down,” Theodore told IPS.

“Secondly, the moral arguments and market forces in which the production of coal as an energy source are interlaced cannot be ignored. Carbon emissions from coal-fired power plants are the leading cause of death in many places and continue to be a hazard to public health.

“Thirdly, if the Clean Power Plan is to achieve its aims of cutting carbon dioxide emissions from power plants, then there must be a reduction in coal consumption,” Theodore added.

She also noted that carbon pollution from power plants is one of the major causes of climate change.

“It follows that if the United States must continue the fight in the global efforts to address climate change then the goal must be centered on cheap natural gas and the installation of renewable energy plants, Theodore told IPS.

“There must be options for investment in renewable energy, natural gas and shifting away from   coal-fired power.”

Earlier this year, the Inter-American Development Bank (IDB) said a significant portion of the 13 billion dollars it will be lending this year has been earmarked for agriculture, climate change and renewable energy projects.

IDB Executive Director Jerry Butler noted that the issue of renewable energy has been a constant focus for the institution.

Highlighting the IDB’s commitment to the region, Butler noted that even though the Eastern Caribbean States are not members of the bank, through its lending to the Caribbean Development Bank (CDB), countries in the sub-region have not been left out.

“For example, the more than 80 million dollars that’s devoted to geothermal exploration, Grenada will be the first beneficiary in the Eastern Caribbean,” he said.

Butler said the IDB believes that the sustainability, the competitiveness and the job-creation potential of the Caribbean can be unlocked “if there is a considered focus on weaning ourselves off the dependence on foreign fuels for generation” and focusing on “producing its own indigenous type of energy”.