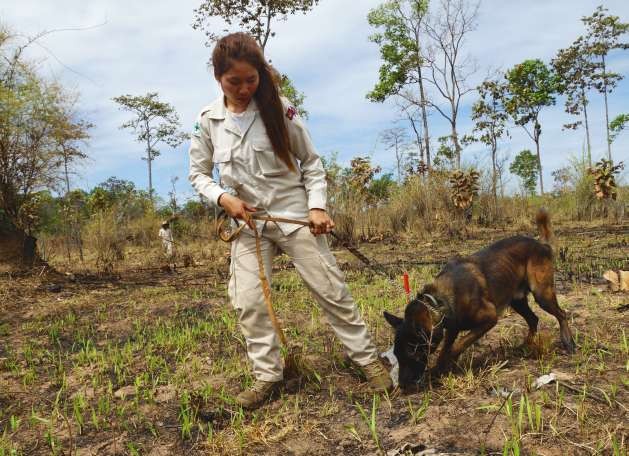 Mao Neav is the leader of a small group of bomb and mine clearers working in the Ratanakiri province of north-east Cambodia. Credit: Erik Larsson/Arbetet Global/IPS

PHNOM PENH, Apr 24 2017 (IPS) - Mao Neav takes a few quick steps out into the field, followed by her faithful dog Onada, tail wagging, tongue out and panting, ready for what is out there. The field is peppered with cluster bombs.

Mao Neav is the leader of a small group of bomb and mine clearers working in the Ratanakiri province of north-east Cambodia.

Working hours: A shiftplan of 7 working days living on the NPA site, followed by 2 weeks off. Working days start in the mine fields at 7 a.m. and goes on until lunch by when it’s too hot to work, at which time they return to base to pratice exercises, look after the dog and do maintanaince on the equipment.

The best part of the job: I am most happy when the dog obeys my instructions and we find a bomb

The worst part of the job: the afternoon heat
Her job for the past two years has been to clear the bombs and land mines that litter what was once part of the so-called the Ho-Shi-Minh trail. With the Vietnamese border only 70 kilometres away, this area was part of the logical system that routed supplies for the North Vietnamese troops during the Vietnam War.

US carpet bombing of Cambodia began in 1970 in an attempt to break the supply chain. 47 years later, there are still plenty of cluster bombs stuck in the ground, and they are still a threat to all passers through.

NPA is the Norwegian People’s Aid, which is the Norwegian labour movement’s ”humanitarian solidarity organisation”. The NPA fund and lead the project. They purposely hire women to prove that women can do mine clearing work too, which generally is very male-dominated in Cambodia.

Twenty-five of the thirty-five clearers at the base in Ratanakiri are women. Mae Naev says ” There’s no difference between us. We are as skillful as the men”.

A six-month training course is what the NPA require for new employees. ”We started with one-month of learning to use the metal detector”.

Thereafter she learned to identify the different types of bombs and mines and how they work respectively.

In this area there are many undetonated cluster bombs. The most common are BLU 42, 26, 52 and 54 according to the US airforce codes on the bombs that were released here. In eastern Cambodia these cluster bombs are a major problem for farmers and others that pass through the forests.

In western Cambodia land mines are a greater problem. In the whole country, on average, about two people are maimed or killed every week.

The total amount of land mines in the country is estimated at around 4 million, thus making Cambodia one of the worst sufferers of undetonated bombs and mines in the world.

There are somewhere between 3 and 4 thousand bomb clearers in Cambodia. The country is among the worst afflicted by bombs and mines in the world. In eastern Cambodia, along the border to Vietnam, the main problem is undetonated cluster bombs. In western Cambodia, towards the Tborder to Thailand, the main problem is land mines. Estimates are that there are about 4 million land mines buried in Cambodian soil and no one knows exactly where. Between 80 and 100 people are hurt or killed every year due to detonations.
Clearing cluster bombs is much simpler than mines.

”Cluster bombs are supposed to explode immediately on impact. That’s why they don’t have a trigger and the risks of explosion are less. Land mines though, are worse”.

”I love dogs. Being with them is my favorite part of the job”.

Dogs are used to sniff out the explosives.

During training she also learned mine clearing techniques. A grid technique divides a specific area into a grid. The clearers then move according to set patterns within each section, marking each find for later transport and destruction.

”The first time I stepped out into a mine field I was afraid. But that passed quickly”

”My worst experience? I was bitten by my dog once”, she adds.