We Have to Reclaim the Public Policy Space for SDGs 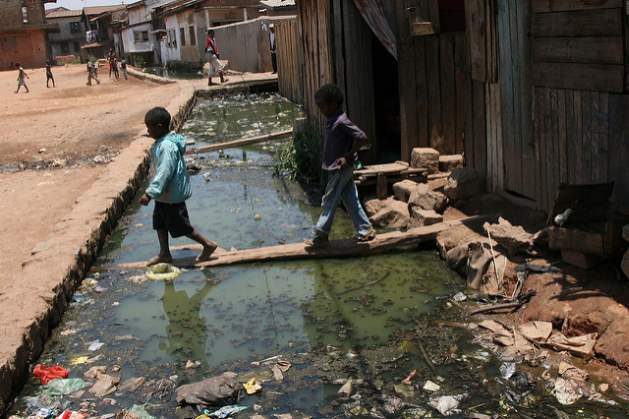 BONN, Jul 13 2017 (IPS) - At the High-Level Political Forum which currently takes place at the United Nations in New York several events, for instance a SDG Business Forum, are devoted to the critical role of business and public-private partnerships (PPPs) in implementing the 2030 Agenda for Sustainable Development.

But many civil society organizations and trade unions warn in their joint report Spotlight on Sustainable Development 2017 that the various forms of privatization and corporate capture have become obstacles to implement the 2030 Agenda and its goals.

Weakening the State: A vicious circle

The trend towards partnerships with the private sector is based on a number of assumptions, not least the belief that global problems are too big and the public sector is too weak to solve them alone.

But why is it apparently a matter of fact that the public sector is too weak to meet the challenges of the 2030 Agenda? Why are public coffers empty?

In fact, the lack of capacity and financial resources is not an inevitable phenomenon but has been caused by deliberate political decisions. To give just one example, over the past three decades corporate income tax rates have declined in both countries of the global North and South by 15 to 20 percent. Hundreds of billions of US dollars are lost every year through corporate tax incentives and various forms of tax avoidance.

Through their business-friendly fiscal policies and the lack of effective global tax cooperation, governments have weakened their revenue base substantially. This has been driven not least by corporate lobbying.

A recent analysis by Oxfam America estimates that between 2009 and 2015, the USA’s 50 largest companies spent approximately US$ 2.5 billion on lobbying, with approximately US$ 352 million lobbying on tax issues. In the same period, they received over US$ 423 billion in tax breaks.

What we see is a vicious circle of weakening the State: the combination of neoliberal ideology, corporate lobbying, business-friendly fiscal policies, tax avoidance and tax evasion has led to the massive weakening of the public sector and its ability to provide essential goods and services.

These failures have been used by the proponents of privatization and PPPs to present the private sector as the better alternative and to demand its further strengthening. This in turn further weakened the public sector – and so on….

In parallel, the same corporate strategies and fiscal and regulatory policies that led to the weakening of the public sector enabled an unprecedented accumulation of individual wealth and increasing market concentration, often at the expense of small and medium-sized enterprises.

According to various statistics of the largest national economies, transnational corporations, banks and asset management firms, among the 50 largest global economic entities are more private corporations than countries. The assets under management by the world’s largest asset management company BlackRock are US$ 5.12 trillion (end of 2016), thus higher than the GDP of Japan or Germany.

Large institutional investors such as pension funds and insurance companies are also the drivers of a new generation of PPPs in infrastructure, forcing governments to offer ‘bankable’ projects that meet the needs of these investors rather than the needs of the affected population.

Particularly alarming for the implementation of SDG 2 on food security and sustainable agriculture are the announced mega-mergers in the food and agriculture sector, especially the acquisition of Syngenta by China National Chemical Corporation (ChemChina), the merger of Dow Chemical and DuPont and the takeover of Monsanto by Bayer.

The Spotlight Report 2017 clearly shows, that privatization, PPPs and the rise of corporate power affect all areas and goals of the 2030 Agenda. One example is the mushrooming of private, fee-charging, profit-making schools in Africa and Asia.

Detrimental corporate influence occurs in the energy sector with the still dominant role of coal and fossil fuel industries, undermining effective measures against climate change and the transformation towards sustainable energy systems.

But why is it apparently a matter of fact that the public sector is too weak to meet the challenges of the 2030 Agenda? Why are public coffers empty?
Studies by scholars, CSOs and trade unions like Public Services International (PSI) have shown that the privatization of public infrastructure and services and various forms of PPPs involve disproportionate risks for the affected people and costs for the public sector. They can even exacerbate inequalities, decrease equitable access to essential services, and thus jeopardize the fulfilment of human rights, particularly the rights of women.

Responding to the experiences and testimonies from the ground about the devastating impacts of privatization and PPPs, counter-movements emerged in many parts of the world. Over the past 15 years there has been a significant rise in the number of communities that have taken privatized services back into public hands – a phenomenon called “remunicipalization”. Remunicipalization refers particularly to the return of water supply and sanitation services to public service delivery. Between March 2000 and March 2015 researchers documented 235 cases of water remunicipalization in 37 countries, affecting more than 100 million people.

Furthermore, some pioneering companies are already on the path towards – at least environmentally – sustainable development solutions, for instance in the area of renewable energies.

The private sector is in no way a monolithic bloc. Firms in the social and solidarity economy, social impact investors and small and medium-sized businesses are already making a positive difference, challenging the proponents of global techno-fix solutions and the dinosaurs of the fossil fuel lobby.

Even the firm opposition to international corporate regulation in the field of business and human rights by those pretending to represent business interests is showing cracks. A survey by The Economist Intelligence Unit revealed that 20 percent of business representatives who responded to the survey said that a binding international treaty would help them with their responsibilities to respect human rights.

What has to be done?

To be sure, the business sector certainly has an important role to play in the implementation process of the 2030 Agenda, as sustainable development will require large-scale changes in business practices.

However, acknowledging corporations’ role should not mean promoting the accumulation of wealth and economic power, giving them undue influence on policy-making and ignoring their responsibility in creating and exacerbating many of the problems that the 2030 Agenda is supposed to tackle.

Instead of further promoting the misleading discourse of ‘multi-stakeholderism’ and partnerships between inherently unequal partners a fundamental change of course is necessary. In order to achieve the SDGs and to turn the vision of the transformation of our world, as proclaimed in the title of the 2030 Agenda, into reality, we have to reclaim the public policy space.

Governments should strengthen public finance at all levels, fundamentally rethink their approach towards trade and investment liberalization, reconsider PPPs, create binding rules on business and human rights, take effective measures to dismantle corporate power and prevent the further existence of corporate ‘too big to fail’ entities.