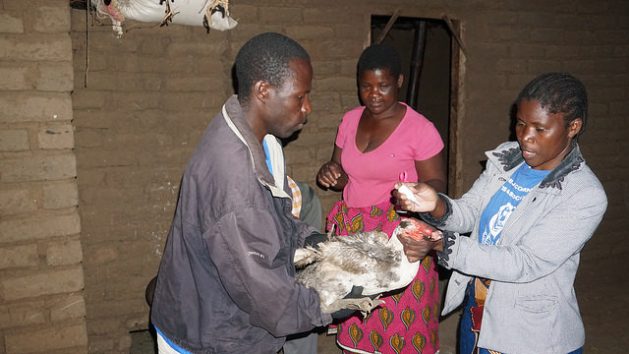 A poultry farmer from Lumbwe village in Malawi hands her chickens to Lydia Katengeza to administer a vaccine against Newcastle Disease. Credit: Charles Mkoka/IPS

LILONGWE, Sep 27 2017 (IPS) - Lydia Katengeza, a community vaccinator with the Nathenje Community Vaccination Association (NCVA), wakes up as early as 5 a.m., ready with her I-2 vaccine vial in a storage container in her hand. She moves from one house to another, visiting each poultry farmer. All of them are alerted a day in advance so that they don’t release their free-range chickens in the morning.

The first farmer she visited when an IPS reporter accompanied her on her rounds was Maxwell Panganani, who owns 30 chickens. The whole flock was given the vaccine, which protects poultry from the deadly Newcastle Disease (ND) and costs four cents per chicken. This means Katengeza collected 1.24 dollars from this farmer.

Raised by 80 percent of local farmers, poultry is the greatest contribution to household food and nutritional security of all livestock species in Malawi.

She moved on to other households: Makalani Kumapeni, whose 51 chickens were given the vaccine; Chipiliro Kanamwali with 11 chickens; Peter Lumbwe with 24 chickens; Zeze Lumbwe with 14 chickens, Frank Thamisoni with 12 chickens and Samuel Asipolo, who just owns one.

Raised by 80 percent of local farmers, poultry is the greatest contribution to household food and nutritional security of all livestock species in Malawi. Farmers use chickens during weddings, funerals and other rituals, and for sale or as gifts. They are also bartered for other products.

However, despite the important role that chickens play in supporting households in rural areas, there is a major constraint to the expansion and increased productivity of poultry – the frequent devastation of flocks, up to 90 percent, according to the Department of Animal Health and Livestock Development (DAHLD). This damage is caused by ND, which strikes during the hot, dry months of August through to November annually.

The virus presents primarily as an acute respiratory illness, and is one of the most serious of all avian diseases. It is also transmissible to humans.

“We were first trained as farmer field facilitators in 2014 under a CARE Malawi programme. Later CARE linked us with Inter Aide, a French organization that provided us training in the procedures of how to be a community vaccinator,” says Katengeza, who is also village head woman of Chizinga in Traditional Authority Kalumbu, Lilongwe district.

According to Katengeza, the knowledge and procedures learnt during vaccine administration have been of great benefit to her as a farmer. As a result of the training, her chickens no longer die of ND. And as a ripple effect, she has also managed to help her fellow farmers to overcome the disease.

“I now have 10 goats, harvested 70 50-kg bags of maize this year, moulded bricks and built a good house. I am also able to pay school fees for my kids. As a family, we have sustained access to proteins as body-building foods from chickens once slaughtered,” says Katengeza.

She said CARE and Inter Aide have changed her life and that of other farmers.

Another farmer, Eveless Makalani, with a flock of 51 birds, has worked with community vaccinators for some time. She learned about them during the farmer extension meetings they conduct in the village.

“My family gets help from these chickens, especially during funerals and weddings, but also in the event of problems. We sell some of them as they are in high demand on the market, unlike hybrids.”

Malakani adds that the money earned from selling one chicken pays for the vaccination of over 50 chickens from ND – making it a viable business.

Yolomosi Tifere, a male community vaccinator who serves farmers in the Nathenje area, said the project should be expanded to include other health supports.

“This vaccine is for ND fine and good. However, we also need other drugs to address bacteria, cough, intestinal worms so that these problems are also taken care of,” Tifere said in an interview during the field visit.

“During the first month, community vaccinators go house to house to do poultry registration, like how many chickens to vaccinate, how many vials are needed. The second month is for the actual vaccination of the chickens and the fourth month is for review of the success and challenges.” Archer explained in an interview.

The peak of the campaign takes place in July because the risk of an outbreak is high. This is when farmers have more money and exchange more chickens and there is a greater probability for them to become infected with ND.

“There is more acceptance from the farmers in July than the two other campaigns. For instance, last year we vaccinated 590,800 chickens,” says Archer, who expressed concerns about the erratic supply of the drug from CVL.

In order to ensure sustainability of the programme, NCVA was formed to strengthen local participation in the fight against ND. Meanwhile, the Global Alliance for Livestock Veterinary Medicine is working in partnership with Inter Aide to improve the nutrition and livelihoods of smallholder livestock producers, and enhance family farm productivity and resilience in an increasingly changing climate.

“The I-2 vaccine is thermal tolerant demand driven, people see the benefit of vaccinating chickens so there is exponential growth for the vaccine need. However, production is not managed as an enterprise due to shortage of financing of the drug, hence its erratic availability,” Archer explained.

Gilson Njunga, Officer in Charge at the CVL, says they produce 3,000 bottles of the vaccine per month which translates to about a million dosages administered to chickens, as each bottle accommodates 300 chickens.

“Production of the vaccine vial is at 3,000 bottles monthly because we produce the vaccine within a diagnostic laboratory and not an independent vaccine lab. As such, the production process has to pass through quality control before being certified for use by farmers to ensure they are not contaminated,” Njunga told IPS.

Meanwhile, as a further step towards attaining food and nutritional security, the Food and Agriculture Organization of the United Nations and the Malawi Government agreed on a Country Programme Framework estimated at 24.3 million dollars. The rationale for the proposed CPF priority areas is derived from the analysis and the enabling environment for Food and Nutrition Security and Sustainable Agriculture.

The analysis demonstrates that while the country is making good progress in food security and staple crop production, it remains vulnerable to shocks – many climate-related – that impede increased agricultural production, productivity and profitability.