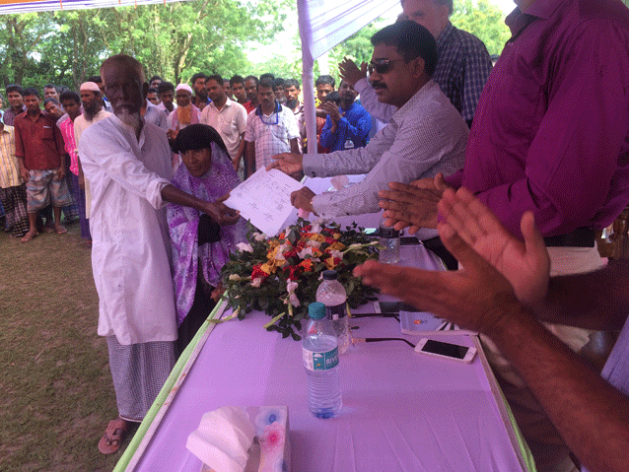 Maijdee, Noakhali (Bangladesh), Oct 13 2017 (IPS) - History was made for 400 landless families in the remote char lands of Noakhali district. On 4th October, they all received land titles from the government for which they had waited for over two decades. In Bangladesh, as in other countries, the title is a permanent legal ownership document.

Over a thousand people, including the landless families, children, friends and neighbours, gathered under a big colourful ‘pandal’ (marquee) near Saddam Bazar of Nolerchar. It was a sunny but very hot day, with temperatures between 37 to 39 degrees Celsius. Everybody was sweating in the sweltering heat but it didn’t matter because this was a day for celebration, a day they had waited for a very long time.

At noon when the top district official, Deputy Commissioner Md. Mahbubul Alam Talukder arrived, everyone gave him and the accompanying officials a warm welcome by standing up and clapping. Soon the officials began announcing names of the beneficiaries of land titles. The very first ones to be called were Afrusa Begum (68) and her husband Shafiul Alam (72).

They both looked frail and older than their real age. They walked slowly to the dais to receive the land title from DC Talukdar. Both of them broke down, saying they had waited for 25 years for this day and never thought that they would get the land title in their lifetime. They are now free from uncertainty and no one can uproot them from their land again. Other recipients of land titles, Rima Akther, Md. Shamim, Panna Begum and Md. Asraf were all overjoyed and could not hold back their tears. 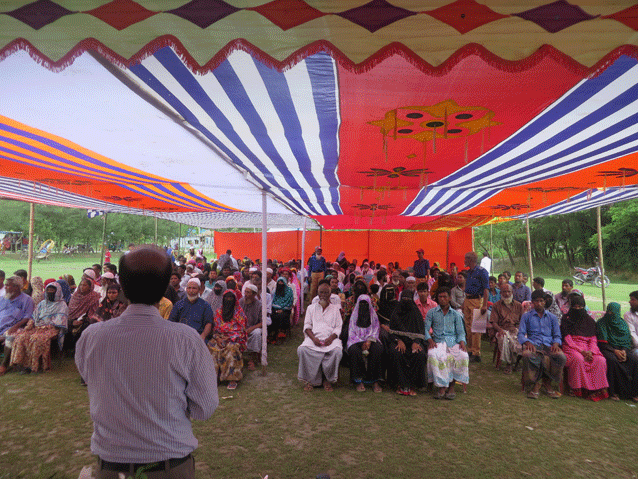 landlees families are waiting in a colourful pandal.

Panna Begum and Md. Asraf came with their one-month-old baby girl Noor Jahan Begum. Panna said, “Our life was horrible and full of tension. Never, ever settled down peacefully, moving all the time. Today I am so happy I can’t express it in words. I can only say that my daughter will take her first step on our own land and grow up with a secure life. We are saluting the government and the people who helped us.”

Officials of the Char Development and Settlement Project Phase IV (CDSP IV) helped to make their dreams come true. The project introduced processes to improve the position of women in regard to land rights. A wife’s name is now written first in the legal document. As a result, she is legally entitled to 50 percent of the land.

This strengthens her position in the family and in many decision-making processes. Also, if the husband abuses his wife or there is evidence of any illegal actions on his part, legal action can now result in him losing his share of the land.

DC Talukder addressing the land title recipients said, “The government is very much pro people and has come to your door to address your issues. Today is one of its best examples shown by concerned officials of the district who have come to you to hand over the land titles properly. We hope you will now build a future with happy families without any fear and further complication.”

He warned not to undermine the rights of women on the land. “If we receive any allegation in this regard then the government will take serious measures to protect women rights,” the Deputy Commissioner said.

The CDSP IV project started in March 2011 and is co-financed by the Government of Bangladesh, the Government of the Netherlands, and the International Fund for Agricultural Development (IFAD). The 89.2-million-dollar project has focused on the development of five new chars of Noakhali district and those adjacent to Meghna river. The chars are: Char Nangulia, Noler Char, Caring Char, Urir Char and Char Ziauddin. These encompass around 30,000 hectares of char land, with an estimated population of 155,000 persons in 28,000 households. 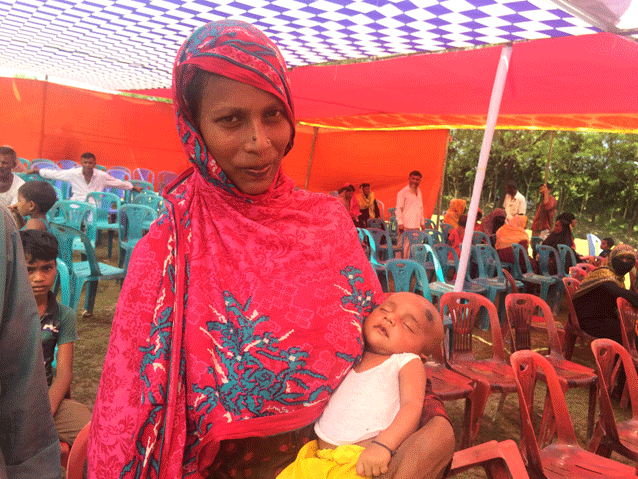 The local people said that in all respects CDSP IV is a blessing for them. Since 1994, when the project started, unrest in char lands has reduced and land grabbers have left the area.

The dispute over char lands in this area has gone on for more than half a century. It is government property and the landless people should have priority to get land allotments but this was not always upheld. Groups of land grabbers, power brokers and musclemen in collaboration with some local corrupt officials controlled the char lands illegally for decades.

Bazlul Karim, Deputy Leader of the CDSP IV, described how hard it was to settle the landless people, particularly to counter and free the land from grabbers and power brokers. He said, those people brought under permanent settlement have now risen above the poverty line.

“Nowadays, you will not find any really poor people within 300 square kilometers of the project areas. Because, in addition to land title, the beneficiaries are also receiving a package of support services including credit and healthcare facilities,” said Karim.

“The most challenging aspects were developing the char lands for habitat by constructing enclosures, embankment, culverts, sluice gates and roads to connect remote areas. It has also ensured pure drinking water to people by setting up hundreds of tubewells around the project area and helped prepare the land for cultivation. Now settlers are getting four times more crops than before. On the other hand, massive planting has been undertaken in the char lands. So, it has become real green fields to enjoy,” the deputy leader said. 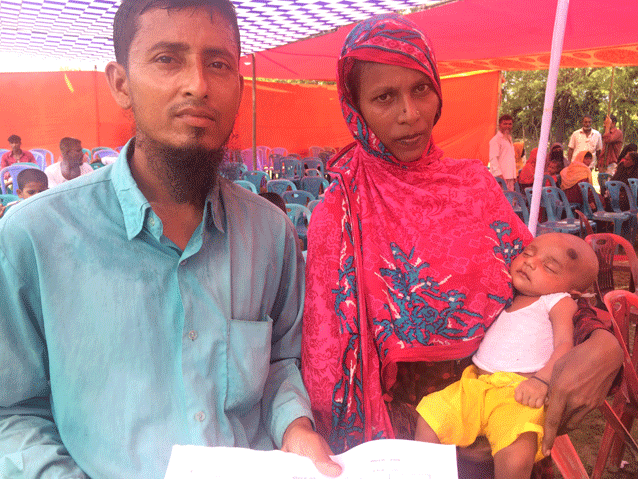 The Land Settlement Adviser of the project Md. Rezaul Karim said, “Since CDSP’s launch in 1994 all along it has been a tough job to settle the many issues around land titles. Anyway, we have successfully completed Phase I to III. Now Phase IV (CDSP IV) is ongoing, where IFAD came forward with huge support to carry out the activities of the project. This Phase has targeted distribution of land titles to 14,000 people by the year 2018. The progress is quite good. To date 11,538 families have received their land titles, so we have enough time to achieve the set target.”

The char lands are formed from sedimentation of the Meghan river. On an average annually 1.1 billion tons of sediment is carried down by the Ganges-Brahmaputra-Meghna (GBM) river system, the largest sediment load in any river system in the world. Much of it forms the raw mass for new developing land in the coastal areas, the ‘chars’, as it is known in Bangla language.

A study conducted by the Refugee and Migratory Movements Research Unit (RMMRU) said about 1 million people are directly affected by riverbank erosion each year and landlessness in these areas could be as high as 70 percent. Affected people are frequently forced to settle in more disaster-prone areas where displacement can occur several times. On an average each household studied was displaced 4.46 times.

This scenario is prevalent in the CDSP IV area. It is estimated that each year 26,000 people lose their land through Meghna river erosion. It has been observed that the river eroded families from the adjacent areas are migrating into the new char for shelter and livelihooda. The families are mostly from the other coastal chars and offshore islands who have lost their land due to erosion.