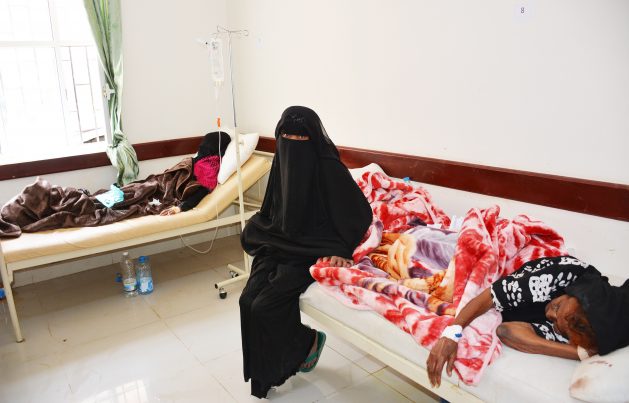 UNITED NATIONS, Nov 10 2017 (IPS) - If aid deliveries are not resumed, Yemen will experience the worst famine the world has seen in recent decades.

Earlier this week, Saudi Arabia closed all land, air, and sea ports in Yemen after Houthi rebels fired a missile at Riyadh.

Though the Saudi-led coalition reopened the southern port Aden, humanitarian officials have warned of a famine and health crisis if other entry points remain shut.

"If access shuts off entirely, even for a single week, then disaster will be the result. This is the nightmare scenario, and children will likely die." --Yemen Tamer Kirolos of Save the Children

Yemen has long depended on imports, importing up to 90 percent of essential goods.

A previous aerial and naval blockade, instituted days after the war began in 2015, has already left 20 million people in need of humanitarian assistance.

Due to limited funding, humanitarian agencies are only able to target one-third of the population while the other two-thirds rely on commercial imports.

If ports are not reopened, food supplies will be exhausted in six weeks.

“The humanitarian situation in Yemen is extremely fragile and any disruption in the pipeline of critical supplies such as food, fuel, and medicines has the potential to bring millions of people closer to starvation and death,” said 18 humanitarian organizations in a joint statement.

“The continued closure of borders will only bring additional hardship and deprivation with deadly consequences to an entire population suffering from a conflict that it is not of their own making,” they added.

Having recently visited Yemen, Lowcock told journalists of his encounter with seven-year-old Nora who weighed 11 kilograms, the average weight of a two-year-old.

In the Middle Eastern nation, approximately 2 million children younger than Nora are acutely malnourished and at risk of dying.

Save the Children’s country director for Yemen Tamer Kirolos, an organization which released the joint statement, warned of a disaster for children if aid is impeded.

“It’s already been tough enough to get help in…but if access shuts off entirely, even for a single week, then disaster will be the result. This is the nightmare scenario, and children will likely die,” Kirolos said.

The humanitarian community also warned that the current stock of vaccines in the country will last one month. If it is not restocked, there will be outbreaks of communicable diseases such as polio and measles which will particularly impact children under five and those suffering from malnutrition.

Already, there are over 800,000 cases of cholera, and children under five account for a quarter of all cases. Aid agencies expect that there will be more than one million cases, 600,000 of whom will be children, by the end of the year.

The spread of the outbreak, which is the largest and fastest-growing epidemic ever recorded, has been exacerbated by hunger and malnutrition.

However, the Red Cross reported that its shipment of chlorine tablets needed to combat the cholera epidemic had been blocked, worsening an already dire humanitarian situation.

“What kills people in famine is infections…because their bodies have consumed themselves, reducing totally the ability to fight off things which a healthy person can,” said Lowcock.

Lowcock also highlighted the need for the Saudi-led coalition to give clear assurance that there will be no disruption of air services, including the UN Humanitarian Air Service (UNHAS), and to scale back interference with all vessels that have passed inspection.

The aid agencies called on an end to the conflict, stating: “We reiterate that humanitarian aid is not the solution to Yemen’s humanitarian catastrophe. Only a peace process will halt the horrendous suffering of millions of innocent civilians.”

More than 10,000 have been killed and over 40,000 injured since the Yemen civil war began almost three years ago.