SUVA, Fiji, Dec 15 2017 (IPS) - Our strategies have failed us. We can no longer respond to the crises facing us in the same way. We have to be more radical, more creative — together — to build the future we want.

This was one of the resounding messages to emerge from a key global gathering of more than 700 leading thinkers, influencers and doers from more than 100 countries in Suva, Fiji in early December. 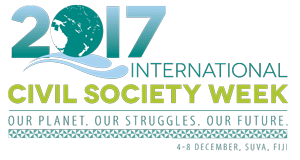 Organised by global civil society alliance, CIVICUS and the Pacific Islands Associations of Non-governmental Organisations (PIANGO) and including a diverse set of events by more than 40 partner organisations, International Civil Society Week 2017 brought to the world stage critical issues from the Pacific region such as the reality of climate change for small island states. This, whilst delegates made personal connections that we hope will translate into global solidarity.

We heard repeatedly about the transformational power of connecting across regions and thematic areas of work. Many said that the experience had changed them; they had a new understanding of the struggles of our brothers and sisters in the Pacific Islands. In short, we achieved what we set out to do.

But ICSW, organised under the theme, “Our Planet. Our Struggles. Our Future”, also brought home the gravity of our responsibility to act on this knowledge, to address the urgent, inter-related challenges threatening our planet and our humanity before it is too late.

The conversations that took place within the “Our Planet” programme track took us beyond the usual discourse on the Paris Climate Agreement and Sustainable Development Goals (SDGs). We heard about how an economic system built on greed and exploitation is creating unequal societies, perpetuating climate change and threatening livelihoods, food security and political stability.

But these are abstract concepts. It was the emotional and passionate accounts from Pacific Islanders whose homes, traditions, cultures and very identities are under threat that brought home the real and urgent nature of the challenge. Climate change is not some futuristic scenario depicted in a sci-fi film, it is happening right now with devastating consequences.

The “Our Struggles” programme track explored the extent of the global crisis of democracy and clampdown on people’s rights. We learned that more than half the world’s people live in countries where it is very difficult to exercise the freedoms of expression, association and peaceful assembly. This alarming and growing trend is limiting civil society participation and progress on social justice struggles from rising inequality to women’s rights.

The bright sparks of hope during the week were found in the “Our Future” track, which considered how we can innovate and support new leaders. We were reminded of the importance of giving young people the space and trust they need to drive this change.

We learned how to develop ‘sharing economies’ that build a sense of community where distrust prevails. We heard about the divestment campaign from fossil fuels that challenges the economic system propping up the extractive industry. Perhaps most importantly, we reconfirmed the need to build solidarity across diverse movements, mobilisations and initiatives.

It’s time to do things differently, to take on challenges collectively and in a holistic way. And if there’s one thing we hope ICSW 2017 delegates take home with them, it’s the willingness to stand together and take bold actions.

One concrete initiative that exemplifies this aspiration is the Declaration on Climate-Induced Displacement that was launched during the CIVICUS World Assembly on the final day of the conference. The Declaration was drafted by a cohort of global and Pacific Island organisations representing civil society, development actors, human rights defenders, faith-based organisations, environmental activists and progressive governments.

The intention is to build an influential, global movement in support of the inclusion of climate-induced displacement in the global compact for migration to be adopted by the United Nations General Assembly next year. If we succeed, it is because together, we are stronger.

This article is part of a series about the activists and communities of the Pacific who are responding to the effects of climate change. Leaders from climate and social justice movements from around the world met in Suva, Fiji, 4 December through 8 December for International Civil Society Week.