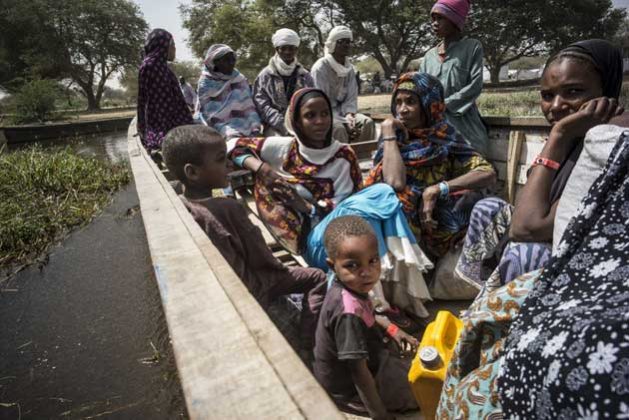 Nigerian refugees leave their camp in Ngouboua, on the coast of Lake Chad. Credit: UNHCR/Olivier Laban-Mattei

NEW YORK, Jan 5 2018 (IPS) - “Unity is the path. Our future depends on it,” said UN Secretary-General Antonio Guterres, as he issued an unequivocal global ‘Red Alert’ in his New Year message on December 31, 2017.

He listed the rise of nationalism and xenophobia foremost among many new dangers to global peace and stability – that included deepening conflicts, possible nuclear war, negative impact of climate change worsening at an ever-alarming rate, growing societal inequalities and appalling violations of human rights.

Underpinning his optimistic hope that the planet can be made more safe and secure, Guterres called for unity among the global community to tackle these overwhelming challenges, settle conflicts, overcome hatreds and defend values shared by all human beings.

On December 22, 2017 he launched the UN-OCHA Centre for Humanitarian Data (a major initiative of the Agenda for Humanity) in The Hague to provide humanitarian actors secure access to critical and sensitive information needed to make responsible, informed and timely decisions and interventions.

The Centre concentrates on four key areas: (a) data services; (b) data policy; (c) data literacy; (d) network engagement. Guterres noted that: “Accurate data is the lifeblood of good policy and decision-making. Obtaining it, and sharing it across hundreds of organizations, in the middle of a humanitarian emergency, is complicated and time-consuming – but it is absolutely crucial.”

Obtaining and sharing real time data to assist humanitarian action is critical, as are responsible media, research and scholarship. The Routledge Companion to Media and Humanitarian Action co-edited by me and Professor Robin Andersen (published September 2017) focuses on the nexus between media and humanitarian action, and delves deep into some of the manifold contexts of these unprecedented humanitarian crises – where representations of global disasters are increasingly common media themes globally.

The Preface to this timely volume is written by Sir Peter Sutherland, UN Special Representative of the Secretary-General for International Migration (January 2006 to March 2017) on combating the scourge of human trafficking and forced migration – with more than 240 million migrants every year and almost 20 million people forced from their countries by conflicts and disasters.

Not since the Second World War, have so many people fled their homes to escape persecution, conflict, generalized violence and human rights violations.

UNHCR’s report on global trends in forced displacement estimated that by the end of 2016, 65.6 million individuals would be forcibly displaced worldwide, including 40.3 million people uprooted within the borders of their own countries; 2.8 million seeking asylum; and 22.5 million people seeking safety across international borders as refugees.

UNHCR also estimated that in 2016 there were 10.3 million people newly displaced by conflict or persecution, with an average of 20 people driven from their homes every minute, or one every three seconds.

The International Organization for Migration (IOM) notes that 49,310 migrants and refugees entered Europe by sea in 2017 through 7 May, with the vast majority arriving in Italy and the rest in Greece, Cyprus and Spain. More than 1,200 people lost their lives while attempting to cross the Mediterranean Sea.

According to the European Borders and Coast Guard Agency (Frontex), the majority of refugees and migrants now “irregularly residing” in Europe, fled their homes because their lives were at risk. In many cases, they may have escaped situations where they were at risk of atrocity crimes or where these crimes were ongoing.

The Routledge Companion to Media and Humanitarian Action was launched at the UN Bookshop, hosted by UN-DPI, and moderated by Assistant Secretary-General Maher Nasser – where the two coeditors and fellow chapter contributor Under-Secretary-General Adama Dieng (Special Adviser to the Secretary-General on the Prevention of Genocide) addressed attendees with support from other chapter contributors who were present during the proceedings, which were broadcast online by UN Publications:
https://www.facebook.com/unpublications/videos/10155083991629599/?hc_ref=ARQtBNC2DhBOWdd_VuSd9cM5yeQyHLOy56ZI_aAU7w3nA_3gbKoFe1E4W589-nMNUs0

The contributors to the volume include media professionals, international development cooperation specialists, emergency medical experts and humanitarian actors, many working for the UN, some at the highest echelons – providing privileged access and insights to the inner-workings of the Security Council and other key decision making bodies and organs of that august institution.

Responsible journalism, detailed research and scholarship on critical subject matter dealing with media and humanitarian action has never been at a greater premium than in the current geopolitical climate – where facts appear to have a diminished value, and anti-intellectualism and fake news is on the rise – to the detriment of humanitarian laws and basic freedoms.

The Routledge Companion to Media and Humanitarian Action contributes to existing data and knowledge necessary to inform politicians, policymakers, media professionals and humanitarian actors across the globe, and thereby to the work of the Centre for Humanitarian Data.

Unity has never been at a greater premium in these dystopian times, where extrajudicial (e.g. Myanmar, Russia, Venezuela), anti-humanitarian (e.g. Yemen, Syria, Eritrea), nationalist and xenophobic (e.g. USA, Austria, Hungary) policies are being enacted and implemented by would-be-dictators, autocrats and rightwing populists – harking back to darker times like during the pre-World War Two era.

In contrast, Secretary-General Guterres has urged leaders everywhere to resolve in the New Year: “Narrow the gaps. Bridge the divides. Rebuild trust by bringing people together around common goals.”