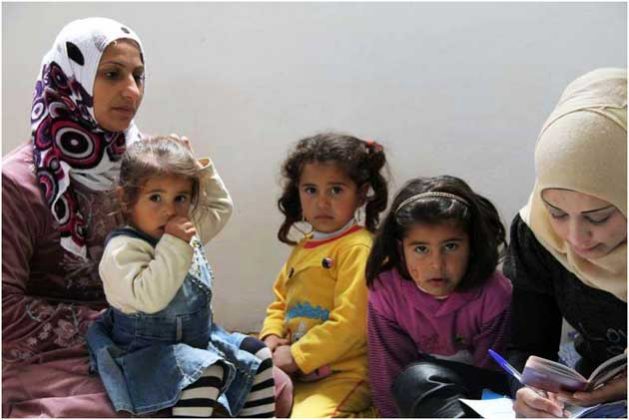 Since the conflict erupted in March 2011, Syria has witnessed unprecedented devastation and displacement. More than 5 million Syrians have fled the country and 6 million are internally displaced. With more than 13 million people in need of assistance, the conflict has caused untold suffering for Syrian men, women and children. Credit UN photo

NEW YORK, Mar 28 2018 (IPS) - US Defense Secretary James Mattis dropped a political bombshell last week when he said the U.S. has no evidence to confirm reports that the Syrian government had used the deadly chemical sarin on its citizens.

Arguing half-heartedly that he was not rebutting the reports, Mattis told a Pentagon news briefing Friday: “We have other reports from the battlefield from people who claim it’s been used. We do not have evidence of it.”

The statement by Mattis made a virtual mockery of a rash of presidential statements and proposed resolutions by the UN Security Council which has routinely accused the Syrian government of continuing to use chemical weapons on civilians, which President Bashar al-Assad had denied.

Nor has the Organization for the Prohibition of Chemical Weapons (OPCW) made any irrefutable claims on chemical weapons use.

Still, in April, the United States fired 59 Tomahawk cruise missiles at Syria in response to what it said it believed was a chemical weapons attack that killed more than 100 people.

Last month, the Reuters news agency reported that French President Emmanuel Macron warned that “France will strike” if chemical weapons are used against civilians in the Syrian conflict in violation of international treaties, but that he had not yet seen proof this was the case.

Meanwhile, at the 37th session of the Human Rights Council, the UK mission in Geneva accused the Syrian government of using chemical weapons in Eastern Ghouta.

And Western diplomats proclaim that Syrian authorities should not be referred to as a “government” but as a “regime“ even though there is no official listing of such member-states—either as “governments” or “regimes,” any more than procedures for officially demoting a member-state from the 1st to the 2nd grade status.

In the current international scenario, the far right seems to have all the access it needs – specifically in the Western media—to advocate its cause. But regrettably, there are those whose voices are silenced, and who say that the gravity of crimes is not necessarily related to the quantity of decibels they generate on the battlefield or in the mainstream TV channels.

Take for instance two hospitals in Syria: one is bombed and destroyed, human shields or no human shields. A war crime indeed.

Another stands proudly on the horizon but its activity is paralysed by unilateral coercive sanctions: blockage of supply of spare parts make it impossible to get the theatre to operate gravely wounded people; prostheses are no longer available for amputees; electrical supply breaks down because of ban on imports of generators; water is polluted for lack of imported filters and people die in the hospital from water-borne ailments; and no medicines are available for the dying or gravely ill.

Even in the streets, people die or fall gravely ill because of the rocketing prices of basic food stuffs due to the sanctions. But everyone is told this situation is created by bad governance. Or that the Government is preventing access. This may be the case sometimes, especially if fighters can’t be separated from civilians.

The civilized world anticipated it all and the sanctions are benevolent for the civilian population because all accept the “humanitarian exception”. No one of course mentions that the SWIFT international fund transfer system has been blocked preventing Syria from importing these humanitarian supplies or indeed anything else, imposing on it a comprehensive stranglehold, as was the case previously in Iraq.

And chemical weapons of Syria today are reminiscent of the non-existent Iraqi weapons of mass destruction of yesteryear. Are all these wanton deaths not also war crimes?. We are told to believe they are not.

All wars are won in the media and through propaganda, as well as on the battlefield. This is the case also for Syria. The fact is Syria is finally winning the war on the battlefield to regain control over its own territory. As they disentangle the enemy fighters from the civilians, tens of thousands of the latter are taking refuge with the protection of the government.

So the scenario is collapsing. The only possibility of counter-attack that is left is through mobilizing, in the real sense of the word, the media. The fig leaf is human rights which are being violated by all combatants (have you ever heard of squeaky-clean snow white war in human history?) but also by those that are supplying heavy weapons to groups that they heretofore listed as terrorists.

The indictment justifying this? Human rights violation by the other side while the accuser merrily continues imposing his stranglehold on the civilian population for which he “weeps” The crime committed by the winners on the battlefield is to have called into question the geo-strategic objectives of others which the latter believed was within their reach a few years ago.

But the architects of this strategy may take advantage of this change of reality as compared to their expectations to pause and think. Those fighting in the Ghouta against the government are not democratic forces but the reincarnation of those terror groups of El Qaeda and ISIS and no one else. Crocodile tears about these “freedom fighters” seem indeed out of place when they are listed as terrorist organizations in the very countries that now cry for them.

Remember September 11? Would the strategists really want to replicate in Syria the Libyan experience or do they not fear that a new Karzai in Damascus would be disastrous in terms of reinvigorating those very terrorist groups the world has just succeeded in eradicating in Iraq and Syria?