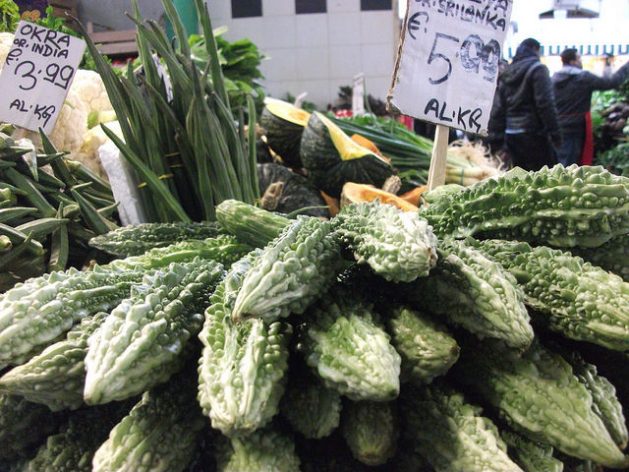 Bitter gourds, or “ampalayas” are difficult to find in Italy, but easy to find in the Esquilino market in Rome. In Italy, over 400,000 agricultural labourers risk being illegally employed by mafia-like organisations, and more than 132,000 work in extremely vulnerable conditions. Credit: Maged Srour/IPS

The report, released this July by the Italian trade union for farmers, Flai Cgil, and the research institute Osservatorio Placido Rizzotto, sheds light on a bitter reality that is defined by the report itself as “modern day slavery”. The criminal industry is estimated to generate almost five billion euros.

"We must rebuild the culture of respect for people, including migrants. These are people who bend their backs to collect the food we eat and who move our economy." -- Susanna Camusso, secretary general of CGIL

“The phenomenon of ‘Caporalato’ is a cancer for the entire community,” Roberto Iovino from Osservatorio Placido Rizzotto, told IPS. “Legal and illegal activities often intertwine in the agro-food sector and it ultimately becomes very difficult to know who is operating in the law and who is not.”

The criminal structure is called Caporalato or Agromafia when it touches a number of aspects of the agri-food chain. It is administered by ‘Caporali’, who decide on working hours and salaries of workers. The phenomenon is widespread across Italy. From Sicilian tomatoes, to the green salads from the province of Brescia, to the grape harvest used for producing the ‘Franciacorta’ sparkling wine in Lombardia, to the strawberries harvested in the region of Basilicata—many of these crops would have been harvested by illegally-employed workers, according to the report.

The average wages of the exploited, warns the report, range between 20 and 30 euros per day, at an hourly rate of between three to four euros. Many reportedly work between eight to 14 hours per day, seven days a week. The majority of the collected testimonies show that many workers are paid less than their actual time worked and their salaries are 50 percent lower than the one outlined by the national contract for farmers.

In some areas like Puglia or Campania in southern Italy, most salaries are paid on a piecework basis or per task. 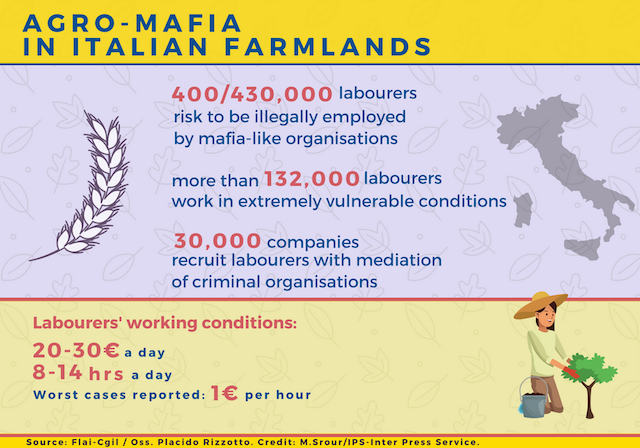 Some workers reported to Flai-Cgil that they were paid only one euro per hour and that they had to pay 1.5 euros for a small bottle of water, five euros for the transportation to reach the field and three euros for a sandwich at lunchtime each day. Day labourers are also required to pay between 100 to 200 euros for rent, often in abandoned, crumbling facilities or in remote and less-frequented hotels.

The money was paid to the ‘Caporale’ or supervisor.

According to the report, a ‘Caporale’ earns between 10 to 15 euros a day per labourer under their management, with each managing between 3,000 to 4,000 agricultural workers. It is estimated that their average monthly profit fluctuates between tens to hundreds of thousands of euros per month, depending on their position in the pyramid structure of the illegal business. It is alleged in the report that no tax is paid on the profits and this costs the state in lost income and also impacts on companies operating within the law.

“Those people [‘Caporali’] are not naive at all,” one of the workers told the trade union’s researchers. “They know the laws, they find ways of counterfeiting work contracts and mechanisms to [circumvent] the National Social Security Institute.” The institute is the largest social security and welfare institute in Italy.

“They have a certain criminal profile,” the worker explained.

The ‘Caporali’ are not just Italians but Romanians, Bulgarians, Moroccans and Pakistanis, who manage their own criminal and recruiting organisations. The report warns that recruitment not only takes place in Italy but also in the home countries of migrants like Morocco or Pakistan.

In 2017, out of one million labourers, 286,940 were migrants. It is also estimated that there are an additional 220,000 foreigners who are not registered.

African migrants also reportedly receive a lower remuneration than that paid to workers of other nationalities.

These victims of Agromafia live in a continuous state of vulnerability, unable to claim their rights. The report points out that some workers have had their documents confiscated by ‘Caporali’ for the ultimate purpose of trapping the labourers. It also highlights the testimonies of abuse, ranging from physical violence, rape and intimidation. One Afghan migrant who asked to be paid after months without receiving any pay, said that he had been beaten up because of his protests.

The report also estimates that 5,000 Romanian women live in segregation in the Sicilian countryside, often with only their children. Because of their isolation many suffer sexual violence from farmers.

Luana told Flai-Cgil of her abuse. “He offered to accompany my children to school, which was very far to reach on foot,” she said. “If I did not consent to this requests, he threatened not to accompany them any more and even to deny us drinking water.”

“We have to put humanity first, and then profit”

Many of the victims hesitate to report their exploiters because they are fearful of losing their jobs. A Ghanaian boy working in Tuscany told Flai-Cgil that Italians have explained to him how to lay a complaint, but he holds back because he still has to send money to his family.

During the report release Susanna Camusso, secretary general of the country’s largest trade union, CGIL, said: “We must rebuild the culture of respect for people, including migrants. These are people who bend their backs to collect the food we eat and who move our economy.

“We must help these people to overcome fear, explaining to them that there is not only the monetary aspect to work. A person could be exploited even if he holds a decent salary. We have to put humanity first, and then profit .”