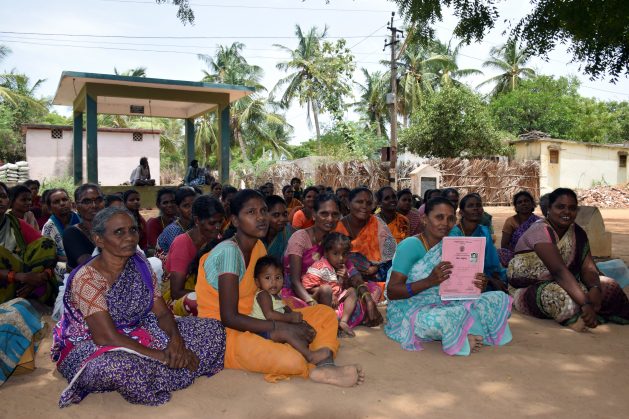 The women of Macharawari Pallem, a village of the Yanadi indigenous people located some three hours from Chennai city in South India, finally re-claimed their land after being award it over two decades ago and losing it to landlords and village elites. Credit: Stella Paul/IPS

NELLORE DISTRICT, India, Aug 7 2018 (IPS) - Under the blazing midday sun, a tractor moves slowly along a dirt trail in Nacharwari Pallem, a village of the Yanadi indigenous people located some three hours from Chennai city in South India. Atop the tractor, women of the village – 36 in all – sit expectantly, ignoring the heat. Squeals of excitement fill the air as the tractor slowly halts near a stretch of rice fields.

The women scramble to get down and make a beeline to the nearest rice field, a pink piece of paper tightly held in each of their hands. This is the official document that declares ownership of a plot of land.

Once at the rice field, the women stand in a circle and in a ritual-like manner, clap and break into laughter. The moment is historic: after the struggle of a lifetime, the  Yanadis finally have rights to the land that they have cultivated for generations.

Yanadi – a tale of poverty and oppression

There are roughly three million Yanadis in India today, spread over four districts in Andhra Pradesh state, and divided into four clans. The Reddy or ‘Good’ Yanadis have always worked for the Reddy’s or the rich men of the villages, while the Challa Yanadis had menial jobs only, which included scavenging. In return for their work they were paid only with leftover food–a clear indication of their exploitation.

“There are so many odds, but for my people, standing together can be the best way to overcome them all." -- Gandala Sriramalu, Yanadi village elder.

The Kappalla Yanadi who catch fish and also often frogs, make up the third clan. And finally, there are the Adavi Yanadi, who live in the forests as hunter gatherers.

While the clans live in different areas and traditionally take on different types of work, what is common among all four is the cycle of utter poverty and deprivation that they have been subjected to.

At least 60 percent of Yanadi do not own a home and live in makeshift thatched huts, with the majority labouring hard in other people’s homes as domestic workers or on farms as labourers for little or no wages.

Only 14 percent of Yanadis are literate despite the fact that Andhra Pradesh state has an average literacy rate of 67 percent.

And despite the large size of their population, this group of indigenous people still have no political representative in either the National Parliament or the Assembly (the provisional legislature). In addition, save barely two to three percent, the entire people are landless.

Much of their current condition is a result of their semi-nomadic lifestyle, says Sheikh Basheer who heads the Association for the Rural Development (ARD), a non-governmental organisation that has been working for the rights and welfare of the Yanadis for nearly 30 years.

These indigenous people initially lived in the forests and near small waterbodies like rivers, streams and ponds, catching fish and small animals. However, as resources dried up slowly, they moved away from this type of life and had to begin working as manual labourers to survive. But while they worked for people in villages, they continued to live in their isolated huts, and unlike their village counterparts they did not own land or settle down to a more organised village life. As a result, they were left out of village affairs, and became seen as pariahs who lived in isolation.

But most damaging to the Yanadis and their way of life has been their bondage–a form of slavery where the village elites who employed the Yanadis also decided their present and their future. “The Reddy’s [elites] employed the whole family as one labour unit. This means only one person was paid—not with cash, but in food grains—while the entire family, including the children, worked hard,” Basheer tells IPS.

“Above all, the employment would continue for generations and the family could not leave until the employer let them go. So, these people have lived in silence with no knowledge of their rights,” Basheer, who has helped free over 700 Yanadis from slavery, says.

Gandala Sriramalu is a community elder who is one of the lucky few to have received an education and been employed in government job. Now retired, Sriramalu spends his time visiting his community and making them aware of their rights as well as the opportunities available to them, including free education for their children.

The problem, he tells IPS, is that the Yanadis have never learnt to think or act on their own. So, when aid is given from the government and other agencies like NGOs, they are unable to make use of the opportunities.

The ownership of land is one such issue. For the past two decades, the government has been distributing land rights to the Yanadis. But, it is extremely rare to see a community member actually utilising the land. In most cases it is his employer who enjoys the landrights.

“The employer uses the Yanadi as a puppet, cultivating the land and consuming the produce. The Yanadi does not speak because he is either scared of losing his job or of being beaten up,” Sriramalu explains. 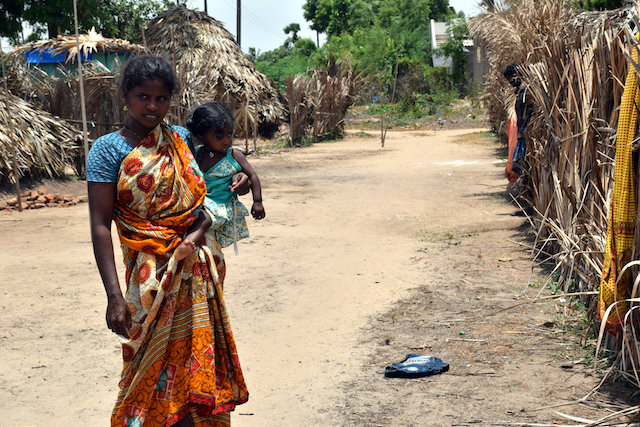 There are roughly three million Yanadis in India today, spread over four districts in Andhra Pradesh state, and divided into four clans. Many still live in abject poverty in makeshift thatched huts, with the majority labouring hard in other people’s homes as domestic workers or on farms as labourers for little or no wages. Credit: Stella Paul/IPS

The case of Nacharwari Pallem is an example of this. Here, each of the Yanadi families received rights to half an acre of land about 20 years ago when the government assigned it to them through the Integrated Tribal Development Agency (ITDA), a special agency mandated to work for indigenous peoples.

However, while the Yanadis had ownership of the land here, it was in truth firmly under the control of a village elite. It took five years for ARD to convince the Yanadis to claim back their land rights and to assure them they need not fear any consequences from the village as the law was on their side.

Chinni Hemalatha, 32, tells IPS that her family waited several years for their land even after initially receiving formal ownership sometime back.

“It’s only last year that we finally got access to our land. When the rains come [in January], I am going to sow rice,” she says with a smile.

Malli Pramila, another Yanadi woman, is yet to obtain her ownership rights. But seeing others get theirs has excited her.

“I am so happy it is happening in our community at last,” she tells IPS.

Challenges before the government

Kamala Kumari is the joint collector in Nellore and a senior government official. Known for her clean image, Kumari was earlier a project officer at the ITDA and is known to have a high level of awareness on the issues facing indigenous peoples, including the Yanadis.

In an interview with IPS, she says that the government has a host of welfare schemes for the Yanadis that aims to provide them with housing, education and a livelihood.

However, she also admits that changes are extremely slow to come into effect. “There are so many challenges. The biggest one is a lack of sufficient funds. Last year, we had 6.5 million rupees [USD94,500] which was grossly inadequate for such a large population. This year, I have asked for two billion rupees [USD29 million], but we have to see how much of it is actually cleared.”

The Yanadis way of living in isolated pockets and a lack of community representatives who can speak on behalf of their community also poses a challenge, she says.

Self-help is the way forward

Unaware of the challenges of government officials, the Yanadis are taking small steps to claim their rights.

In dozens of villages in Nellore—one of the four districts where the Yanadis are a majority—these indigenous people have begun joining Yanadai Samakhya, a network created by Sriramal with the help of ARD.

Currently, there are about 12,000 members in the network which looks into all the major issues faced by the Yanadis, with landrights, education, bondage and unpaid labour being some of them.

Together, they have been winning small battles, including the right to use the mineral resources on their property.

Ankaiya Rao of Reddy Gunta village, has been mining quartz stone since March, when his village first received rights to mine 159 acres of land that is rich in quartz deposit.

Rao, who owns three acres, has been selling the stone to traders.

The father of two now dreams of giving his children a better childhood than his own. A few others in the village have also joined him in the mining of quartz, though on a smaller scale.

However, there remains the constant fear of falling back into the trap of exploitation and losing the rights to a landlord, admits Basheer who had been instrumental in getting Reddy Gunta village its rights to mine quartz.

“A number of powerful and politically-connected people are eyeing this land now and anyone could lure or intimidate a villager to sell his plot for a small bundle of cash. Once that happens, the entire community will eventually lose as landgrab is a common occurrence here,” he cautions.

The answer is to stand united and vigilant against any possible landgrab efforts, says Sriramalu.

“There are so many odds, but for my people, standing together can be the best way to overcome them all.”