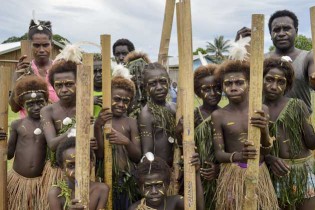 By Jamison Ervin
Indigenous peoples, who comprise less than five percent of the world’s population, have the world’s smallest carbon footprint, and are the least responsible for our climate crisis. Yet because their livelihoods and wellbeing are intimately bound with intact ecosystems, indigenous peoples disproportionately face the brunt of climate change, which is fast becoming a leading driver of human displacement.

States Must Act Now to Protect Indigenous Peoples During Migration

By Stella Paul
Under the blazing midday sun, a tractor moves slowly along a dirt trail in Nacharwari Pallem, a village of the Yanadi indigenous people located some three hours from Chennai city in South India. Atop the tractor, women of the village – 36 in all – sit expectantly, ignoring the heat. Squeals of excitement fill the air as the tractor slowly halts near a stretch of rice fields.

By Manipadma Jena
“Showing them a picture-book crow, I intone ‘kaak’ in Bengali, the State language. While others repeat in chorus, the tribal Santhali first-graders respond with a blank look. They know the crow only as ‘koyo’. They’ll happily roll out glass marbles to count but ask them how many they counted, they remain silent because in their mother tongue, one is mit, two is bariah - very different sounding from the Bengali ek and du.”

By Aruna Dutt
As the International Day of the World's Indigenous Peoples approaches on Sunday, Aug. 9, concerns are growing that they will not fully benefit from the newly drafted Sustainable Development Goals (SDGs).
ADVERTISEMENT ADVERTISEMENT