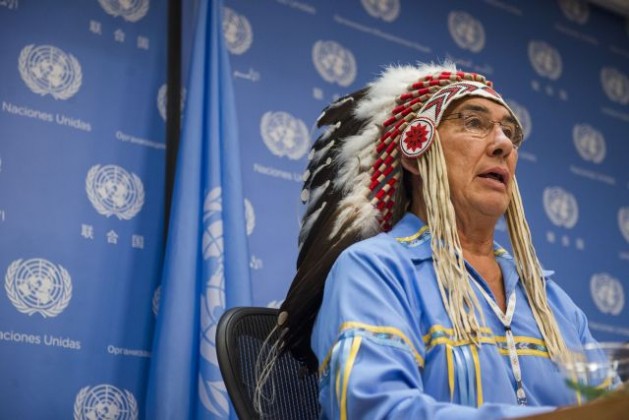 Chief Wilton Littlechild, Advisor to the Secretariat of the UN Permanent Forum on Indigenous Issues (UNPFII), addresses a press conference on the World Conference on Indigenous Peoples in September 2014. Credit: UN Photo/Amanda Voisard

UNITED NATIONS, Aug 6 2015 (IPS) - As the International Day of the World’s Indigenous Peoples approaches on Sunday, Aug. 9, concerns are growing that they will not fully benefit from the newly drafted Sustainable Development Goals (SDGs).

In a policy brief on the SDGs and the Post-2015 Agenda, the Indigenous Peoples Major Group said that there was a failure to recognise indigenous peoples as distinct groups under the expiring Millennium Development Goals (MDGs), which resulted in the absence of targeted measures to address their specific situations related to poverty and severely limited favorable outcomes.

"Disadvantages faced by indigenous peoples are related to dispossession and exacerbated by powerlessness and poverty." -- Roberto Mukaro Borrero

They added that there was also culturally-blind implementation of the MDGs resulting in “inappropriate development programmes for indigenous peoples including discriminatory actions related to education, health and basic services.”

There are an estimated 370 million indigenous peoples living in more than 70 countries. They continue to be among the world’s most marginalised population groups, according to the WHO. The need for more participation and inclusion of Indigenous communities and their perspectives is one of the main purposes of the international day.

The health status of indigenous communities varies significantly from that of non-indigenous population groups in countries all over the world, which is one reason why health is the main theme of this year’s International Day of the World’s Indigenous Peoples.

“The focus of this international day is to analyse how indigenous people have access to health services, what are the causes of exclusion, and how we can contribute to reduce those gaps existing in child and maternal health, nutrition, communicable diseases, etc.,” says del Pino.

“Children born into indigenous families often live in remote areas where governments do not invest in basic social services such as health care, quality education, justice and participation, and indigenous peoples are at particular risk of not being registered at birth and of being denied identity documents.”

Health is defined in WHO’s Constitution as “a state of complete physical, mental and social well-being and not merely the absence of disease or infirmity”, which is similar to the values behind traditional healing systems in Indigenous communities. According to WHO estimates, at least 80 percent of the population in developing countries relies on these traditional healing systems as their primary source of care.

“Many factors have an impact on indigenous populations’ health, including geographic barriers, language, and lack of education,” Del Pino told IPS.

“However, of all the barriers faced by indigenous peoples, it is perhaps the cultural barriers that present the most complicated challenge. This is because there is little understanding of the social and cultural factors deriving from the knowledge, attitudes, and practices in health of the indigenous peoples.”

Roberto Mukaro Borrero, an indigenous Taino leader and representative of the International Indian Treaty Council and the United Confederation of Taino People, told IPS that in order  to create more understanding, there needs to be an increased focus on cooperative and informed partnership building among traditional healers, non-traditional health professionals, health service agencies, organisations, and communities.

“These partnerships should recognise the clear relationship between the social disadvantages experienced by Indigenous Peoples and their current status of health,” Borrero said. “Disadvantages faced by indigenous peoples are related to dispossession and exacerbated by powerlessness and poverty.”

“Governments must implement the commitments made to indigenous peoples within international agreements such as the Declaration on the Rights of Indigenous Peoples and the World Conference on Indigenous Peoples, among others,” said Borrero.

“These agreements were developed to improve the well-being of indigenous peoples around the world; however, political will including adequate resource allocation is a pre-requisite to success.”

Climate change and environmental hazards also have a disproportionate impact on the health of indigenous peoples.

“In many cases indigenous communities are more exposed to these disasters because they live in most vulnerable and isolated areas,” Del Pino said.

“Another cause of Indigenous peoples being among the first to face the direct consequences of climate change is their dependence upon and close relationship with the environment and its resources. For example, in the Amazon, the effects of climate change include deforestation and forest fragmentation, and consequently, more carbon released into the atmosphere, exacerbating and creating further changes.”

She added, “Droughts in 2005 resulted in fires in the western Amazon region. This is likely to occur again as rainforest is replaced by savannas, thus having a huge effect on the livelihoods of the Indigenous peoples in the region. Climate change exacerbates the difficulties already faced by vulnerable indigenous communities.”

“The inclusion of target 17.18 of the SDGs –  to improve the quality, coverage and availability of disaggregated data –  is in response to one of the lessons commonly drawn from the MDGs: the need for the SDGs to make visible the most vulnerable populations,” Del Pino said.

It is an essential component to meet the objective of “no one should be left behind” and “no target should be met, unless met for all groups” in the new post-2015 agenda, she said.