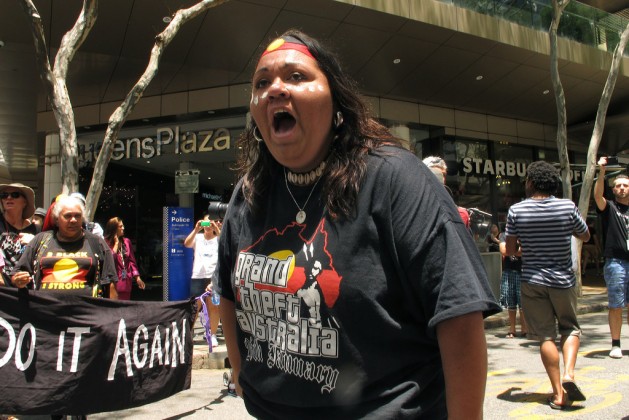 An Aboriginal activist shouts slogans during a march in Brisbane, Australia, to stop the cycle of ‘stolen generations’ of Aboriginal children. Credit: Silvia Boarini/IPS

BRISBANE, May 30 2015 (IPS) - Every year since 1998, Australia has marked ‘National Sorry Day’ on May 26, a day to remember the tens of thousands of indigenous children who, between the 1890s and 1970s, were forcibly removed from their communities by government authorities and placed into the care of white families or institutions to be assimilated into settler society.

‘National Sorry Day’ was set up following publication in 1997 of the ‘Bringing Them Home’ report, the result of the first national inquiry which collected testimonies of ‘stolen’ Aboriginal and Torres Strait Islander children and criticised the racist policies that allowed their systematic separation from their families.

The report played a central role in highlighting the plight of the so-called ‘stolen generations’ but it took a further 11 years until the government formally apologised for this ‘blemished chapter’ in Australia’s history. Only in 2008 did then Labour Prime Minister Kevin Rudd take the unprecedented step.

“If you listen to someone from the older age group of stolen generations and the younger ones, the essence of what they say is the same. They never met mother, they never met grandma. They feel they don’t belong anywhere. How they feel inside is the same” - Auntie Hazel, founding member of Grandmothers Against Removals (GMAR)

“For the pain, suffering and hurt of these Stolen Generations (…) we say sorry,” he said on that occasion, before going on to envision a future in which “Parliament resolves that the injustices of the past must never, never happen again.”

Despite the apology, indigenous activists maintain that the ‘stolen generations’ is hardly an isolated chapter, let alone a closed one. “From the first few weeks of the invasion in the 1780s, they started removing our children and breaking down our families,” Sam Watson, a prominent Aboriginal leader and activist, told IPS. “And there are more children being removed now than ever before,” he added.

A recent report by the Government Productivity Commission, titled ‘Overcoming Indigenous Disadvantage’, corroborates Watson’s interpretation. Indigenous children in out-of-home-care numbered 5,059 in June 2004 and 14,991 in June 2014. Barely five percent of the population under 17 is indigenous and yet, the report shows, 35 percent of all children removed are Aboriginal and Strait Islanders.

Mary Moore is founder of the Legislative Ethics Commission and has followed many cases of indigenous and non-indigenous child removal. She calls Australia the ‘child-stealing capital of the world’.

Many jobs depend on this ingrained practice and laws are passed to legitimise it, she says. “Removal and adoption are counter-intuitive strategies,” she told IPS. “They ignore the damaging lifelong consequences on children and they are far more costly than supporting families to remain united.”

Authorities justify removals in the name of ‘child protection’ and point to a context of ‘neglect’ and possible ‘risk’ as justifying factors. But the Aboriginal and Torres Strait Islander minority, overly represented at the bottom of most socio-economic indices, wants to know whose ‘neglect’ and racist policies have contributed to the widespread poverty, soaring incarceration numbers or high mental illness rates affecting their communities.

Although federal government talks of “closing the gap in indigenous disadvantage”, critics say that, often enough, in order to end ongoing state of neglect of Aboriginal communities, the only gap to bridge is between government’s promises and its actions.

In February 2015, at a speech marking the anniversary of the 2008 national apology, former Prime Minister Rudd, while not ignoring the staggering 400 percent increase in removal of indigenous children since 1998, called the crisis a “new type of stolen generation” rather than an unresolved and continuing crisis.

For Auntie Hazel, a founding member of the grassroots pressure group Grandmothers Against Removals (GMAR), there is no difference between what happened then and what happens now. “If you listen to someone from the older age group of stolen generations and the younger ones, the essence of what they say is the same,” she told IPS.

“They never met mother, they never met grandma. They feel they don’t belong anywhere. How they feel inside is the same,” she said.

GMAR was founded in New South Wales (NWS) in January 2014. NSW has the worst track record in child removals explains Auntie Hazel and GMAR was a way to say “enough is enough”. Just a year later, it had grown into a nationwide movement made up of self-organising charters throughout Australia’s affected communities.

The National Aboriginal Strategic Alliance to Bring the Children Home (NASA) now brings together GMAR and other like-minded groups. Protests, round-tables, marches and sit-ins have taken place across Australia and an international solidarity network is growing rapidly.

“We are all one and fighting for the same thing,” said Auntie Hazel. “It’s only when the little ones can nurture their spirit inside that they can become proud Aboriginal people.”

Ultimately, GMAR seeks to achieve self-determination in the care and protection of indigenous children and end the “power and control” that governments hold over the indigenous minority.

At the moment, many in the community complain, children are taken away with worrying ease, sometimes on the basis of unfounded and unchecked hearsay.

Anyone, Auntie Hazel explained, can call a hotline anonymously and say things about you. “Then maybe one day your child spends the lunch money on sweets so the teacher, a mandatory reporter, tells the Department of Community and Social Services (DOCS) that the child had no money for food. And so on until there is a case against you and you just don’t know.”

One of GMAR’s proposals to end this cycle is the establishment of an ‘Aboriginal expert committee’. Made up of health specialists, the committee will work with families deemed “at risk” by the DOCS before the children are removed.

Such a committee would have spared Albert Hartnett, one of GMAR’s male members, much anguish. In 2012 his 18-month-old daughter Stella was removed without warning. “DOCS officials escorted by police officers knocked on my door one Friday morning,” he recalls, still emotionally shaken.

“They said the child was at risk. They asked me ‘where is the dog?’ but I couldn’t understand what they were talking about. We had no dog.” Although DOCS did not find any of the “risks” mentioned in their documents, such as dog excrement on the floor, they still took the child.

Friday removals are a practice being fought by GMAR because it puts DOCS at an advantage by leaving families without support for a whole weekend. “They tell you ‘you are an unsuitable parent’ and it is easy to fall into a downward spiral,” Hartnett said.

With no faith in the system, Hartnett attended the consultations the following Monday and in the evening received a surprise phone call from DOCS asking to assess his home. “It happened backwards,” the father of five told IPS. “First they took the child and then they came to assess.” The child was restored to the family but everyone, said Hartnett, has remained scarred by the experience.

“After the [2008] apology,” Auntie Hazel told IPS, “our community felt disempowered. We were suffering in silence.”

The truth was out about removals and instead “government stigmatised us,” Hartnett told IPS, referring to the 2007 Northern Territory Intervention when, citing unfounded allegations of child abuse, federal government seized control of a number of indigenous communities.

Olivia Nigro, a social justice campaigner and researcher for GMAR told IPS that in this context, what GMAR has achieved is mobilisation from within. “GMAR has galvanised families in affected communities. It has really generated the political confidence to talk about this issue and demand redress for the people.”