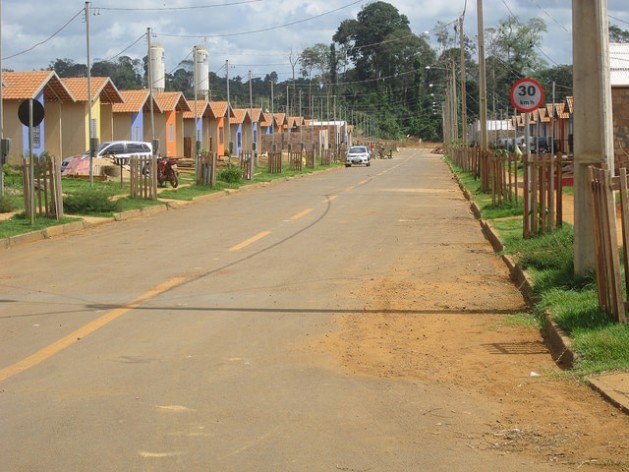 A street in the Jatobá neighbourhood, the first of the five settlements built by the company Norte Energía to resettle families displaced from the city of Altamira by the Belo Monte hydroelectric dam in the northern state of Pará in Brazil’s Amazon rainforest. Credit: Mario Osava/IPS

ALTAMIRA, Brazil, Jul 31 2015 (IPS) - Paulo de Oliveira drives a taxi in the northern Brazilian city of Altamira, but only when he is out of work in what he considers his true profession: operator of heavy vehicles like trucks, mixers or tractor loaders.

For the past few months he has been driving a friend’s taxi at night, while waiting for a job on the construction site of the Belo Monte dam – a giant hydroelectric plant on the Xingú river in the Amazon rainforest which has given rise to sharply divided opinions in Brazil.

Oliveira, whose small stature contrasts with the enormous vehicles he drives, has lived in many different parts of the Amazon jungle. “I started in the Air Force, a civilian among military personnel, building airports, barracks and roads in Itaituba, Jacareacanga, Oriximiná, Humaitá and other municipalities,” he told IPS.

His sister’s death in a traffic accident brought him back to Altamira, where he became a garimpeiro or informal miner. “I was buried once in a tunnel 10 metres below ground,” he said.

He survived this and other risks and earned a lot of money mining gold and ferrying miners – who paid him a fortune – in a taxi back and forth from the city to the illegal mine. “But I spent it all on women,” he confessed.

He then moved to Manaus, the Amazon region’s capital of two million people, to work on the construction of the monumental bridge over the Negro river. After that he headed to Porto Velho, near the border with Bolivia. But he had a feeling that something would go wrong at the Jirau hydropower construction site and quit after a few months.

Just a few days later, in March 2011, the workers rioted, setting fire to 60 buses and almost all of the lodgings for 16,000 employees, and bringing to a halt construction on the Jirau dam and another nearby large hydropower plant, Santo Antônio, both of which are on the Madeira river.

After bouncing between jobs on different construction sites, at the age of 50 Oliveira found himself back in Altamira, a city of 140,000 people located 55 km from Belo Monte, where he already worked in 2013 and is trying to get a job again. But things are difficult, because the amount of work there is in decline, as construction of the cement structures is winding up.

And it is possible that workers like him, specialised in heavy construction, no longer have a future in building large hydroelectric dams. The controversy triggered by Belo Monte will make it hard for the country to carry out similar projects after this. 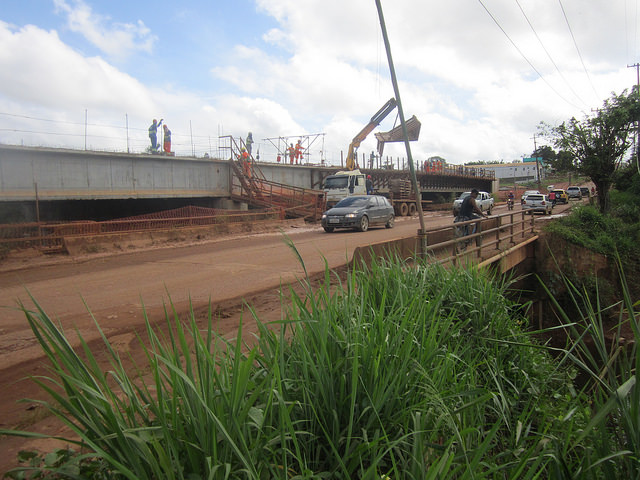 A bridge being built in a neighbourhood of the northern Amazon city of Altamira, because a small local river floods during rainy season. Works like these form part of the basic environmental plan designed to mitigate and compensate the impacts of the giant Belo Monte hydroelectric dam, 55 km away. Credit: Mario Osava/IPS

The final assessment of the Belo Monte experience will determine the fate of the government’s plans to harness the energy of the Amazon rivers, the only ones that still have a strong enough flow to offer large-scale hydropower potential, which has been exhausted on rivers elsewhere in Brazil.

A study by the non-governmental Socioenvironmental Institute states that if the government’s construction plans for the 2005-2030 period are implemented, the hydropower dams in the Amazon will account for 67.5 percent of the new power generation in this country of 203 million people.

The next project of this magnitude, the São Luiz dam on the Tapajós river to the west of the Xingú river, is facing an apparently insurmountable obstacle: it would flood indigenous territory, which is protected by the constitution.

Belo Monte, whose original plan was modified to avoid flooding indigenous land, has drawn fierce criticism for affecting the way of life of native and riverbank communities. The public prosecutor’s office accuses the company that is building the dam, Norte Energía, of ethnocide and of failing to live up to requirements regarding indigenous communities, who in protest occupied and damaged some of the dam’s installations on several occasions.

São Luiz, designed to generate 8,040 MW, and other hydropower dams planned on the Tapajós river, are facing potentially more effective resistance, led by a large indigenous community that lives in the river basin – the Munduruku, who number around 12,000.

Just over 6,000 indigenous people belonging to nine different ethnic groups live in the Belo Monte area of influence, with nearly half of them living in towns and cities, Francisco Brasil de Moraes, in charge of the middle stretch of the Xingú river in Brazil’s national indigenous affairs agency, FUNAI, told IPS. 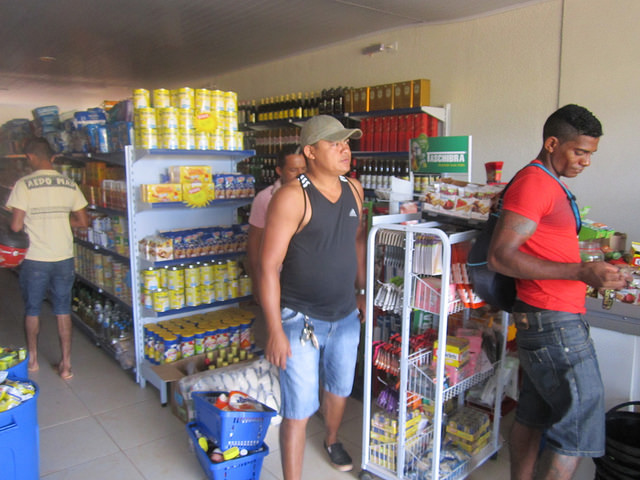 Francisco Assis Cardoso (dark tank top, centre), in his new supermarket. The young entrepreneur opened the grocery store and a pharmacy in Jatobá, the new neighbourhood in the city of Altamira where his entire family was relocated due to the construction of the Belo Monte dam in the Brazilian Amazon. Credit: Mario Osava/IPS

Another battle, for local development, has had less international repercussions than the indigenous question. But it could also be decisive when it comes to overcoming resistance to future hydroelectric dams in the Amazon.

Norte Energía, a consortium of 10 public and private companies and investment funds, has channeled some 1.1 billion dollars into activities aimed at mitigating and compensating for social and environmental impacts in 11 municipalities surrounding the megaproject.

This sum, unprecedented in a project of this kind, is equivalent to 12 percent of the total investment.

The company resettled 4,100 families displaced from their homes by the construction project and reservoir, and indemnified thousands more. It rebuilt part of Altamira and the town of Vitoria de Xingú, including basic sanitation works, and built or remodeled six hospitals, 30 health centres and 270 classrooms.

Nevertheless, complaints have rained down from all sides.

Norte Energía installed modern water and sewage treatment plants, and sewers and water networks in Altamira. But there was a 10-month delay before an agreement was signed in June to connect the water and sewer networks to the housing units, which the local government will administer and the company will finance.

And it will take even longer for the city council to create a municipal sanitation company and for the service to begin to operate.

“My family was promised three houses, because we have two married sons,” said José de Ribamar do Nascimento, 62, resettled in the neighbourhood of Jatobá, on the north side of Altamira, the first one built for families relocated from areas to be flooded by the reservoir. “But then they took away our right to two of them, maybe because I was unable to protest, since I’m ill.” 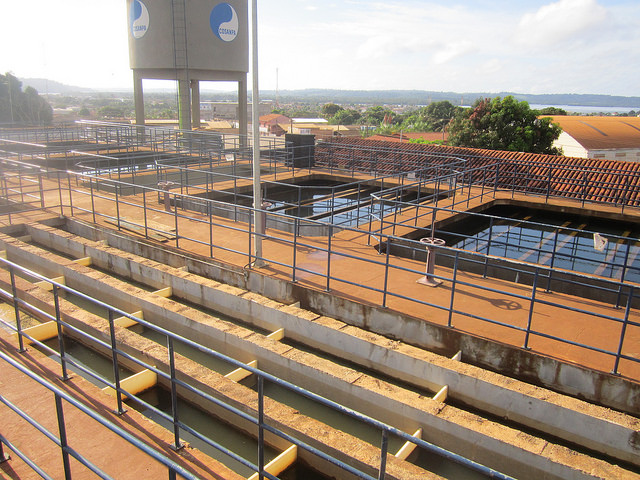 A water treatment station built in Altamira by Norte Energía, the consortium building the Belo Monte dam in the Brazilian Amazon. It is not yet operating, because the sewage network installed in the city is not connected to the buildings. Urban sanitation is one part of the development works which the company was required to provide. Credit: Mario Osava/IPS

Each 63-square-metre housing unit has three bedrooms, a living room, a kitchen and a bathroom, and is built on 300 square metres of land in a neat new housing development with paved streets.

Nascimento, who has prostate cancer, has a hard time walking and survives on a small pension. But he is confident that the future will be more promising for the local population, thanks to the jobs generated by the hydropower plant.

“We live much better here,” said his wife, 61-year-old Anerita Trindade. “Our old house would get cut off by the water when it rained; we had to wade through the water, on little walkways made of rotten boards. Sometimes there’s no water or transportation to get downtown, but now we’re on dry land.”

The move especially benefited Francisco Assis Cardoso, who at the age of 32 has become the leading shopkeeper in Jatobá. His family of four siblings was assigned five houses in a row. That enabled him to build a supermarket and a pharmacy together with his mother. “I worked in a pharmacy, it’s what I know how to do,” he said.

But Norte Energía has been criticised for delays in providing the promised schools, buses and health posts in the five new neighbourhoods, and for what many say was an unfair distribution of new housing.

A Plan for Sustainable Regional Development of the Xingú aims to go beyond compensation for relocation and other impacts of the dams. Together, society and governments choose projects that are financed with contributions from Norte Energía.

The Territorial Development Agenda was drafted on the basis of studies and consultations with a team hired by the government’s National Bank for Economic and Social Development, which financed 80 percent of the construction of the Belo Monte dam.

A third challenge for Belo Monte is to effectively combat criticism from voices within the power industry itself, who are opposed to run-of-the-river hydroelectric plants, where water flows in and out quickly, the reservoirs are small, and during the dry season the power generation is low.

Belo Monte will generate on average only 40 percent of its 11,233 MW of installed capacity. To avoid flooding indigenous lands, it reduced the size of the reservoir to 478 square kilometres – 39 percent of what was envisaged in the original plan drawn up in the 1980s.