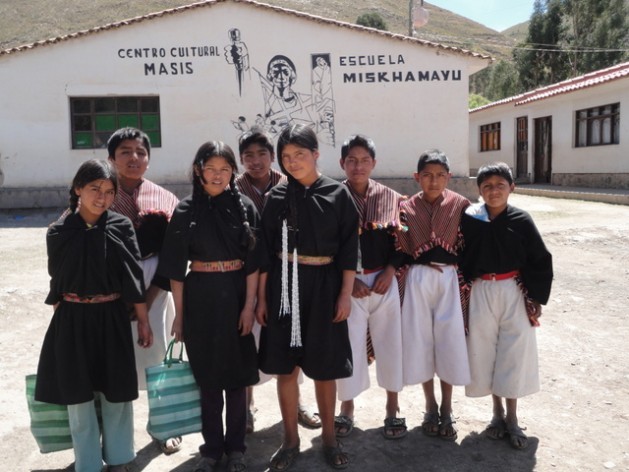 Indigenous schoolchildren standing in front of the Miskhamayu school in an isolated part of Bolivia’s Andes highlands. Many students walk 12 km or more every day, along steep roads and trails from their remote villages, to get to school. Credit: Marisabel Bellido/IPS

SANTIAGO, Aug 4 2016 (IPS) - Education, the most powerful instrument in the struggle against exclusion and discrimination, is still elusive for indigenous people in Latin America who remain the most disadvantaged segment of the population despite their wide presence in the region.

Recognition of the growing need to provide greater access to quality education for indigenous people, which respects cultural differences and local native traditions, is still far from translating into real, long-term public policies, the mayor of the Chilean municipality of Tirúa, Adolfo Millabur, told IPS.

In Chile, for example, “everyone expresses a willingness, but this isn’t put into practice,” said Millabur, whose municipality, 685 km south of Santiago, is located in the region of La Araucanía, home to nearly half of the Mapuche population, the country’s largest indigenous community.

Millabur grew up in the town of El Malo, 35 km from Tirúa. He and his eight siblings would get up every weekday at 5:00 AM and walk 30 km to school, in the town of Antiquina. After a couple of hours in class, they would all set out on the long trek back home.

He doesn’t remember how he learned to read and says he had no idea how to sign a check when he became Chile’s first Mapuche mayor in 1996, at the age of 28.

The right to education is the theme of this year’s Day of the World’s Indigenous Peoples, celebrated Aug. 9.

Access to culturally appropriate education that recognises diversity and indigenous values and specific needs, including the necessity for native people to learn their mother tongue, is considered key to combating their vulnerability and exclusion.

According to figures from the United Nations Economic Commission for Latin America and the Caribbean (ECLAC), 8.3 percent of the population of Latin America – 45 million of a total of 605 million people – is indigenous.

Next in line is Peru, where 24 percent of the population is indigenous, and Mexico, where the proportion is 15 percent.

These are the official statistics, based on the way people self-identify in the census.

According to the 2014 study “Indigenous Peoples of Latin America”, published in Spanish by ECLAC, there are 826 distinct native groups in the region. 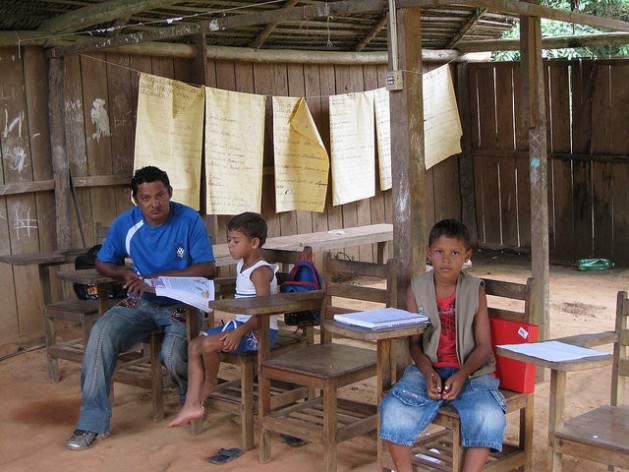 Two Juruna children at the school in the indigenous villaje of Paquiçamba, on the banks of the Xingú River in Brazil’s Amazon region. Credit: Mario Osava/IPS

At one extreme is Brazil, with indigenous people making up just 0.5 percent (900,000 people) of the population of 200 million, divided in 305 different groups, followed by Colombia (102 groups), Peru (85) and Mexico (78). At the other extreme are Costa Rica and Panama (nine indigenous peoples each), El Salvador (three) and Uruguay (two).

The Quechua, Nahua, Aymara, Maya Yucateco, Maya K’iche’ and Mapuche are the largest native groups in the region, according to the study.

Despite their large presence and strong influence in the region, the native peoples of Latin America still represent one of the most disadvantaged population groups, the ECLAC report says.

Indigenous people have not only suffered the systematic loss of their territory, with severe consequences for their well-being and way of life, but they are also the population group facing the highest poverty levels and the most marked inequality.

In this scenario, the right to education is essential to the full enjoyment of human and collective rights, and is a powerful tool in the battle to eradicate exclusion and discrimination.

“They are absent as historical subjects in the curriculums themselves, but also as social actors in the participatory processes involved in designing the curriculums,” she told IPS.

While progress has been made in recent years with regard to education for Latin America’s indigenous peoples, it is a mistake to see all of the processes as similar ”just because it is easier to work in a scenario of similarity than to address diversity,” she said.

She said education for any native group “has a different dynamic than that of our school system,” which means it is necessary to incorporate, for example, intercultural teachers in schools.

Jara cited the experience of Colombia, where there are “many different ethnic groups, which vary greatly among themselves, smaller groups, which speak specific dialects and are involved in a struggle to recuperate their territory and keep their cultures alive.”

She said that in Colombia, “indigenous cultures are gaining more recognition and understanding in rural areas…and rural schools are doing a great deal to revitalise indigenous languages.”

These efforts, also aimed at stemming the migration of young people from rural areas to large cities, are seen in some parts of Mexico as well, she added.

In the Chilean region of La Araucanía, there are 845 schools that teach Mapudungun, the language of the Mapuche people, up to fourth grade of primary school.

Of these, 300 receive direct support from the Education Ministry and the rest rely on private funding, said María Díaz Coliñir, supervisor of the government’s Bilingual Intercultural Education programme.

Under Chilean law, all schools with more than 20 percent indigenous students must have bilingual intercultural education programmes that teach Mapudungun, Quechua, Aymara or Rapa Nui, depending on the region.

Although the programme does not guarantee that children learn their native languages, it does bolster their sense of identity. “A great deal of progress has been made in helping Mapuche children have a stronger sense of who they are, and strengthening their self-esteem,” Díaz Coliñir told IPS.

Jara concurred that efforts like these would have positive results for all indigenous groups in the region. “The assertion of their rights is based on language, because it represents their world view. Beneath indigenous languages lies the cultural wealth of each native group,” she said.

She said addressing the need to bring greater visibility to native peoples as social actors, teaching their history and their link to the broader history of this country, is one of the pending tasks in the area of education.

“Today people are demanding to participate in decision-making in many areas, and indigenous people are among the social actors who must be given the most attention,” Díaz Coliñir said.