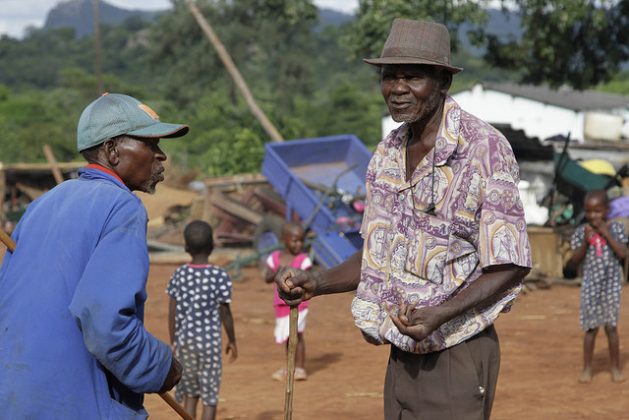 UNITED NATIONS, Sep 24 2018 (IPS) - The United Nations warned last month that the accelerating impacts of climate change—“already clearly visible today”– have triggered an unpredictable wave of natural disasters– including extreme heatwaves, wild fires, storms, and floods during the course of this year.

“If we do not change course by 2020”, cautions UN Secretary-General Antonio Guterres, “we risk missing the point where we can avoid runaway climate change, with disastrous consequences for people and all the natural systems that sustain us.”

Coincidentally, his warning was followed by the annual 2018 report by the Food and Agriculture Organisation (FAO) which singled out climate change as one of the primary factors responsible for the rise in global hunger – and for the third consecutive year in 2017.

As the UN continues to express concern over rising natural disasters worldwide, the world body is taking an active role in New York City’s “Climate Change Week” which is scheduled to conclude Sunday September 30—and takes place in the margins of the 73rd sessions of the UN General Assembly where more than 125 world political leaders are due to speak this week.

A primary focus of Climate Change Week will be the number of climate-related disasters, which have doubled since the early 1990s, with an average of 213 of these events occurring every year during the period of 1990–2016, according to FAO.

Asked about the severity of climate change on food security, Cindy Holleman, Senior Economist at FAO, told IPS the number of extreme climate-related disaster events has doubled since the early 1990s (extreme heat, droughts, floods and storms) – “which means we now experience on average 213 medium and large climate-related catastrophic events every year”.

She pointed out that climate-related disasters account for more than 80 percent of all major internationally reported disasters. Climate variability and extremes are already negatively undermining the production of major crops in tropical regions.

“So climate variability and extremes, are not only events that will happen in the future; they are occurring now and are contributing to a rise in global hunger,” she warned.

Holleman said droughts feature among the most challenging climate extremes in many parts of the world. Drought causes more than 80 percent of the total damage and losses in agriculture, especially for the livestock and crop production subsectors.

For almost 36 percent of the countries that experienced a rise in undernourishment since the mid-2000s, this coincided with the occurrence of a severe agricultural drought, she noted.

“Most striking is that nearly two-thirds of these cases (19 out of 28) occurred in relation to the severe drought conditions driven by El Niño in 2015–2016.

During the El Niño–Southern Oscillation (ENSO) event of 2015–2016, this change across so many countries contributed to a reversal of the prevalence of undernourishment (PoU) trend at the global level, she noted.

In its latest 2018 report on “The State of Food Security and Nutrition in the World” (SOFI), FAO said the absolute number of undernourished people, i.e. those facing chronic food deprivation, has increased to nearly 821 million in 2017, from around 804 million in 2016. These are levels from almost a decade ago.

The share of undernourished people in the world population – the prevalence of undernourishment, or PoU – may have reached 10.9 percent in 2017, according to the report.

Persistent instability in conflict-ridden regions, adverse climate events in many regions of the world and economic slowdowns that have affected more peaceful regions and worsened the food security, all help to explain this deteriorating situation.

The situation is worsening in South America and most regions of Africa, FAO said. Africa remains the continent with the highest PoU, affecting almost 21 percent of the population (more than 256 million people).

The situation is also deteriorating in South America, where the PoU has increased from 4.7 percent in 2014 to a projected 5.0 percent in 2017. Asia’s decreasing trend in undernourishment seems to be slowing down significantly.

The projected PoU for Asia in 2017 is 11.4 percent, which represents more than 515 million people. Without increased efforts, the world will fall far short of achieving the SDG target of eradicating hunger by 2030.

The most recent Typhoon Mangkhut, on September 15, caused considerable devastation in the Philippines.

The UN Office for the Coordination of Humanitarian Affairs said the typhoon affected 893,000 people, including over 280,000 farmers. Some 236,000 people were displaced — 70 per cent of whom are still in evacuation centres.

The typhoon damaged nearly 1,500 houses. It is also estimated that 1.22 million hectares of rice and corn have been damaged, with losses estimated at $267 million.

Still, there are some who are skeptical about climate change itself.

As Gail Collins, a columnist for the New York Times, pointed out last week the unpredictable US President Donald Trump does not believe in climate change.

“Who among us can forget the time he claimed the whole idea (of climate change) was a Chinese plot to ruin American manufacturing”,? she asked.

Guterres, meanwhile, is convening a Climate Summit in September 2019 to bring climate action to the top of the international agenda. The high-level gathering of world political leaders is scheduled to take place one year before countries are set to enhance their national climate pledges under the Paris Agreement.

“I am calling on all world leaders to come to next year’s Climate Summit prepared to report not only on what they are doing, but what more they intend to do when they convene in 2020 for the UN climate conference,” he said.

Kristen Hite, Oxfam International Climate Policy Lead, told IPS climate change is a factor leaders must take into account as we all collectively try to reach the milestones set by the UN’s Sustainable Development Goals (SDGs).

She said climate change is already compromising food security and food production, including hitting adaptive limits, with more people migrating because they cannot grow food anymore. And this is only the beginning. With every tick up on the thermometer, millions more are forced into poverty.

Hite said climate impacts on the poor happen through increased food prices, food insecurity and hunger, lost resource base for livelihoods and income, and displacement from flooding and heat waves.

“There is a big difference between 1.5 and 2 degrees, especially for crop production in Sub-Saharan Africa, West Africa, Southeast Asia, and Central and South America. The poor are hit the hardest, and rain-fed agriculture is especially vulnerable.”

As climate emissions barrel on, she said, there is more pressure to displace food farming with carbon farming. It doesn’t have to be this way- if wealthy polluters can get their emissions in check and we all embrace the renewable energy revolution, there is still time to curb this crisis.

Meanwhile, at the upcoming climate change conference, COP24 in Poland in December, there will be an attempt to finalize the rulebook of the Paris Agreement and to deliver on its promises.

FAO’s Holleman told IPS the strongest direct impacts are felt on food availability, given the sensitivity of agriculture to climate and the primary role of the sector as a source of food and livelihoods for the rural poor.

Climate variability and extremes are undermining also the other dimensions of food security. Spikes in food prices and price volatility follow climate extremes and extend well beyond the actual climatic event.

Net buyers of food are the hardest hit by price spikes: these are the urban poor, but also small-scale food producers, agriculture labourers and the rural poor. Those whose livelihoods depend on agriculture and natural resources lose income but also assets and access to food, she pointed out.

The quality and safety of food is affected by more erratic rainfall and higher temperatures: crop contamination, outbreaks of pests and diseases because of rainfall intensity or changes in temperature, she explained.

Hollleman said that stability of production and access to food is also increased by climate variability and extremes. Changes in climate also heavily impact nutrition through impaired nutrient quality and dietary diversity of foods produced and consumed impacts on water and sanitation, with their implications for patterns of health risks and disease.

Asked if some of the countries, mostly in Asia, Latin America and sub Saharan Africa, will be able to meet the SDG goal of hunger eradication by 2030, Holleman said ending hunger and all forms of malnutrition is an ambitious goal, but it is one we strongly believe can be reached.

“We need to strengthen our common efforts and work to tackle the underlying causes of hunger and malnutrition, as well as to urgently address key drivers behind the recent rise in hunger,” she said.

“ We should strengthen political will and put hunger elimination and good nutrition as a fundamental goals in the development effort. Extreme poverty, inequality and marginalization is at the roots of hunger and need to be addressed. This is universal, almost a tautology.”

Fundamental entry points to the effort to eliminate hunger is agriculture, the food system in general and social protection. “We also have to deal with the additional challenges created by conflict, climate variability and extremes and economic slowdowns.”

Addressing the root causes of conflict will involve humanitarian, development and peace building strategies which meet immediate needs while making the necessary investments to build resilience for lasting peace and food security and nutrition for all, Holleman declared.

“Meeting the challenge posed by climate variability and extremes requires that we scale-up actions to strengthen resilience and adaptive capacity of people and the agricultural and food systems.”

She added: “We need integrated—rather than dissociated—disaster risk reduction and management and climate change adaption policies, programmes and practices with short-, medium- and long-term vision.”

Meanwhile, in what was described as “an unprecedented global partnership”, the United Nations, World Bank, International Committee of the Red Cross, Microsoft, Google and Amazon Web Services have announced a plan to prevent future famines.

In the past, responses to these devastating events has often come too late, once many lives have already been lost, incurring high assistance costs.

“The FAM seeks to change this by moving towards famine prevention, preparedness and early action – interventions that can save more lives and reduce humanitarian costs by as much as 30%. The initiative will use the predictive power of data to trigger funding through appropriate financing instruments, working closely with existing systems,” the coalition said in a press release September 24.