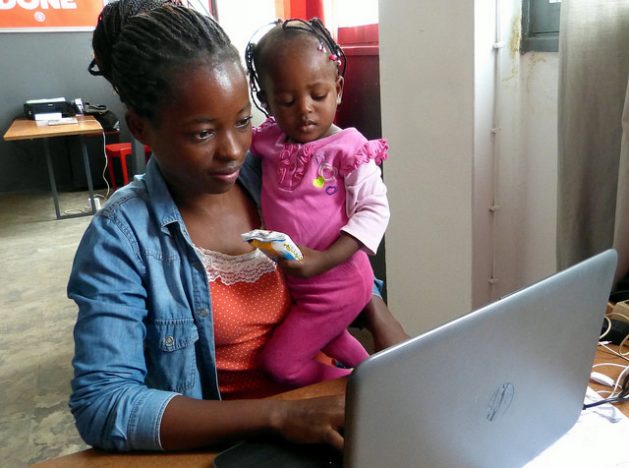 MAPUTO, Sep 14 2018 (IPS) - ‘Think Bigger’, urge the colourful posters on the walls of Ideario, an innovation hub in Chamanculo, a modest neighbourhood in Maputo, Mozambique’s capital. The message is right on target for the new female trainees, eager eyes glued to laptop screens as they learn internet and computer skills.

Ideario’s operations manager, Jessica Manhiça, tells IPS many girls initially fear using computers. Nine in 10 do not have one at home.

“I was afraid of erasing other people’s documents,” Marcia Julio Vilanculos, 25, tells IPS. In high school she paid a classmate to type her handwritten assignments.

“Overcoming fear opens the door to thinking bigger,” says Manhiça. “Girls are raised to be afraid of technology, of making mistakes, of being ill-judged as different, unconventional or masculine.”

The course starts by reinforcing self-esteem and unpacking the myth that tech is for men.

“Many parents discourage the girls from the course, worrying they will become independent, delay marriage, or exchange sex for jobs,” says Manhiça. “The young women internalise their families’ negativity.”

Not surprisingly, less than three percent of jobs in Mozambique’s booming tech sector are filled by women, reports a market survey by Ideario’s partner, MUVA Tech. MUVA Tech is a programme that works for the economic empowerment of young urban girls.

Among Mozambique’s 28 million people, less than 10 percent are internet users and only less than one in 10 users are women, according to a recent After Access survey by Research ICT Africa.

According to Research ICT Africa:

Of the seven African countries surveyed, only Rwanda has lower internet penetration and greater gender disparity.

“Our survey highlights the gendered barriers to internet access and use in particular contexts – urban, peri-urban and rural women, with low income levels,” says Chenai Chair, researcher at Research ICT Africa. “The findings reflect the gendered power dynamics that people live with daily.”

The digital gender gap is widening in Africa, warns the International Telecommunications Union.

Even Kenya, celebrated for its digital innovation and a relatively low overall digital gender gap of 10 percent, shows vast disparity among the urban poor. A digital gender audit in the slums of Nairobi by the World Wide Web Foundation (WWWF) in 2015 found that 57 percent of men are connected to the internet but only 20 percent of women are.

When women go online, they may find harassment. In Uganda, 45 percent of female internet users reported online threats, as did one in five in Kenya. The gender stereotypes and abusive behaviour found in daily life continue online.

“It is still believed in many cultures in Uganda that women should not speak at the same table as men and that includes discussions on social media,” Susan Atim, of Women of Uganda Network, tells IPS.

The WWWF research identifies the root causes of the digital gender divide: high costs, lack of know-how, scarcity of content that is relevant and empowering for women, and barriers to women speaking freely and privately online.

Systemic inequalities based on gender, race, income and geography are mirrored in the digital realm and leave many women, especially the poor and the rural, trailing behind Africa’s tech transformation. Without digital literacy, women cannot get the digital dividends – the access to jobs, information and services essential to secure a good livelihood.

Tarisai Nyamweda, media manager with Gender Links, a regional advocacy group, points out the scarcity of women role models in tech for schoolgirls. The percentage of female high school teachers ranges from fewer than two in 10 in Mozambique and Malawi to just over half in South Africa.

“We need to change the narrative so girls can identify new ways to do things,” says Nyamweda.

To be at Ideario at 8 am, Vilanculos would wake up at 5 am, to make a fire and heat water. She prepared breakfast for her husband (a car painter) and their two children. She then dropped her eldest at school at 7am and brought her baby with her to the training. During lunch she picked up her oldest and took both her children to stay with an aunt, and returned to Ideario.

“I was tired, my feet hurt,” she recalls. But the effort paid off: today she is a microworker with Tekla, an online job platform.

The use of information and communication technologies is now required in all but two occupations, dishwashing and food preparation, in the American workplace, notes a policy brief on the future of work by the Organisation for Economic Co-operation and Development.

Considering that 90 percent of jobs in the Fourth Industrial Revolution will require digital skills, according to a World Economic Forum study,  there is no time to lose in closing Africa’s digital gender gap.