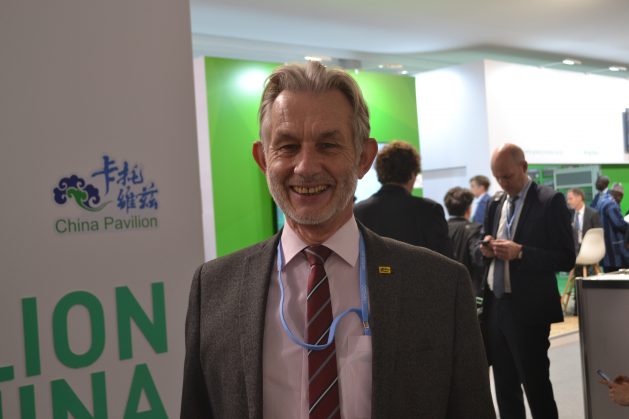 Dr. Hans Friederich, the Director General of the International Bamboo and Rattan Organisation (INBAR) is calling on the United Nations Framework Convention on Climate Change (UNFCCC) negotiators to acknowledge bamboo as an important crop that can rapidly sequester carbon from the atmosphere. Credit: Isaiah Esipisu/IPS

KATOWICE, Poland, Dec 12 2018 (IPS) - As thousands of environmental technocrats, policy makers and academics work round the clock to come up with strategies for mitigation and adaptation to climate change at the United Nations’ conference in Katowice, Poland, one scientist is asking Parties to consider massive bamboo farming as a simple but rapid way of sequestering carbon from the atmosphere.

“According to the Guinness Book of Records, bamboo is the fastest growing plant in the world,” said Dr. Hans Friederich, the Director General of the International Bamboo and Rattan Organisation (INBAR).

Bamboo is actually a giant grass plant in the family of Poaceae. Some species grow tall and many people refer to them as bamboo trees.

And because it is a grass, if you cut it, it grows back so quickly, making it one of the most the ideal crop for rapid actions in terms of sequestering carbon from the atmosphere, according to Friederich, who has a PhD in groundwater hydrochemistry.

Depending on the species, bamboo can reach full maturity in one to five years, making it perhaps the only tree-like plant that can keep up with the rate of human consumption in terms of fuel, timber and deforestation, according to experts. This is unlike hardwood trees, which can take up to 40 years to grow to maturity.

The latest International Panel on Climate Change (IPCC) report points out that limiting global warming to 1.5°C would require rapid, far-reaching and unprecedented changes in all aspects of society.

That calls for mitigation measures. And currently many countries prefer investment in forestry and reforestation mitigation.

Under normal circumstances, trees absorb carbon, and therefore it forms part of the weight of its biomass, but they take several years to do so. But when they are cut down and burned for fuel, the carbon escapes back into the atmosphere.

But now, Friederich believes that with bamboos in place people will not need to cut down trees for charcoal production because despite of it being a grass, it produces excellent charcoal that has been equated to charcoal from trees such as the acacia, eucalyptus and Chinese Fir.

“Apart from charcoal, there are many other long-lasting products that can be made from bamboo, and while they remain intact, they hold onto carbon the giant grass sequestered while still on the farm,” he told IPS in an interview at the 24th Conference of the Parties to the United Nations Framework Convention on Climate Change (COP24). Today on Dec. 12 INBAR hosted a side event at COP24 titled “Bamboo and Rattan for Greening the Belt and Road“ where the organisation shared its successful experiences and Xie Zhenhua, China’s Special Representative on Climate Change, said that bamboo could become part of China’s new Emissions Trading Scheme.

At the event, Director of Policy and Programme at United Nations Framework Convention on Climate Change (UNFCCC), Martin Frick, said that bamboo and the Sustainable Development Goals and climate change agenda went hand in hand. He also emphasised the importance of bamboo as a source of income: 10 million people in China alone are employed in the bamboo sector.

In China, bamboo is used for making drainage pipes, shells for transport vehicles, wind turbine blades, and shipping containers, among other things. It can also be used for making long-lasting furniture, parquet tiles, door and window frames and can even be used in the textile industry, among many other things.

Already, bamboo is slowly gaining popularity in some parts of the world due to its fast growth, and ability to produce long-lasting products.

Victor Mwanga retired from Kenya’s capital city of Nairobi in 2007 where he was a transport manager for a private company. He decided to start a bamboo seed production business which he called Tiriki Tropical Farms and Gardens. He is currently based in Tiriki, Vihiga County in Kenya’s Western Province.

“I receive customers from different parts of the county,” he told IPS in a telephone interview. “This thing [bamboo] has really gained popularity to a point that we are not able to satisfy the market,” said the farmer who sells each bamboo seedling for two to three dollars, depending on the size.

Wilbur Ottichilo, the Governor of Vihiga County, told IPS that his government is already investing in bamboo production. “We have started by training communities in various parts of the county on the importance of growing bamboo, and how they can make easy money from the crop,” he said.

“We are already discussing with the secretariat of the UNFCCC and the IPCC to include bamboo into the language,” he said. In some cases, he added, countries such as Kenya, Rwanda and Ghana have included bamboo in their environment, climate change and renewable energy strategies.

However, said the scientist, this calls for governments to develop policy frameworks that will allow things to happen, looking at incentives to support the private sector, build capacity – train people so they know better how to make bamboo products and roll out small and medium enterprises.