If fertility rates do not change, today’s world population of 7.7 billion increases to 21.6 billion by the end of the 21st century. That projected figure is double the commonly cited United Nations medium fertility projection of 10.9 billion for world population in 2100.

Assuming fertility rates remain at their current levels, eighteen countries, all in sub-Saharan Africa, experience the most rapid demographic growth. Each of their populations leaps more than tenfold by the end of the century.

The fastest demographic growth occurs in Niger, which has a fertility rate of 7 births per woman. Niger’s population surges thirtyfold over the century assuming constant fertility, from 23 million to 695 million. 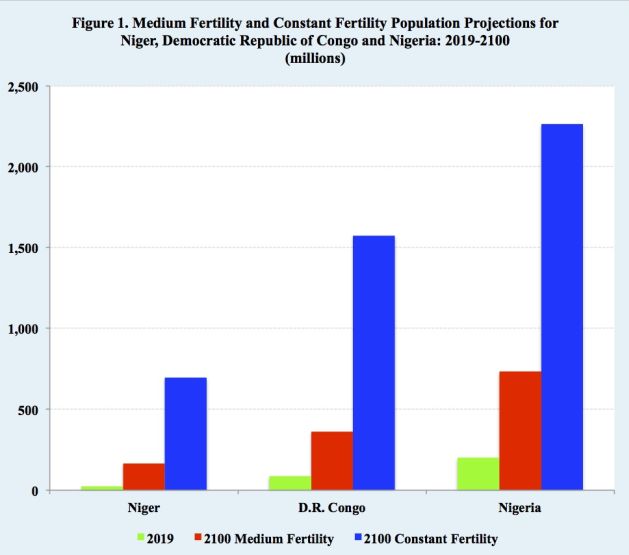 Without immigration the current populations of Australia, United States, United Kingdom and Canada are smaller by the century’s close, -7%, -9%, -15 and -29, respectively
Together those eighteen sub-Saharan African countries contribute an additional 8 billion people to the world’s population by 2100 if their fertility rates remain unchanged.

However, if their high fertility rates decline to near replacement levels by the end of the century, as assumed by the United Nations medium fertility projection, the eighteen countries contribute 2 billion additional people to world population, or 6 billion less than the constant fertility projection.

The current populations of a dozen countries, including Japan, Poland and South Korea with current fertility rates of 1.4, 1.4 and 1.1 births per woman, respectively, decline by about 50 percent by the end of the century if fertility rates remain unchanged (Figure 2). Significant declines in population size also occur by 2100 in Italy (-40%), Hungary (-39%) China (-30%) and Germany (-17%) and Russia (-15%). 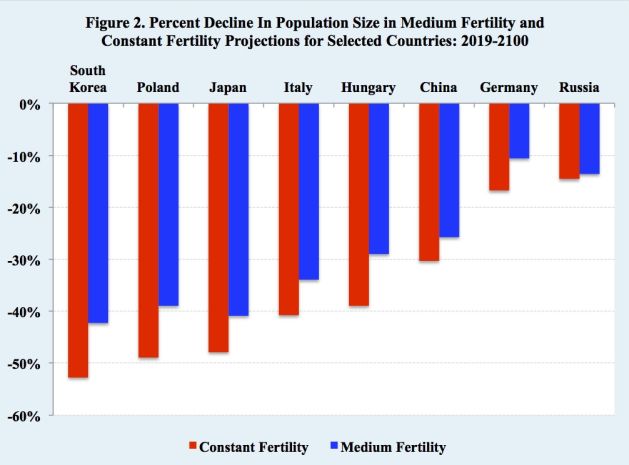 In addition to population decline, the age structures of those countries with below replacement fertility are markedly older in 2100 if their fertility rates remain constant. The proportions of elderly persons aged 65 years and older in those countries increase to unprecedented high levels, the highest being more than 40 percent in Italy, Greece, Japan, Portugal, South Korea and Spain. During the 20th century the proportion elderly in countries never reached higher than 17 percent.

Furthermore, in many countries the number in the working ages of 15 to 64 years per person aged 65 years and older, the potential support ratio (PSR), falls below two. In Japan, Italy, South Korea and Spain, for example, constant fertility rates lead to PSRs that are to close to one by the end of the century. 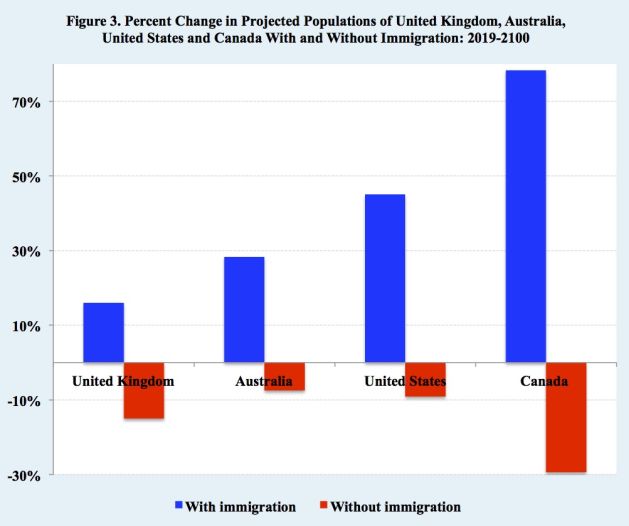 Among the forces keeping fertility rates below the replacement level are urbanization, survival of children, widespread education, improvements in status of women including increased employment and economic independence, the costs of childrearing, delayed childbearing, voluntary childlessness and reproductive health services, including modern contraceptives. Given that those forces are continuing, it is unlikely that low fertility rates will return to replacement levels in the foreseeable future.

Countries with below replacement fertility need to anticipate and plan for the near certain consequences of population decline and aging. While smaller and older populations can certainly lead to considerable societal, individual and environmental benefits, those changes also pose challenges for economic growth, retirement, pensions, healthcare and caregiving.

If the high fertility rates of countries remain unchanged, the projected future growth of those populations, which are among poorest in the world, is extraordinary. Such enormous demographic growth not only overwhelms the development goals of those countries, but also poses serious challenges to countries worldwide as well as to the planet’s flora, fauna and ecosystems.

A variety of long-term development efforts, including education for girls and boys, employment and vocational training, lower mortality and improved healthcare, contribute to the transition from high fertility rates to near replacement levels. The invaluable contribution of reproductive health information and services in reducing high fertility levels, however, can be made available now.

The costs for providing reproductive health services, including modern methods of contraception, are small compared to the considerable benefits for families and society. In addition to permitting women and men to choose the desired number and spacing of their children, reproductive health services constitute a vital component of socio-economic development and environmental sustainability.

Governments, including those of the wealthier nations, international agencies and donor organizations need to follow through on their commitments on the provision of reproductive health services. Increased efforts are needed to ensure that all women and men have access to sexual and reproductive health care services, including modern methods of family planning.

Those efforts are especially vital in the high fertility countries of sub-Saharan Africa where usage of modern methods of family planning is relatively low. Only about half of women of reproductive age (15 to 49 years), for example, have their need for family planning met with modern contraceptive methods.

It is clearly in interests of all to facilitate the transition from high to low fertility rates, especially in sub-Saharan African countries, as has already been realized throughout much of the world.