Nutrition – the Best Investment for a Developing Africa 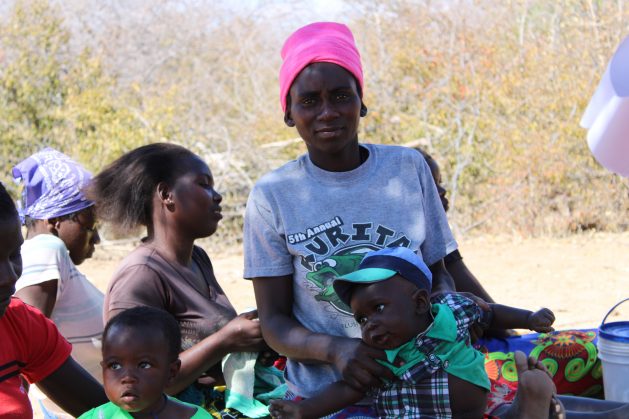 More than 237 million people are suffering from chronic under nutrition in Africa of which 32.6 million are in Sub Saharan Africa. Credit: Busani Bafana/IPS

ACCRA, Ghana/BULAWAYO, Zimbabwe, Oct 25 2019 (IPS) - There is evident correlation between countries with high levels of children under five years of age who are stunted or wasted and the existence of political instability and/or frequent exposure to natural calamities, experts say.

But current food systems in Africa are not addressing nutrition because of the combination of poor investment in the agriculture value chain, inadequate policies and lack of accountability in addressing malnutrition.

According to the Food and Agriculture Organisation of the United Nations (FAO), a healthy diet meets the nutritional needs of individuals if it provides sufficient, safe, nutritious and diverse foods for an active life and reduced disease risk. Diverse foods should include fruits, vegetables, legumes, seeds, nuts, whole grains and foods low in fats, sugar and salt. However foods that constitute a healthy diet are neither affordable nor available for many people.

“Most poor people still get over 60 percent of their calories from staple foods. Two ways in which the quality of the foods can be improved is through fortifying them by breeding in key micronutrients into the crops themselves (biofortification) and adding micronutrients to the staple when it is being transformed industrially (fortification),” said Low.

According to Low, the Continental Nutrition Accountability Scorecard is an excellent attempt to hold governments in Africa more accountable for progress on nutrition.

The scorecard is an initiative of the African Union and the African Development Bank and helps governments assess progress towards reaching their nutrition targets and to identify the right partnerships within countries across multiple sectors.

Backstopped by the growing evidence base that investing in good nutrition has positive outcomes on economic development, increasingly governments are developing multi-sectoral nutrition policies. Low told IPS that the scoreboard captures includes indicators concerning access to clean water and good sanitation, for example.

“Unfortunately, the accountability scorecard only calls for monitoring the adoption of legislation for fortification, not for the investment in development and release of biofortified crops.”

“However, the great challenge is to move from words on paper to action in the ground,” Low said.

Moving commitment from paper to reality would also require governments to make knowledge about nutrition a basic life skill and to embed nutrition education in primary and secondary school education and as part of ante-natal clinic services for pregnant women.

The international community should also support governments to take an innovative and tough stand in tackling unhealthy processed foods and changing food habits in rapidly urbanising centres through establishing international standards of behaviour in advertising and providing guidance on how to tax and regulate private operators promoting such products.

Sonja Vermeulen, Director of Programmes for the CGIAR System Organisation, told IPS that only four African countries; Benin, Namibia, Nigeria and South Africa so far are known to have national dietary guidelines.

“Most governments focus on quantity of food available (national breadbasket, maize, rice), not quality; and there is little pro-active sustained public policy work to raise nutritional standards, outside of aid programmes,” said Vermeulen.

She lamented that despite studies showing that most diets of central African countries are among the healthiest in the world, many people in low-paid urban jobs are consuming poor quality, low diversity foods such fizzy drinks and white sweetened buns for lunch.

Derek Headey, a senior research fellow at the International Food Policy Research Institute, said poor diets, largely defined in terms of excess consumption of unhealthy foods (like red meat and foods rich in sugar, sodium or fat) as well under-consumption of protective foods (like fruits, vegetables, whole grains, legumes and nuts), are now the leading risk factor in the global burden of disease.

“That’s not yet true in Africa, but it is coming because consumption of unhealthy foods is rising rapidly in the continent, especially in urban areas,” Headey told IPS. “Obesity rates are already high in many West African countries, and are now rising rapidly elsewhere, even in places where incomes are still relatively low, like Tanzania. Part of that is related to reduced energy expenditure, but of course it is also driven by poor diets.”

Heady said the consequences of neglecting nutrition are dangerous because poor diets and obesity impose significant economic costs on healthcare systems and on the productivity of the workforce.

The Global Panel on agriculture and food systems for nutrition says malnutrition is costly to African economies, accounting for between 3 and 16 percent of GDP annually. Globally, the impact of malnutrition on the economy is estimated to be as high as $3, 5 billion a year or $500 per individual as a result of lost economic growth and lost investment in human capital, according to the Global Panel.

Reducing food loss and waste could positively impact on global food security and nutrition, said the U.N., arguing that reducing on farm losses can help farmer improve their diets through increased food availability and gain more income from selling part of their produce.

“Achieving Zero Hunger is not only about addressing hunger, but also nourishing people while nurturing the planet,” the FAO said.

World Food Prize Laureate Lawrence Haddad has said the world has a huge challenge of moving from global calls for a more nutritious and sustainable system to meaningful and measurable action.

“There has to be some kind of desire or motivation to make food systems more nutrition supportive, how do you create that desire, that demand and motivation? The narrative has to change dramatically from ending hunger only to nourishing populations,” said Haddad, noting that five of the top 10 risk factors for the burden of disease relate to diet and what we eat.

Haddad is also the Executive Director of Global Alliance for Improved Nutrition (GAIN), a Swiss-based foundation launched by the U.N. in 2002 to tackle malnutrition. He told a panel discussion at the recent Alliance for a Green Revolution in Africa Forum in Ghana that data is also a critical element in making food system nutrition sensitive but data on food preparation, storage distribution, retailing, marketing and processing is not accessible in place.

He said documenting where government and businesses made commitments and kept them is important for accountability in the promoting nutrition.

“We really need to be able to adjust to new opportunities and existing and new shocks which could be conflict, climate, could be changing political regimes and could be a while range of things and the key to the ability to adapt in a dynamic way is resources and capacity,” said Haddad.