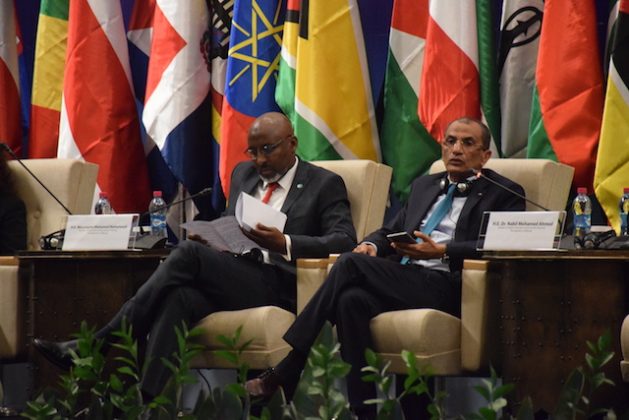 Djibouti’s Minister of Higher Eduction and Scientific Research Nabil Mohamed Ahmed (right) speaks at the International Summit on Balanced and Integrated Education, which his country is hosting. Credit: Stella Paul/IPS

DJIBOUTI CITY, Jan 27 2020 (IPS) - Djibouti’s President Ismail Omar Guelleh knows that his country is in need of an education system that is, “innovative, based on universal principles and values and adaptive of the local realities”.

With a population of  less than a million, Djibouti is one of the smallest countries in Africa. However, the number of challenges blocking its way to implementing inclusive education are massive: flood, droughts, landslides and political conflicts.

“In the past two months, we have been hit by a huge flood. Before that, we had repeated droughts. And now we have an invasion of crickets in Djibouti. So, beside the social problems, we have been also facing climatic challenges,”  Djibouti’s Minister of Higher Eduction and Scientific Research Nabil Mohamed Ahmed told IPS.

And each of these disasters takes toll on the education system.

Perhaps it is one of the reasons why his country is hosting the third edition of the International Summit on Balanced and Integrated Education, which started Monday, Jan. 27, in the country’s capital Djibouti City. Inaugurating the summit, President Guelleh telling said: “This summit is a step closer to the future we want.”

Djibouti has been making steady progress with regards to its education system, Ahmed said.

It’s been confirmed by the United Nation’s Children’s Fund (UNICEF), which found that the number of students accessing high school education increased from less than 10 percent in 2011 to over 80 percent currently.

There has also been a new focus on providing an education that can boost the employability of this Horn of Africa nation’s youth.

“When they can’t find jobs, they are pushed to terrorism,” Ahmed pointed out.

Most of Djibouti’s conflict-ridden neighbours in the region — Eritrea, Sudan and South Sudan — are not participating in summit.

But Hassan Ali Khayre, the Prime Minister of Somalia — arguably one of the most conflict-ridden nations in Africa today — said that the country has been making a conscious effort to make universal education available to all Somalis, especially girls and women.

According to UNICEF, fewer than 50 percent of Somali girls attend primary school. Low availability of sanitation facilities such as separate toilets for girls, a lack of female teachers, safety concerns and social norms that favour boys’ education are cited as factors inhibiting parents from enrolling their daughters in school.

However, at the summit, Somalia’s government claimed to have taken several measures to improve girls’ education.

“In 2017, we developed a national education policy to provide free universal education from Kindergarten 1. We have also ratified the convention on child rights, so that no child is left out,” Somalia’s Minister of Education Mahdi Mohamed Gulaid said. 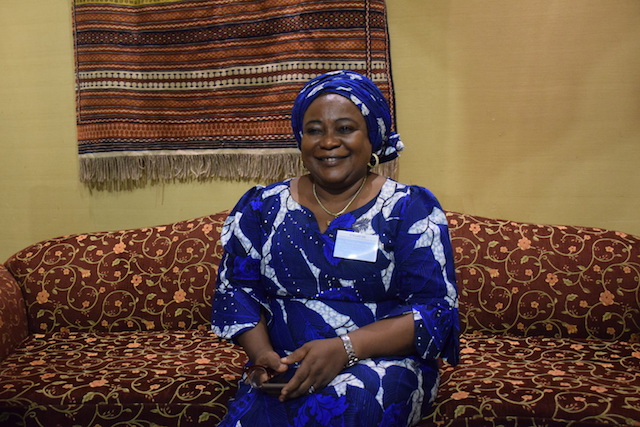 Oludoun Mary Omolara is an assistant Director at the federal ministry of education in Nigeria. The West African nation has been hardest hit by the terrorism unleashed by Islamic extremist group Boko Haram, which is vehemently opposed to school education.

The country’s northern provinces have faced several violent attacks, including the kidnapping of 276 girls from their boarding school in 2014 — who are now known as the Chibok girls.

The region is reported to have the world’s highest rate of schoolgirl dropouts and the country itself has over 13 million out-of-school children — the largest in the world.

Though Nigeria has a universal education system, Omolara said that the national policy in border areas could be more inclusive, making it capable of addressing additional, crucial, life skills needed by people in conflict and border regions.

“The borders are porous (in northern Nigeria) there is constant cross-border migration  and frequent terror attacks. In such situations, we need to provide an education that can enable both teachers and students the knowledge to tackle these issues. For example, the locals need to know safety skills, which should be infused into the education policy so that teachers know how to safeguard their students in the face of an attack,” Omolara told IPS.

On Jan. 28, UNICEF issued an emergency alert stating that nearly 5 million children in central Sahel, particularly Burkina Faso, Mali and Niger, will need humanitarian assistance this year. Violence in the region has surged, including “attacks against children and civilians, abductions and recruitment of children into armed groups”.

“When we look at the situation in the Central Sahel, we cannot help but be struck by the scale of violence children are facing. They are being killed, mutilated and sexually abused, and hundreds of thousands of them have had traumatic experiences,” Marie-Pierre Poirier, UNICEF Regional Director for West and Central Africa, said in a statement.

Nigeria, according to Omolara, has drafted a document to introduce this training in all the schools. So far, 400 people have been trained, and they in turn will train others. However, it is yet to be integrated into the national education policy, she said.

The country is also considering introducing multiple languages in its schools, especially in the border areas that continue to receive refugee students who speak different languages.

“We are an English-speaking country, but our neighbours speak French. A lot of migrants and refugees are Arabic speaking. So, we need a multi-lingual education environment.

“Also, if people are not able to understand the language of the terrorists or conflicts, they are also unlikely to deal with them. So, while we need a lot of sensitisation of people living at the conflict areas on peace education, we also must help them understand the situation and reject the terror ideologies,” Omolara told IPS.

However, there are still areas where private investment could be of help. This includes rural electricity and support for the disabled.

“Our government is doing all it can, but there are areas where we need help. For example, lack of electricity in the conflict region is a huge challenge. Some people are buying generators, but it could help to have more  private investment,” she concluded.

The 3-day summit, organised by the Education Relief Foundation (ERF), will conclude on Jan. 29 with signing of a Universal Declaration on universal inclusive education by state leaders.

** This story contains an update including information on the United Nations Children’s Fund (UNICEF) alert about millions of children in the Sahel in need of emergency humanitarian assistance this year.