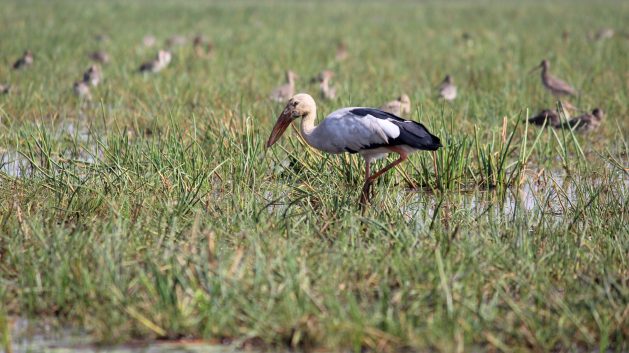 A flock of grey cranes peck for food amidst the shallow watergrass. Credit: Manipadma Jena/IPS

KOLKATA, India, Jan 31 2020 (IPS) - Ramkumar Mondal’s farm is awash in a brilliant yellow mustard bloom. A flock of grey cranes peck for food amidst the shallow watergrass. But Mondal’s fishpond digs in there like a do-or-die last sentinel as nearby high-rise buildings, a symbol of development and encroachment, menacingly tower over the fishpond, permanently blocking the eastern sun so essential for the pondwater to convert sewage into fish-feed.

EKW was designated a Ramsar site in 2002 under the convention and identified as a perfect example of the “wise use” of a wetland ecosystem.

Currently, everyday some one billion litres of wastewater, an estimated 30 to 50 percent of the sewage from central Kolkata, is drained into, treated and reused by the fishponds and again drained out to rice and vegetable farms from where, in about 30 days, the water drains into the sea.

“Where wastewater might deteriorate the entire wetland water quality, Kolkata’s wetland cleans its wastewater in just 20 days,” said Dhyani, who is also the South Asia chair Commission on Ecosystem Management (CEM) of the International Union for Conservation of Nature (IUCN).

A government baseline report prepared on the EKW prior to its designation as a Ramsar site in 2002 mentions 40 fresh-water and brackish water ﬁsh species were common, 11 of which were cultivated. Plant species found were 104.

A key insight into how the system works also lies on the reliance of the fisherfolk feeding the human-waste-turned-to-algae to their fish.

“In a conventional waste water treatment, booming algae might be an issue while, in EKW the phytoplankton and algae growth, which is nothing but optimised human waste, is regularly netted by fishermen and fed to the fish. Every hectare gets 20 to 60 kilograms of (nature’s free) feed a day,” Dhyani said.

There are also unique bacteria in the wetlands that serve as “bio-filters”.

“There are 40 species of algae, 2 species of fern, 7 species of monocot and 21 species of dicots plants plays an important role in cleaning the sewage water by reducing the eutrophication, preventing oxygen depletion and ensuring that the fish survive. Around a dozen aquatic vascular hydrophytes in the region serve as bio-filters,” said Bonani Kakkar a leading Kolkata-based environmental activist heading non-profit People United for Better Living in Calcutta (PUBLIC).

There is no indication of how long the wetlands has been functioning as a natural waste treatment plant. But it could be well over a century. The East Kolkata Wetlands Management Authority’s (EKWMA) historical timeline shows that in 1884 underground sewers to the city were laid, and by this time the waterbodies that now comprises EKW had already a number of established fish farms.

A conventional Sewage Treatment Plant (STP) would have cost Kolkata $125 million back in 2010. But thanks to this complex system in the wetlands, the city has its own free sewage treatment, according to a University of Essex study. 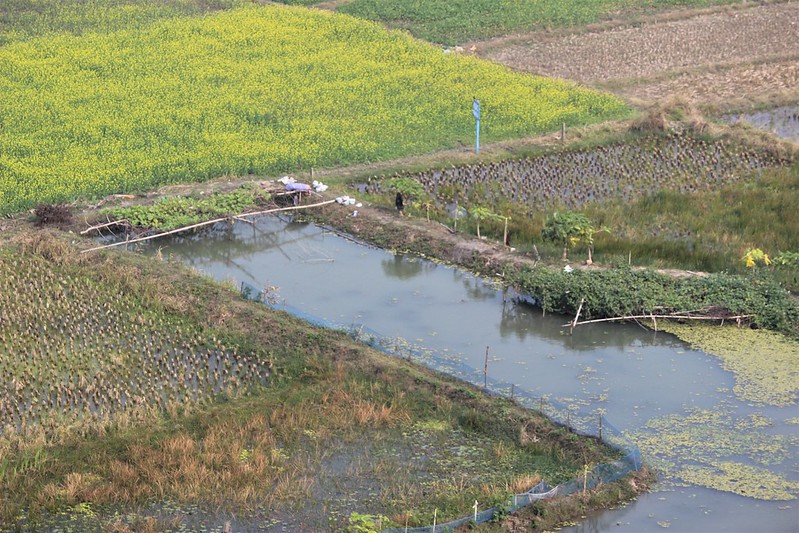 In an area already marked out for ‘development’ Ramkumar Mondal’s domestic sewage-fed fishpond makes the most of what little time is left. Harvested rice gives place to a mustard crop while a pumpkin vine perches over the water. Credit: Manipadma Jena/IPS

One would assume this unique and free natural sewage system would be highly preserved.

But Kakkar is concerned. It was Kakkar’s non-profit PUBLIC that in 1991 filed the first-ever lawsuit against land-use change and encroachment in the EKW that resulted in a major court ruling the following year.

“The 1991 public-interest lawsuit by PUBLIC was triggered by a veiled land-grab for setting up a World Trade Centre on 227 acres (90 hectares) of wetland proposed by a private company, and it was supported by the West Bengal government,” she told IPS.

Calcutta High Court’s ruled in 1992 and directed the state government to ensure no change in the wetlands’ land use.

“The EKW are yet to be demarcated (on the ground, though an official map exists) 28 years after the court order. A proper management plan is yet to be formulated,” Kakkar said.

Because of this lack of management plan and clear demarcation, there is a frenzy of building activity around the wetlands on land that was previously designated as “wetlands” but is no longer legally so and has since been taken over for development.

“From 1992 onward, PUBLIC  has had to file over a dozen complaints in court against violations of the order, including two in India’s highest court against projects that received funding commitment from the state government’s industrial development wing,” Kakkar said adding, “all of these have posed serious threats to the biodiversity, flood mitigation and other benefits offered by the Kolkata wetland.” 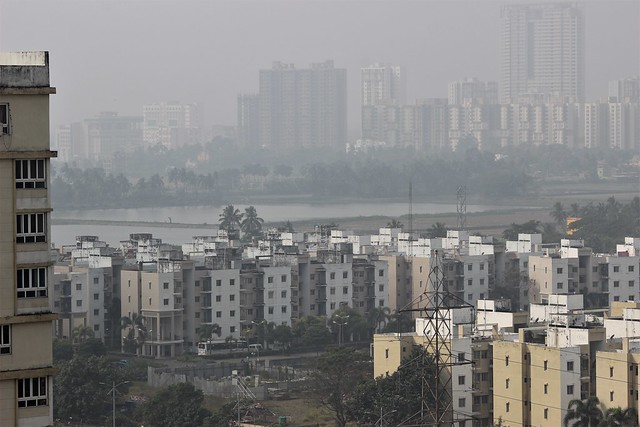 Protection, not development, of the wetlands is needed

“Ironically, some of the biggest threats have been due to the state government – large construction proposals for a flyover bridge and another to access the wetlands, for instance,” Kakkar explained.

Studies and anecdotal evidence tell of surreptitious land-use change where fish ponds are being converted to rice farms aimed eventually for small industrial or residential utilisation.

EKWMA, the government custodian, shows on its official website that 391 cases for violations it has registered with local police from 2007 till 2014. More recent updates are unavailable. Calls made by IPS to EKWMA for their response went unanswered.

But one thing is clear, between 1980 to 2000 around 2,200 hectares ﬁshponds had been converted to rice paddies.

The remaining 254 individual sewage-fed fish ponds, some single holdings sprawling over 144 hectares with the smallest being a third of a hectare, are spread over 3,900 hectares on the eastern fringes of the city, crisscrossed with canals and creeks, a dead intertidal river, Bidyadhari, and another named Kulti that carries the city’s wastewater to the Bay of Bengal.

Together they send 10,000 tonnes of fish to Kolkata’s markets yearly, fulfilling one-third of the demand in a city of over five million people.

Not having to buy commercial fish feed saves the farmers money.

And this “nutrient subsidy” fish growers get from the wetland and their low transportation cost to their market is passed on the Kolkata city folks who get fish and vegetable not only farm fresh but reportedly up to 30 percent cheaper than India’s other metropolitan cities. For the city’s poor, the wetland fish remains one of the few affordable protein sources.

Fishing and the vegetable farms in this biodiverse wetland provides livelihoods, albeit many of these are subsistence-based, to around 100,000 people including large numbers of women and children. Maintaining ﬁshponds, catching ﬁsh and carrying them to markets, sowing, weeding and harvesting vegetables and rice are among several employments, some of which get paid in kind.

Dhyani said three generations of EKW fishers’ traditional knowledge is kept alive from father to sons. Pondwater is cleaned using kerosene, lime and oil cakes; digging the ponds to the accurate depth of three to five feet to allow sunlight to the bottom, mixing the right amount of sewage, maintaining the required time for conversion of wastewater into fish feed, when to add spawns and how to protect the embankments from emerging threats of water hyacinths are knowledge gleaned from long years of experience.

But it is slowly disappearing. Like the wetlands around Mondal’s fishpond, which has long been converted for development, though a few straggler ponds remain.

Some of the younger generation have turned away from traditional wastewater fisheries owing to several factors including an uncertain future in the face of aggressive urban encroachment and demand for land for city expansion.

“My son has completed a diploma in plumbing and left last year to work in Pune [a city near Mumbai – India’s commercial hub],

“He dreams of going to Saudi Arab, says there is money there,” he told IPS, with an inaudible catch in his voice.