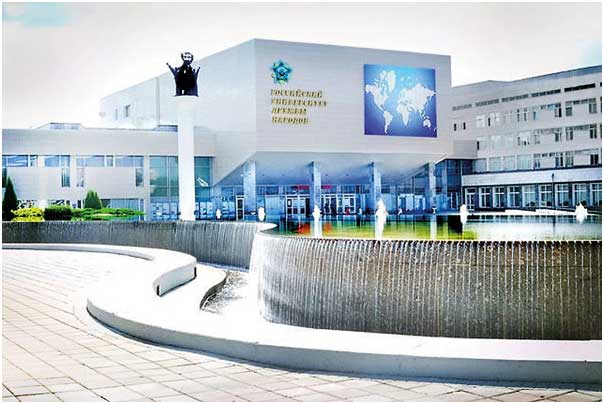 It celebrates its 60th Anniversary from 5-7 February culminating in a grand concert at the Kremlin Palace of Congress presided by Russia’s President Vladimir Putin.

In keeping with Russia’s socialist tradition of helping developing countries, Premier Nikita Khrushchev opened this University in 1960 – just less than half a century after the 1917 Russian revolution, and less than two decades after the World War II that ravaged the former Union of Soviet Socialist Republics (USSR) with a loss of over 27 million of its people.

By 1960, Russia was a thriving economy with marvels of industrialization, advances in science, technology and medicine, escapades into outer space, and basking in the glory of a Super Power.

Simultaneously, a mass decolonization was taking place liberating hundreds of countries in Asia, Africa and Latin America – that desperately required qualified cadres to develop their countries. Russia stepped up to assist them – giving birth to the Peoples’ Friendship University.

As a frequent visitor to the RUDN University since 1960’s, I have had the rare privilege of witnessing its radical transformation – the exponential growth of buildings, faculties, programs and Institutes, and its number of students.

In 1960, RUDN had 539 students from 59 countries in six faculties in different locations in Moscow. By 1964, it began to build a new campus to accommodate all faculties and students in one location – that has now grown into a mega-university.

When I defended my thesis in 1967, the dissertation committee consisted of seven eminent international jurists, chaired by Feodor Kozhevnikov, a former judge of the International Court of Justice. Even then – a high standard indeed.

The United Nations Educational, Scientific and Cultural Organization (UNESCO) was the first to recognize the high level of Degrees conferred by the Friendship University. With its well-recognized global rankings, Friendship University graduates with a Master’s Degree in any discipline could gain direct admission into PhD programs in Western Universities.

For example, I was admitted to the Hague Academy of International Law, and to PhD programs at the Vienna University, and the School of Law at the New York University purely on the grades of my Master’s Degree program but my workload and travel schedules at the UN disrupted my doctoral studies.

Today, the training of specialists at the RUDN University is carried out according to 472 programs of various levels of education, including 74 programs in foreign languages (English and Spanish) at the various faculties, institutes and academies of the University.

Among the phenomenal changes from my days in the 1960’s is that today you can follow many courses in the English medium. Regardless, all foreign students, after a year in Russia, speak fluent Russian.

Another distinct improvement is the change in 1989 from a single all-inclusive 5-year Master’s Degree Program into a multi-tiered system of higher education.

Today, RUDN offers a variety of Bachelors, Masters, and Ph.D degrees in 76 disciplines. It has more than 30 Master’s programs in English and Spanish languages, and has over 113 joint Master’s and double diploma programs with famous universities of the world.

RUDN University has about 480 cooperation agreements with universities in more than 90 countries. 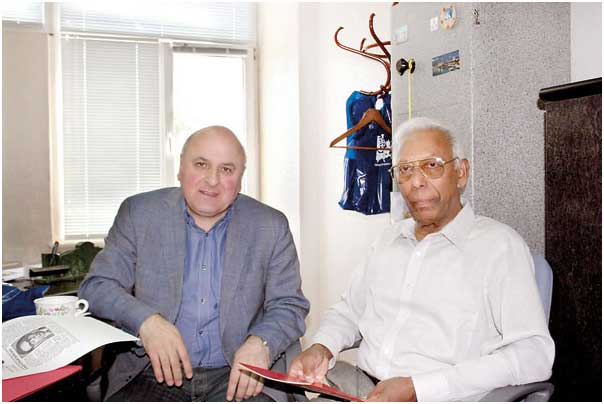 Somar Wijayadasa in Moscow, in 2014, with Prof Aslan Abashidze, Dean of the Law Faculty of the People’s Friendship University of Russia

At the helm of this astounding university is its dynamic Rector, Prof. Vladimir Mikhailovich Filippov, Doctor of Physics and Mathematics, and an Academician of the Russian Academy of Education. It is a great honor to have Dr. Fillippov as the Rector as he is an alumni (1973) of the Friendship University – for the last 15 years.

He was the Minister of Education of the Russian Republic (1998–2004), and has won many academic awards. Active in educational matters in Russia and abroad, he Chairs several educational Committees of UNESCO in Paris.

Moscow Campus: A city within the City of Moscow

The RUDN campus is located in the South-West of Moscow – about 20 minutes from the Kremlin and Red Square. It occupies 50 hectares (125 acres) and consists of 27 academic and hostel buildings, sport facilities and stadiums, a clinic and a diagnostic center, hundreds of scientific laboratories, a library, an International Club, a shopping center and 32 multinational cafés – all resembling a cosmopolitan city within the city of Moscow.

According to RUDN, the current “enrollment of students at the Moscow campus and at its Sochi Institute are about 33.5 thousand internal and external students, post-graduate students, residents and interns from 157 countries of the world”.

Referring to the vast multicultural composition of its student body, Rector Filippov says “our students not only obtain a university degree to fulfill their professional ambitions, but also gain invaluable experience in dealing with different cultures, and broaden their social and cultural horizons”.

Today, the University employs 2,800 highly qualified faculty members, including more than 600 doctors of sciences and 1,400 candidates of science, and about 150 foreign teachers. One noteworthy tradition that continues to date is the assiduous dedication of its professors who strive to ensure that all students excel in their studies, and graduate as well qualified professionals.

In keeping with its motto “scientia unescamus”, the University unites people of different nationalities by means of knowledge. In that spirit, every year, the University admits nearly 2000 students from over 150 countries. Currently, over 150,000 of its graduates, including over 6000 doctors of science (PhD’s) work in 180 countries around the world.

Its influential alumni include hundreds of ministers, judges, ambassadors, academicians, senior United Nations officials, and thousands of doctors and engineers and other professionals in hundreds of countries from Angola to Zimbabwe.

University graduates return to their countries – that have suffered for centuries under foreign rule and exploitation – to contribute not only for the scientific advancement of their countries but also to embark on their arduous struggle to win economic independence, develop their national economies, raise their cultural levels and identities, and achieve social progress.

A mini United Nations in Moscow

In 2014, my wife and I casually visited the University (as we always do when we are in Moscow) not realizing that the graduation ceremonies were in progress. The massive lobby of the main building was full of beaming graduating foreign students, their families, and Ambassadors of various countries.

That multi-national gathering – some dressed in their national costumes – and the jubilant atmosphere truly resembled a mini United Nations. As we were introduced to the gathering, many thronged around us asking questions about future employment prospects in UN Agencies.

The university has a cooperative and friendly attitude – one of respect and mutual assistance. Here everyone can make a «world tour» without leaving the campus. Traditions and customs, cuisines and garments, dancing and music – the whole world is in one Moscow street.

A beacon of hope for the world

Since 1960, RUDN has offered thousands of fully paid graduate scholarships in medicine, engineering, jurisprudence, and other sciences to provide vitally needed qualified cadres to develop those newly liberated nations. That is a magnanimous contribution – unprecedented in history.

As I pointed out earlier, over 150,000 RUDN graduates work all over the world, and in various organizations of the United Nations system. Each one of them – in their professions – prove the high standard of education they received, thereby, bringing enormous credit to Russia’s People’s Friendship University.

The golden axiom “education is the ultimate gift one can give a child” may have inspired Nelson Mandela to say “Education is the most powerful weapon which you can use to change the world”.