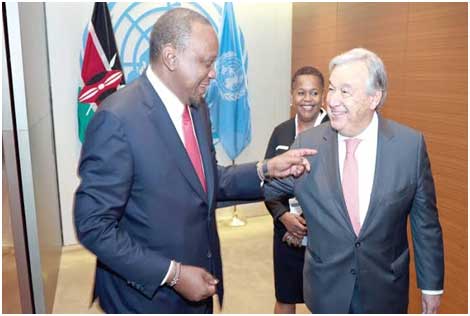 NAIROBI, Kenya, Jan 13 2020 (IPS) - One of the highlight activities as the United Nations commemorates its 75th anniversary this year will be the launch of an “annual temperature check” on Sustainable Development Goals (SDGs), progress. With only ten years left to the final whistle for the Goals, this activity that will take place each September will provide a snapshot of what’s working, and where countries need more action.

As a citizen of this great country, I am proud that Kenya was one of the leaders and architects of the open working group that led to the realization of the SDGs, led by our very own PS of Foreign Affairs, Ambassador Macharia Kamau.

The globally-agreed Goals provided the roadmap towards ending poverty and hunger everywhere; to combating inequalities within and among countries; to building peaceful and inclusive societies; to protecting human rights and promoting gender equality and the empowerment of women and girls; and to ensuring the lasting protection of the planet and its natural resources.

It is the time to consider our own progress in Kenya. Around the country, there are signposts of progress: maternal and child mortality are down, devolution is bringing development to what were once considered remote areas and school enrollment rates are rising.

The biggest challenge in Kenya, as in much of Africa, is that this progress is fragile and unequal and many in the country still feel they are being left behind. That is why President Kenyatta launched the Big 4 development agenda with a clear intention of leaving no one behind.

Corruption remains a scourge that is undermining the progress Kenya is making. The President is personally leading the fight against corruption and we are pleased that the UN is in full support.

With all the SDGs having time-bound targets, the Government of Kenya and the UN in Kenya are accelerating initiatives that will give the country respectable scores by 2030, in key sectors including health, education, employment, agriculture, affordable housing, energy, infrastructure and the environment.

There are encouraging signs that in this UN Decade of Action, the tide will turn, with the clearest sign of this being the new paradigm in SDG implementation mechanisms brought by the reforms in the UN.

The structural reforms led by the UN Secretary-General António Guterres have ushered in a new era of strengthened implementation founded on leadership, cohesion, accountability and results. In Kenya, the UN Country Team is moving very well towards being more integrated, more aligned and more effective in its response to national government priorities.

With the UN Resident Coordinator’s Office led by Siddharth Chatterjee as the hub, there is visibly better coherence in policy, partnerships and investments around the responses.

The UN Country Team has substantially increased engagement with the relevant Ministries, Departments and Agencies towards implementing the current UN Development Assistance Framework, (UNDAF) whose overall agenda is delivering on the transformative Big Four Agenda and the specific country targets of the Sustainable Development Goals.

Key features of this engagement now include joint work planning, better monitoring and transparency. In previous years, the engagement has been pulled back by insufficient coordination, with none other than President Uhuru Kenyatta flagging this shortcoming.

The UNDAF National Steering Committee is now focussed more on people and less on process, more on results for those left farthest behind, and more on integrated support to the SDG Agenda and less on “business as usual”.

This out-of-the-box approach is being recognised for its concrete footprint, as exemplified by the recent initiative to tackle cross-border challenges between Uganda and Kenya, a brainchild of the President of Kenya and fully supported by the UN teams in the two countries that was launched in September 2019.

The initiative is an example of the Government and the UN responding in new ways to the new threats we face, and specifically the new emphasis on prevention and sustaining peace for development.

The 2030 Agenda will require bold changes to the UN development system for the emergence of a new generation of country teams, centred on a strategic UN Development Assistance Framework and led by an impartial, independent and empowered resident coordinator says Amina J Mohammed, the UN Deputy Secretary General, in a video message.

No doubt, the challenge of Agenda 2030 are monumental and will require that our engagement is innovative in unlocking doors to financing and technologies, reaching out to other partners such as the private sector, foundations and philanthropies.

This is the thinking behind the co-creation of an SDG innovation lab between the Government of Kenya, the Center for Effective Global Action (CEGA) at the University of California, Berkeley, Rockefeller Foundation and the UN. The Lab will kick off with support for the delivery of Kenya’s Big Four agenda.

In the run-up to 2030, there is much that must be done to meet the tests of our time. The litmus test for the Government of Kenya and the UN will be measured through tangible results & impact on the lives of Kenyans.

Mukhtar Ogle, EBS, OGW, is the Secretary for Strategic Initiatives, Executive Office of the President of Kenya. He is an alumnus of the Harvard Kennedy School of Government at Harvard University.