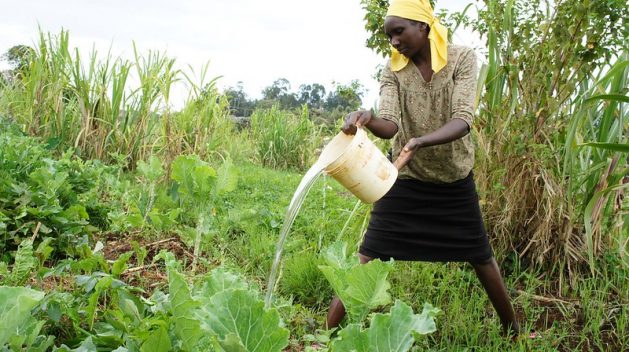 Kenya's Matrimonial Property Act, which is discriminatory towards women and inconsistent with the country's constitution, means few married women own land. Less than five percent of all land title deeds in Kenya are held jointly by women and only one percent of land titles are held by women alone. Credit: Miriam Gathigah/IPS

NAIROBI, Jun 1 2020 (IPS) - Ida Njeri was a civil servant with access to a Savings and Credit Cooperative Society (SACCO) through her employer, and her husband a private consultant in the information and communication sector, when she began taking low-interest loans from the cooperative so they could buy up land in Ruiru, Central Kenya. She’d willing done it. Part of their long-term plan together for having a family was that they would acquire land and eventually build their dream home. But little did Njeri realise that 12 years and three children later the law would stand against her right to owning the matrimonial property.

“As a private consultant, it was difficult for my husband to join a SACCO. People generally join SACCOs through their employer. This makes it easy to save and take loans because you need three people within your SACCO to guarantee the loan,” Njeri tells IPS.

“My husband had a savings bank account so we would combine my loans with his savings. By 2016, I had 45,000 dollars in loans. My husband would tell me the amount of money needed to purchase land and I would take out a loan,” she adds, explaining that her husband handled all the purchases.

By 2016 the couple had purchased 14 different pieces of land, each measuring an eighth of an acre. But last year, when the marriage fell apart, Njeri discovered that all their joint land was in her husband’s name.

“All along I just assumed that the land was in both our names. I never really thought about it because we were jointly building our family. Even worse, all land payment receipts and sale agreements are also in his name alone,” she says.

Worse still, there was little she can do about it within the current framework of the country’s laws.

Despite Article 45 (3) of the 2010 Constitution providing for equality during marriage and upon divorce, and despite the fact that  Njeri’s marriage was registered (effectively granting her a legal basis for land ownership under the Marriage Act 2014) there is another law in the country — the Matrimonial Property Act 2013 — which stands against her.

More specifically, it is Section 7 of the act that states ownership of matrimonial property is dependent on the contributions of each spouse toward its acquisition.

Because Njeri had no proof of jointly purchasing the land, upon her divorce she is not entitled to it.

Hers is not an isolated case of married women struggling to ensure their land rights.

In 2018, the Kenya Land Alliance (KLA), an advocacy network dedicated to the realisation of constitutional provisions of women’s land rights as a means to eradicate poverty and hunger, and promote gender equality, in line with Sustainable Development Goals (SDGs), released an audit of land ownership after the disaggregation and analysis of approximately one third of the 3.2 million title deeds issued by the government between 2013 and 2017 — the highest number of title deeds issued in any regime.

Odenda Lumumba is a land rights activist and founder of KLA, which is a local partner for Deliver For Good, a global campaign that applies a gender lens to the Sustainable Development Goals (SDGs) and powered by global advocacy organisation Women Deliver. She explains that the data on land ownership is a pointer to the reality that gender disparities remain a concern, especially because of the intricate relationship between land tenure systems, livelihoods and poverty.

“There is very little progress towards women owning land. There are so many obstacles for them to overcome,” Lumumba tells IPS.

In 2018, the Federation of Women Lawyers (FIDA) in Kenya petitioned Kenya’s High Court, arguing that Section 7 of the Matrimonial Property Act was discriminatory towards women and inconsistent and in contravention of Article 45 (3) of the Constitution.

The court dismissed the petition, ruling out a blanket equal sharing of marital property as it would “open the door for a party to get into marriage and walk out of it in the event of divorce with more than they deserve”.

Within this context, less than five percent of all land title deeds in Kenya are held jointly by women and only one percent of land titles are held by women alone who are in turn disadvantaged in the manner in which they use, own, manage and dispose land, says FIDA-Kenya.

But as gender experts are becoming alarmed by the rising numbers of female headed households — 32 percent out of 11 million households based on government estimates — securing women’s land rights is becoming more urgent.

“The Matrimonial Property Act gives women the capacity to register their property but a majority of women do not realise just how important this is. Later, they struggle to access their property because they did not ensure that they were registered as owners,” Janet Anyango, legal counsel at FIDA-Kenya’s Access to Justice Programme, tells IPS. FIDA-Kenya is a premier women rights organisation that, for 34 years, has offered free legal aid to at least three million women and children. It is also another Deliver For Good/Women Deliver partner organisation in Kenya.

Anyango says that in law “the meaning of ‘contribution’ was expanded to include non-monetary contributions but it is difficult to quantify contribution in the absence of tangible proof. In the 2016 lawsuit, we took issue with the fact that the law attributes marital liabilities equally but not assets”.

In addition to the Matrimonial Property Act, laws such as the Law of Succession Act seek to cushion both surviving male and female spouses but are still skewed in favour of men as widows lose their “lifetime interest” in property if the remarry. And where there is no surviving spouse or children, the deceased’s father is given priority over the mother.

Women Deliver recognises that globally women and girls have unequal access to land tenure and land rights, creating a negative ripple effect on development and economic progress for all.

“When women have secure land rights, their earnings can increase significantly, improving their abilities to open bank accounts, save money, build credit, and make investments in themselves, their families and communities,” Susan Papp, Managing Director of Policy and Advocacy at Women Deliver, tells IPS.

She says that applying a gender lens to access “to resources is crucial to powering progress for and with all during the COVID-19 pandemic, even as the world continues to work towards the SDGs”.

And even though marriage services at the Attorney General’s office have been suspended due to the COVID-19 pandemic, as have all services at the land registries, women like Njeri will continue to fight for what they rightfully own.